[Publication] No Naval Base on Jeju Island!

No Naval Base on Jeju Island! 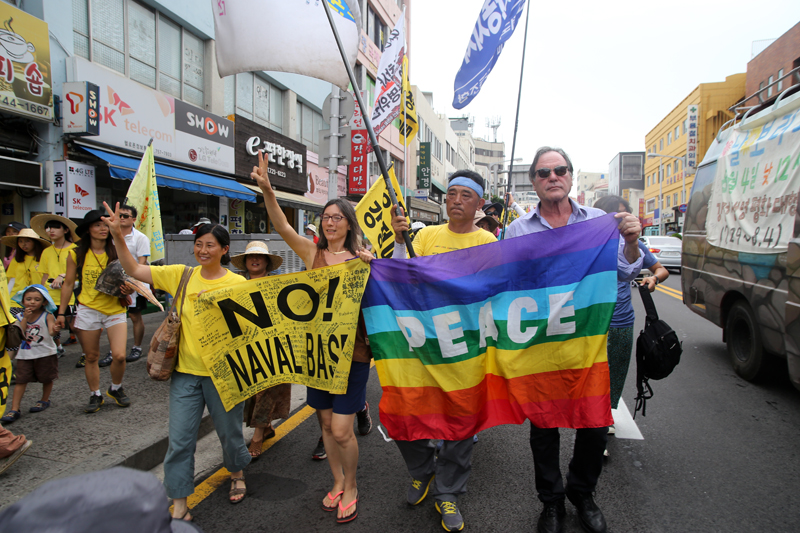 ▲ Oliver Stone, a film director, and Chief Kang of Gangjeong Village are marching together at 2013 Gangjeong Life and Peace March

Since 2007, Gangjeong villagers have struggled to maintain their peace against the construction of a naval base in Gangjeong Village, Jeju Island. Jeju Island is located at the southern part of the Republic of Korea. Peace defenders including villagers, peace activists, artists, and religious leaders have continued peaceful protests such as organising a grand march across the country to raise awareness on the issue, continuing one-person demonstrations in front of the construction site by holding a banner, and bowing one hundred times in prayer for the construction to be stopped. While peace defenders are peacefully protesting, the Government is using excessive police force to crackdown on peace defenders. The Jeju naval base construction should be stopped immediately.

Without Proper Consultation with Gangjeong Villagers

Gangjeong village was not the first place that was taken into consideration by the government as a naval base construction site. Gangjeong was mentioned only in March 2007. Initially, the government considered Hwasoon as the naval base construction site in 1994, but the plan was cancelled due to the villagers’ strong protest. In 2005, Wimi was reviewed as an alternative site for construction, but again, Wimi villagers strongly protested against it. Finally, the then governor of Jeju Special Self-Governing Province secretly had a meeting with the chief of Gangjeong village at that time to discuss the naval base construction, and an ad-hoc village meeting was convened without proper notification to the villagers.

While most villagers were not aware of the meeting, the ad-hoc general village meeting, initiated by few villagers who had been persuaded by the navy, was held on April 26, 2007. In this meeting, only 87 of 1,900 total villagers (1,050 voters) made the decision to host the naval base by measuring the volume of clapping in approval instead of counting an exact number of votes; consequently, on April 27, 2007, the village proposed, to the local government, to host the naval base at Gangjeong village. Obviously, most Gangjeong villagers strongly opposed the decision of the ad-hoc meeting since it did not follow proper procedure. According to the Gangjeong village Code, an announcement should be made at least seven days before a meeting is to be held, and it should be frequently publicized to villagers. However, the ad-hoc meeting was announced only three days before it was held.

Excessive Use of Force

The total number of police officers dispatched to Gangjeong from August 14, 2011, to August 31, 2012, is 128,401 officers, and a 4.18 billion KRW (4.18 million USD) budget was allocated to fund police force presence. Peace defenders and Gangjeong villagers who oppose the naval base construction prevent construction trucks from going in and out of the construction site by sitting or standing in front of the main gate and holding a banner. When the police intervene to facilitate traffic for the construction trucks, many peace defenders are injured, as the police grab peace defenders by the leg and drag them away, causing head injuries, and also kick their bodies and twist their joints. Even during religious ceremonies, such as catholic mass and church service, which are performed every day in front of the naval base construction business committee site, the police frequently arrest and/or use violence against participants and priests.

As of 2013, around 210 peace defenders with 53 cases, which include overlapping cases, are awaiting trial under charges of obstruction of official business. In addition, trials related to the cancellation of public waters reclamation, application for an injunction prohibiting construction, and compensation for disturbing construction are also scheduled. In total, Gangjeong Village Association and peace defenders have paid around 100 million KRW (around 100,000 USD) in fines as a result of around 50 criminal lawsuits for their actions, with individual fines ranging between 150,000 KRW(150 USD) to ten million KRW (around 9,000 USD) per person. The fines in future criminal trials are expected to reach 200 to 300 million KRW (200,000 USD to 300,000 USD). In addition, a construction company has lodged a 300 million KRW compensation claim against the chief of Gangjeong Village Association. Imposing excessive fine on peace defenders prevents them from exercising their rights and creates a chilling effect on their activities defending human rights. Even some peace defenders chose to be imprisoned rather than paying fines as a way to protest against the unreasonably imposed fines.

What Will Happen If a Naval Base is Constructed on a Wonderful Natural Environment?

Environmental Impact Assessment in Name Only

The Environmental Impact Assessment (EIA) is one of the most important measures to analyse the environmental impact of a national project. It judges the suitability and validity of the project. However, the EIA on the Jeju naval base was not substantive enough. On 5 July 2012, the Supreme Court also agreed that the content of the EIA was poor and not substantive enough. However, the Court ruled that poor content of the EIA report was not grave enough to cancel the naval base construction. Regardless the quality of the content, the Supreme Court focused more on the fact that the EIA was actually conducted which shows that the Court did not understand the main objective of the EIA.

Silt Protector is not Enough to Protect Environment.

A silt protector is installed in the middle of sea to protect pollutants from moving around by ocean current. The Cultural Heritage Administration and Jeju Special Self-Governing Province allowed construction at Gangjeong coastal waters under the condition of installing silt protectors, but it is not possible to completely block contaminated water simply through the use of silt protectors. Most of all, the southern part of Jeju Island frequently experiences large scale typhoons, which will eventually damage the silt protectors. Also, the Jeju naval base construction company does not manage silt protectors properly and, therefore, the silt protectors that have already been installed do not function properly.

Is it possible to build the Jeju Civilian-Military Complex Port?

In 2007, after facing strong opposition from Jeju islanders against a naval base construction in the Island, the Roh Moo-hyun administration promised that the base will mainly be used as a civilian port and military vessel will only call at the port. In line with this, the Lee Myung-bak administration confirmed the official name of the Jeju naval base as “Civilian-Military Complex Port” at the National Policy Coordination Meeting in 2008, and ensured that a maximum of two 150,000-ton cruise ships would be docked at the port. However, of the one trillion KRW (around 1 billion USD) budget allocated for the Jeju Civilian-Military Complex Port construction, only 53 billion KRW (around 53 million USD) is allocated for the “Civilian Port.” In addition, based on the current design, it is still not clear whether two 150,000-ton cruise ships can freely enter the port.

In 2012, current President Park Geun-hye declared to “make Jeju Island like Hawaii which is famous for its naval base”. In fact, the nearby sea of Pearl Harbor is seriously contaminated by mercury and radioactive material, and 82% of its indigenous species are faced with the crisis of extinction. As a consequence, Hawaiians import most marine products even though they are islanders. This is why Gangjeong villagers continuously urge “to let us live here peacefully” and reject false sugar-coated pledges and compensations.

Gangjeong village is located at the southern part of Jeju Island and is famous for its high waves and strong tidal current. In 2012, seven caisson structures to be used for building a breakwater of the Jeju naval base were severely damaged due to typhoons. This is a typical example showing that Gangjeong village is not an appropriate place to build a naval base. The navy also mentioned in its 2009 Basic Plan Report that “Southern part of Jeju Island has unfavourable topography condition for a grand-scale port because of its climate condition and nearby natural monuments”. Design faults are repeatedly raised because the government is enforcing the naval base construction on a site where a grand-scale port cannot be constructed.

Unqualified for Both Civilian and Military Port – High Risk of Accident

According to the “Harbor and Fishing Port Design Standards,” it is necessary to have at least a 690-meter diameter turning basin for the safe arrival and departure of 150,000-ton cruise ship, but Jeju naval base is designed with a 520-meter diameter turning basin, which does not meet the legal standard. Also, based on the current design, the sea route intrudes on the UNECO Biosphere Reserve and the Natural Monument site. Members of the Jeju Naval Base Investigation Sub-committee of the Special Committee on Budget and Account of the National Assembly pointed out that “the Navy is enforcing a naval base construction which has problems of arrival and departure of not only cruise ships but also warships.”

<Jeju Naval Base, a Threat to Peace in Northeast Asia>

Jeju Naval Base Designed Requested by the US Navy

Jeju Naval Base Will be Used as Part of U.S. Plan for China

In 2012, the Obama administration declared “Pivot to Asia” as its military strategy to check China. Consequently, on June 21, 2012, the ROK-US-Japan joint military drill was conducted for the first time, at the southern waters of the Jeju Island near Gangjeong village. The Ministry of Defense of South Korea explained that it was an exercise for humanitarian purposes, but based on the vessels participated in the exercise, it was a military drill targeting China. Jeju naval base will be an outpost of the U.S. maritime military alliance, together with Japan, targeting China, rather than a strategic point of independent national defense. With the U.S. Pivot to Asia strategy, the chances of South Korea’s getting pulled into conflicts between the U.S. and China increase.

Produced by: Gangjeong Village Association / Jeju Pan-Island Committee for Stop of Military Base and for Realization of Peace Island / National Network of Korean Civil Society for Opposing to the Naval Base in Jeju Island

Contact: National Network of Korean Civil Society for Opposing to the Naval Base in Jeju Island (People’s Solidarity for Participatory Democracy, Center for Peace and Disarmament +82 (0)2 723 4250, peace@pspd.org)