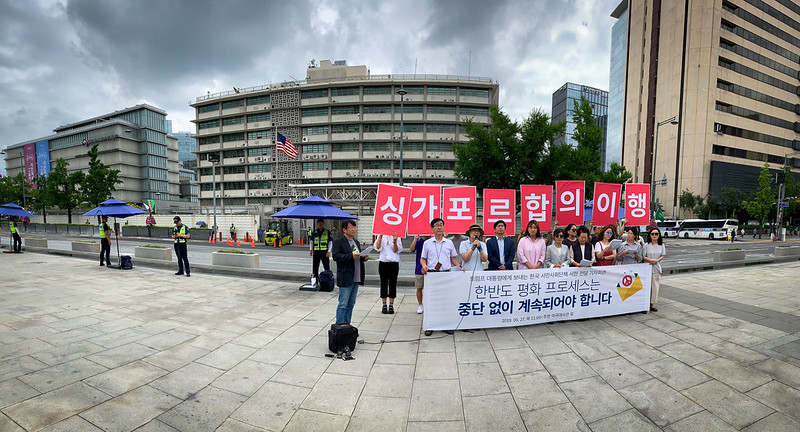 The Peace Process on the Korean Peninsula should proceed without interruption

May this letter find you at peace.

We are 27 Civil society organizations in the ROK that strive to achieve peace on the Korean Peninsula. We are concerned with the deadlock between the DPRK and the U.S. that has been ongoing since the 2nd summit between the two countries’ leaders ended without result. We are nonetheless thankful that the two leaders still harbor a strong desire to hold a third summit and to solve the problem through dialogue. In the strong hopes that Washington and Pyongyang would resume their peace-building process, which began with the rare and historic first-ever summit, we would like to urge President Trump to take note of the following, please.

The agreement reached at Singapore must be implemented

The current situation reminds us of the history of repeated failures of that “denuclearization first” demand to end the nuclear crisis on the Korean Peninsula. Neither will that insistence provide any chances for either side to break through the current deadlock. It is nearly impossible for two countries that have considered each other enemies for nearly seven decades to trust each other completely on the first try. Mutual, phased and simultaneous actions toward meeting each other at least half way are necessary for trust to develop. Once you start building trust in the process, you will be able to agree on larger issues.

‘Denuclearization as Peacemaking Process’ must be observed as a principle

The kind of complete denuclearization that the Korean people want to achieve is a state where all nuclear threats surrounding the Korean Peninsula are removed. This cannot be achieved by a “Complete, Verifiable, Irreversible Denuclearization” of the DPRK alone. It is also necessary for the U.S., ROK, and Japan to drop their “extended nuclear deterrence” policy on which they base their military strategy in Northeast Asia. This is the only way for a nuclear-weapon-free Korean Peninsula can also serve as a stepping stone towards the creation of a Northeast Asia Nuclear-Weapon-Free Zone and Nuclear-Weapon-Free world.

They said that the reason for this exceptional situation is the tightening of international sanctions imposed by the U.S. over the last few months. Thankfully, the 1718 committee granted 22 exemptions including medical aid, food, and facility and welfare support, for the first six months of this year. We request that the U.S. government side with the universal spirit and lift the sanctions against the DPRK that are related to humanitarian aid.

Inter-Korean exchange and cooperation are indispensable catalysts for peace-building on the Korean Peninsula. South Korean NGOs’ visits to, and projects for, North Korea, however, have all been stopped this year. The second the DPRK-the U.S. Summit, in particular, has led all subnational governments in the ROK, including Seoul, to suspend their programs of cooperation with the DPRK. The cessation of the dialogue between the U.S. and the DPRK leaders and ongoing sanctions have obstructed inter-Korean relations as well. We request that the U.S. government recognize the importance of inter-Korean exchange and cooperation including resuming Mount Kumgang tour and Kaesong Industrial Complex and support it by lifting all the related sanctions.

Sixty-nine years have passed since the Korean War broke out. The vast majority of Koreans on either side of the 38th Parallel today yearn for a peaceful peninsula completely free of threats of another war. We are now worried that the hard-earned chance at peace might get frustrated again amid the conflicting interests and political reasoning of countries other than the two Koreas. The peace-building process on the Korean Peninsula must be led first and foremost by the governments and peoples of the two Koreas, with respect and cooperation from other countries with stakes in the matter.

We have witnessed that peace can be achieved through peaceful means and that problems can be solved through dialogue and negotiation. Under no circumstances can we return to the past, which was riddled with heightened military tension and repeated threats of nuclear war. The path we are taking may be long and winding, but we affirm, once again, that we cannot achieve peace through means other than peace itself.

Civil society in the ROK is united in its wish for the peace-building process to progress, with the DPRK-the U.S. dialogue, on the Korean Peninsula. We trust President Trump to hear the desperate voice of the ROK citizens for peace.

The Headquarters of National Unification Movement of Young Korean Academy

The Righteous People for Korean Unification(RPKU)