2019 Awards Ceremony for the Righteous

The changes in our society this year owes greatly to the courage of people who raised their voices against unfair reality. Center for Whistle-blower Support hosts 2019 Awards Ceremony for the Righteous to commemorate them every year, this year marking its tenth.

The Committee recruited candidates from various sectors of the society in October and selected the final five, considering multiple criteria: the public report’s value magnitude and its importance, the societal contribution, backlashes, the aim, and the drive, and previous institutional recognitions. The scrupulous bravery of this year’s laurates revealed cases of corruption in private education, workplace sexual violence, internet sexual violence, distribution of illegally shot videos, and suspects of alliance with the investigative institutions. Their contribution to society must be highly praised.

Furthermore, we’ve been keeping a keen eye on the National Assembly’s discussion around the Protection of Public Interest Reporters Act. The recent revision of the bill that passed the National Policy Committee on October 30th partially improved the treatment of the whistleblowers; it criminalized institutions’ tracking of reporters and dictated that it is the responsibility of the government to subsidize part of the fee for lawsuits raised against the reporter. However, we believe this revision is not yet enough to achieve full reformation. The reform should not end here.

Even though the right to petition is a basic right guaranteed by the Constitution, the National Assembly has incompetently evaluated the petitions. The Center for Legislative Watch presented a report that shows how petitions have been treated and suggest an alternative method. Since the opening of its twentieth term (May 30th, 2016 - September 20th, 2019), the total number of legislative petitions amounts to 186. Among these, four are adopted in the original form, thirty were examined but didn’t make it up to the plenary session, while the rest, 152, is still pending. While the end of the twentieth term to the National Assembly is right around the corner, only 43 from 186 (18%) have been completed its turn of screening.

Although the National Petition is to be examined automatically right after thirty days post submission (according to the National Assembly Act), it took an average of 160 days for a petition item to be put on as an agenda. The National Assembly has not properly submitted a proposal, based on the article that allows postponement if the chairperson agrees with the executive secretary. Overall, National Petitions have been continuously neglected or postponed until the end of the year or the last day for the term of office. This defies the Petition Act’s legislative purpose.

The National Assembly is newly adopting the electronic petition policy from December 1st to broaden petition rights and make it more convenient to exercise. However, if the ineffective customs are not improved, the people’s right to petition will also become incapable.

Center for Legislative Watch has asked for specific policy improvements such as △institutionalization of open access to information regarding how legislative petitions are processed △materialization of the deliberation in legislative petition agenda through modification of National Assembly Act such as erasing articles regarding exceptions to automatic lay of bills or ambiguous deadline extension, △guarantee of petitioners’ participation in the deliberation process and the people’s right to know. 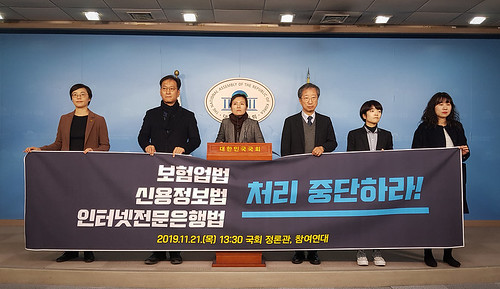 Proposing the fourth industrial revolution and economic growth as nominal reasons, the National Assembly has been pursuing the revision of the Three Data Acts – Personal Information Protection Act, Credit Information Protection Act, and Act on Information and Communications Network – which will fundamentally change the personal information protection system. The problem is that the revision proceeds hastily while disadvantages to the people, the main agents of the information, are yet to be researched. Thereby, centers that have been monitoring this topic—Public Interest Law Center, Center for Economic and Financial Justice, and Center for People’s Livelihood Improvement—have been closely tracking the discussions that pertain to each step of the revision in the National Assembly Standing Committee and participating in activities to hinder the revision.

The biggest issue is that it will enable corporations to utilize encrypted personal information under an alias for commercial research purposes and developing merchandise. In other words, even sensitive health-related information managed by the government, such as disease and genetic patient records, can be sold to enterprises and for-profit hospitals under the banner of “research.” Moreover, because of the assumed names, even though it is not hard to put to trace who each information belongs to, people’s rights as owners of the information can be nullified. Adding on to that, the enterprises will not be obligated to erase aliased information and sharing of customers’ information between companies will not be restricted. The reason The Three Data Acts are retrogressively revised is that it has the strong support of the president and the ruling party and the opposition is joining to further alleviate the regulations.

On November 6th, PSPD jointly hosted a debate with Congress members Hyeseon Chu and Jonghoon Kim, titled “Dangers of The Three Data Acts and Ways for Information Protection” to together claim that no revision should be made without the people’s agreement and societal consensus. Furthermore, on November 14th, on the verge of facing the revision evaluation of the Personal Information Protection Act at the Standing Committee, working civic society together conducted an emergency public opinion poll. Through this, we could confirm that people’s 81.9% didn’t know about such a project existed and that 80.3% of the people are against using and collecting sensitive information like political opinion, health, and medical information after they are made to have assumed names. The success of the Big Data industry should base itself on people’s trust that their information will be handled and protected safely. We will try until the end to hold back the revision. 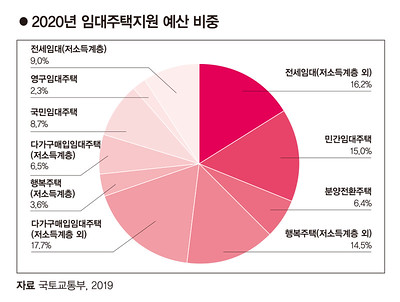 2020 Housing Urban Fund displays a freeze of growth in the overall rental house support sector and a big shortage in public rental housing for the low-income group.

In the new issue report presented by the Center for Tax Reform last October 31st, “Urge for a drastic support increase in public rental housing for the residentially vulnerable social group,” the stock number of long-term public rent housing amounts to eight hundred sixty-seven thousand, 4.3% of total available housing. While there are up to three hundred seventy thousand households that live in extremely small studios or dosshouses, the 2020 supply plan for public housing states the support type that prioritizes people below the fourth income category are just 33.2% of the total supply.

On the other hand, amongst the Housing Urban Fund’s residence account project budget of 2.6437 trillion, budget or lease support showed a 22.9% increase, the budget for the rental house budget stays the same. The priorities here are clear. Provided to the low-income group for a long-term stable residence, this public rental housing only totals 21.2%. The People’s Rental Housing and Permanent Rental housing is even smaller in number than Civic Rental Housing.

Additionally, the Tax Finance Reform Center pointed out that public rental housing is usually placed under general account transfers, and since this general account transfers are small in amount, the shortage problem cannot be alleviated. The low-income group is bound to be violated by their residential rights when they cannot possibly afford high housing fees formed in the private market of housing, not regulated through official regulations. Actions like revising housing urban fund law are necessary to be taken for the government to more actively carry out the budget fees for public rental housing. 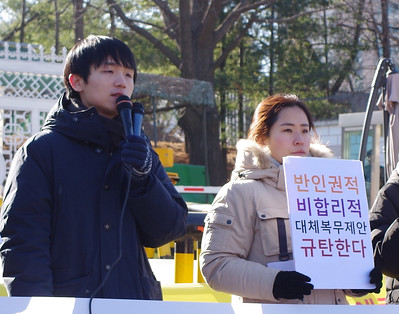 Last year on June 28th, The Constitutional Court ruled that the law that lacks regulation for military service objectors’ alternate service the military service objectors is unconstitutional and that the National Assembly should amend it by the end of this year. However, no fruitful discussions were made in Congress. Eventually, there were only two months left when the Defense Committee of the National Assembly’s Bill Examination Subcommittee began evaluating, and even the legislation that passed through still raises concern for violation of human rights.

On November 13th, Center for Peace and Disarmament delivered a written statement about “Legislation for Conscious military service objectors’ alternative service” that was drafted together with networked groups. We urged the reversal of consensus from the Subcommittee that even retreated from the original government’s proposal and to properly discuss the issue with supplements from the latter.

All problematic parts of the government’s proposal, like ‘training service in the prison for 36 months,’ were completely adapted to the law passed by the Defense Committee. Since alternative service policy aims to protect the freedom of conscience of men who are enlisted to be conscripted, it would have been right for the government to announce this to the ones being directed to, but the obligation was deleted. This is what we pinpoint as the retreat. While it is a generational vision to increase female participation in different societal sectors, the public one as a foremost sector, the female quota obligations for committee member was deleted. The fact that the Minister of Defense to name the Evaluation Committee for examining this service is another problem.

This is the first time in Korean history to codify conscious rejectors’ alternative service for the military. It shouldn’t be approached with administrative efficiency nor with the notion to rule out one who would not adjust to the army. Therefore, we have strongly criticized how the National Assembly condoned the government’s service sector without any further thoughts, discussions, nor research.