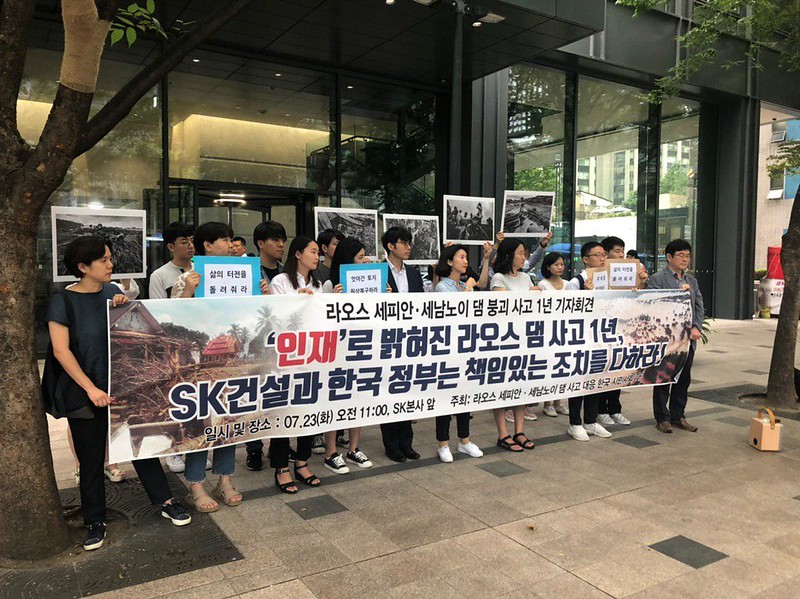 One year ago today, on 23 July 2018, Saddle Dam of the Xe-Pian Xe-Namnoy hydropower project in Attapeu Province, Laos, collapsed. The dam collapse unleashed a disaster with transboundary implications in which dozens of people were killed and thousands of residents were driven from their homes. We offer our thoughts and prayers for the 49 Lao residents who lost their lives and 22 others who remain missing. We also offer our deepest condolences to the many Lao and Cambodian residents who lost so much in this accident.

Although a year has passed, the tragedy of the dam collapse continues. Support for recovery and compensation for the loss and harm endured have been slow. The cause of the accident has only been revealed recently through an independent investigation commissioned by the Lao government, which found that the collapse was due to human error. Yet, Seoul-based SK Engineering & Construction immediately rejected the results and demanded a reinvestigation.

A year after the accident, it is still unclear when the affected residents will be able to return to their daily lives or have hope for a secure future. Living conditions at the camps are poor, and allowances are severely inadequate and inconsistent. Furthermore, the Lao government has handed over rights to cultivate areas of farmland, intended as compensation for the affected residents, to foreign companies. The project proponents have failed to provide sufficient compensation for property damage, including by setting excessively low compensation amounts. Meanwhile, although Cambodian residents also suffered heavy damages from the dam collapse, they have not received any form of compensation or redress.

Immediate steps must be taken to provide full compensation and restoration of damaged lives and livelihoods. Residents affected by the disaster are demanding official compensation. To date, no official apology or appropriate compensation has been forthcoming from the parties responsible, including the Korean government and SK Engineering & Construction. In addition , based on first-hand information gathered by our organizations during recent visits to the designated project resettlement area of Chat San, hundreds of families still continue to live without adequate basic infrastructure such as functional water pumps and toilets, and have not been yet allocated land to compensate for their losses or meet their basic subsistence needs. Before proceeding with the dam, the companies involved must also take steps to ensure the people who lost their land and homes to make way for the construction of the dam reservoir have been duly compensated and have dignified living conditions.

Safeguard policies have been established and implemented by the international community to prevent environmental, social, and human rights issues caused by large-scale development projects and protect the rights of residents. The Export-Import Bank of Korea’s Economic Development Cooperation Fund (EDCF), which implements ODA loans, established a safeguard policy in 2016. Yet, problems persist, including the absence of independent screening bodies, non-disclosure of relevant information such as environmental and social impact assessment, lack of responsibility of aid agencies in fulfilling safeguarding measures, lack of monitoring and post-evaluation measures, and the lack of responsibility of aid agencies in operating grievance procedures persist.

Preventive measures must also be taken to avoid a recurrence of this tragic disaster. The Korean government must immediately review its safeguard policy and apply it to all projects, including concessional loans and grant for development aid.

The Xe-Pian Xe-Namnoy dam collapse, took place during the administration of Korean President Moon Jae-In known for its emphasis on ‘human rights’. The project that destroyed people’s homes and stole their lives and livelihoods was carried out by SK, which claims to emphasizes ‘social values’ and the ‘right to pursue happiness’. Yet despite the ongoing devastation and loss, and the failure to provide answers, the project developers have forged ahead and construction continues.

We, the undersigned civil society groups working in Korea and the Mekong region to expose the truth and secure redress, call on the Korean and Lao governments and SK Engineering & Construction to immediately.

Take urgent steps to prevent recurrence of this tragic disaster.