The revised bill of Housing Lease Protection Act was approved by the National Assembly on July 29, allowing the lease agreement to be renewed for two more years and setting the price ceiling up to 5 percent on Jeonse (the amount of money required for a deposit on a rental place). It may alleviate the suffering of tenants who used to deal with either rental fees increased by several tens of million KRW or notification of contract termination that had made them move to another place. PSPD has ceaselessly campaigned to amend the law since 2001 so that the problem of tenants can be solved. We persistently demanded a revision of the law via media planning, civic lecture, legislative petitions and discussion meetings, and meetings with the members of the National Assembly. After 20 years of effort, the law was finally revised. There is lots of distorted news from some media that take advantage of confusion derived from the early days of the law amendment. Therefore, there are 22 questions and the answers about the explanations of a revision by each specific case that the tenants should know. We want you to get reliable information and also support the results related to a revision. 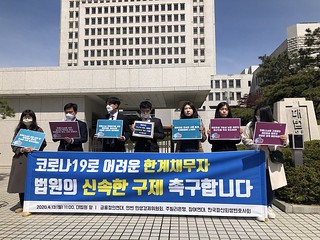 In April, PSPD urged the Supreme Court, the Seoul Rehabilitation Court, and the district courts in the nation to actively aid desperate debtors. What we urged them was that the change request for reimbursement plan of a debtor in the rehabilitation process and the process of individual bankruptcy requests should be swiftly completed and the criteria need to become simpler from the debtors’ perspectives. Also, related policy and its process should be actively notified to the desperate debtors. In accordance with PSPD’s statement, Seoul Rehabilitation Court responded to the statement and revised the practical regulation. The court, which used to be strict on the criteria of debtor rehabilitation and bankruptcy, became forward-looking and arranged a criterion on the rehabilitation of the desperate debtor. Moreover, the court specified that the long-term loss in income by involuntary unemployment would become the reason for a special exemption for a personal debtor in the rehabilitation process. The court also reformed the practical regulation so the council members of personal debtor rehabilitation could inspect involuntary unemployment status and report it to the judge. The changes have been notified on the website of the Seoul Rehabilitation Court in order for individual debtors to get information.

In April, PSPD demanded the temporary aid plans, such as rental fee moratorium, the prohibition of compulsory eviction, rental fee exemption and deferment for public housing, expansion of financial aid for housing, and provision of emergency disaster financial aid, for those who had become unemployed and who are in the vulnerable social group and tenants. Hence, Korea Land and Housing Corporation (KLHC) allowed the tenants of permanent public housing not to pay the rent for six months. In addition, Seoul Housing and Communities Corporation and the local housing corporations introduced policies that support the basic livelihood act recipients and that allow the tenants of the commercial properties leased from the local public enterprises to pay 50% less rental fee for six months.

➌ The City of Seoul, Supporting the Property Appraisal for Reduced Claim of Rent 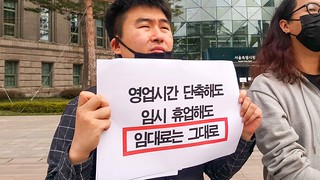 PSPD demanded measures to the fulfillment of the local governments, reducing the rent and implementing a temporary prohibition of compulsory eviction from March, for the tenants of the commercial properties who were at the risk of a serious decrease in revenue. Furthermore, PSPD had meetings with the Ministry of Justice and the Seoul government to convey the demands of the tenants. The National Assembly received the bill about the temporary prohibition of compulsory eviction, and the governments of Seoul and Kyungkido has been fulfilling counsel and arbitration about the reduction of rent. The city of Seoul, especially, has been supporting the tenants in case of dispute conciliation so that that they can get the property appraisal, regardless of the approval of landlords, sponsored by the local government in order to alleviate a burden. In addition, Seoul provided the monthly financial aid of seven hundred thousand KRW for two months to the tenants, which can be used either for the rent or for labor cost, separately with emergency disaster financial aid.

A Decision of the National Rights Commission, guaranteeing of whistleblower’s status in the Korean Horse Affairs Association

A public enterprise is subject to a field survey on customer satisfaction conducted by the Ministry of Strategy and Finance. The results of the survey are reflected in public enterprise management evaluation, and therefore, they affect how much performance-related pay goes to each public enterprise. In order for transparency of management to be secured, a subject of a field survey is supposed to be randomly selected. However, this rule was violated in the Korean Horse Affairs Association (KHAA). The media reported that KHAA had manipulated a field survey by sampling the friendly customers as the subject of a survey so that it could receive a good record on the customer satisfaction evaluation. The whistleblower, who reported this fact to the audit division and the media, was summoned to the disciplinary committee and was dismissed.

Activities Urging the Expansion of Public Hospitals and Medical Personnel

Thanks to the devotion of medical personnel to cope with COVID-19, Korea was able to overcome the adversity of initial proliferation from March to April. However, it simultaneously revealed a vulnerable public health system of Korean society; the fact that the lack of both sickbeds and medical personnel dealing with the pandemic was disclosed. Unless public hospitals and public health manpower are expanded to reinforce public health service, the countermeasures against COVID-19 will become temporary.

PSPD has been arguing since March that the government urgently needs to expand the public health organizations and medical personnel and strengthen public control over public hospitals. In addition, PSPD held a discussion session to design a policy task and alternatives to prevent the spread of the current infectious disease. Last May, we completed the signature campaign urging the establishment of a local public hospital to substitute Jinju Hospital and have conveyed it to its local government. PSPD intends to expand this movement to other regions.

With the social opinion agreeing with the necessity of public health system expansion, the government declared the plan to gradually increase the capacity of medical schools by 4,000 over ten years on July 24. It is not a plan merely increasing the number of doctors, but the one reinforcing the public health care and solving the gaps in healthcare between the locals that still has many things to make up. In this situation, the Korean Medical Association (KMA) took a group leave from August 26. PSPD urges KMA to be loyal to its mission of protecting citizens’ health more than just seeking its own interests. [Fact Check] Why do doctors disagree on the increase in the number of medical school students? In addition to the expansion of public healthcare, PSPD continues on activities to introduce and expand the accident and sickness benefits and the paid sick leave for those citizens who live from hand to mouth.

A Public Inquiry about the Prosecutorial Investigation review committee 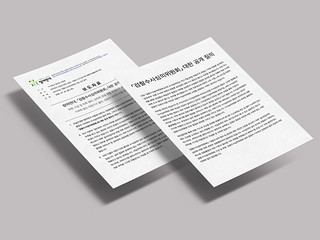 The Prosecutorial Investigation Review Committee (PIRC) has got attention due to continuous no prosecution and monition to terminate the investigations on the suspicion of illegal management succession of Lee Jaeyong, the vice president of Samsung. The case of collusion between the Prosecution and the media also made PIRC become more notorious. Even though PIRC has been established to strengthen the trust of the citizens toward the prosecutorial investigation procedure and result, PIRC’s organization and management process are not transparent. How a considerable amount of investigation data and cases are reviewed is confidential, and what factors have been activated to ensure its fairness has not been properly open to the public. The citizens only could hear the news that Yang Changsu, the Chief of PIRC, had decided just within a day and that it had been conventional that the prosecution had had to accept the decision.

Besides, when individuals directly involved in the incidents of Samsung and the collusion had requested, PIRC immediately responded to them; however, PIRC has been silent about the abuse of workers with disabilities although the investigation had been stagnant for five months. PIRC managed by the irrational review and management procedures is a tool to let someone become free against the justice of the law.

On July 29, PSPD publically inquired of management and review problems of PIRC to the Supreme Prosecutors’ Office. Accordingly, the prosecution presented that they would examine the overall method to improve regarding the inquiry. But, they were still adherent to become opaque about the committee organization and contended that the organization had been appointed by the exogenous recommendations and by the lottery system. It may be at least interpreted that the prosecution paid attention to the inquiry of PIRC’s controversial issues. PSPD insisted that PIRC should not become a loophole letting the prosecution avoid its responsibility for the incidents that they are uncomfortable to handle. Hence, as PIRC cannot monitor the exclusive right to the indictment of the prosecution, PIRC has to be re-examined rather than being improved.