“Even My Disease Information and Shopping History?”

Opposition to the Commercialization of Personal Information Promoted by the Government

These examples mentioned above are likely to be realized in accordance with the Financial Services Commission's authoritative interpretation, the Health and Welfare Ministry's guidelines for the use of health and medical data, and the government's enforcement ordinance on “MyData” business (Credit Information Act). The government is trying to commercialize the citizens’ personal information data just because they have been pseudonymized, without the consent of the citizens, from the perspective regarding the personal information as one type of industrial matter.

The majority of citizens are in a situation that their backs are against the wall due to COVID-19. On September 9 and 11, PSPD held a press conference with the Labor organization, Health, and Medical organizations, and Small and Medium Business Merchants Group to urge them to come up with urgently needed measures for people's livelihood and a social safety net. 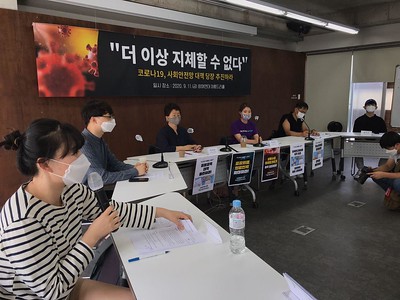 On the 9th, we demanded the measures to support the self-employed and working-class families suffering from immediate damage:

△ For commercial buildings and houses, amending on Act activating the right to claim a reduction so that tenants can claim a reduction in rent, and to prohibit the termination of contracts for a temporary delay in rent

△ Supporting for those who have been forced into marginal debt due to reduced income, unemployment, and closure of business

On the 11th, we demanded necessary social safety net measures under the situation of Corona 19:

△ Immediate abolition of the basic living security system's mandatory self-sufficiency standard for living benefits, temporary exceptions to the survey on self-help standards and ability to work, and preparation of emergency housing measures for homeless people

Since the outbreak of COVID-19, PSPD has been working on policy demands for self-employed people and working-class families, and also for urgent preventive measures, expansion of public health care to be settled.

“19 Groups and 30 Affiliates... Embezzlement & Malpractice, Illegal Profit-Taking, Excessive Concurrent Employment.” The National Pension Service Ought to Exercise of Shareholder Rights Against These Companies.

NPS declared two years ago that it would actively exercise shareholder rights (Stewardship Code) against companies undermining people's precious assets by seriously damaging corporate value. However, among those companies in which NPS has been investing, there are several companies that are legally sanctioned or that are on trial by prosecution charges, due to the embezzlement and breach of trust of the head's family members, unfair support activities, private interest theft, etc. Not so many companies have a board of directors being responsible for or taking appropriate action either. Nevertheless, NPS did not exercise any shareholder rights except for a shareholder proposal in March 2019, which included the loss of former Hanjin Group Chairman Cho Yang-ho's board position.

PSPD urged NPS to fulfill its responsibilities as a sincere trustee in managing national retirement assets, by presenting the list of troubled companies. We intend to continuously monitor the troubled companies and to voice our opinions at the shareholders' meeting of the companies next year. Moreover, NPS became the second-largest shareholder in July after having continuously purchased shares of Lotte Tour Development, a Jeju Dream Tower resort operator. Therefore, it made NPS a shareholder of a company with casinos as its core business. Even though the rate of return on retirement funds entrusted by the citizens is an important matter, investing in a company with casinos as its core business seriously undermines the public nature of the National Pension Service.

Petition of Consent of the governed for the Punishment Act on a Corporation with Serious Accidents – 100,000 Citizens Signed on the Petition

On September 10, one more casualty occurred at the Taean Thermal Power Plant of Korea Western Power Corporation, where its labor, named Kim Yongkyun, had died. Death engendered by industrial disasters keeps happening at the place where other casualties have already been victimized. South Korea is the country that approximately 2 thousand laborers were dead from industrial disasters only in the year 2019. As of September 23, 388 died from COVID-19 that has been making the whole country suffer. A supervisor, who was supposed to be in charge of the workplace at which Kim Yongkyun had died, has not been punished yet. 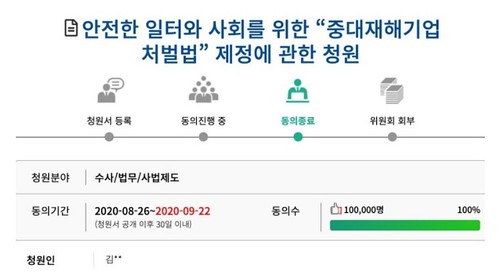 On the ground of a subcontract and irregular worker’s contract, a corporation eschews its responsibility for the risk of industrial disaster and solely seeks a profit. Therefore, the life and safety of workers are continuously ignored, and no one takes responsibility for them. PSPD suggested what would have to be legislated for the 21st National Assembly to make who is responsible for the industrial disaster and to prevent a subcontract for risky work. On September 22, 100,000 citizens signed on the petition, urging the legislation; hence, the consent of the governed has been validated.

Besides, a courier’s death by overwork has become a critical social problem. PSPD has formed a committee for overworking delivery workers with the courier union. The committee requested the deployment of additional personnel for the pre-classification work, which is the biggest cause of overwork, ahead of delivery during the peak season for the Chuseok holiday, and the government and the delivery industry agreed to accept it. It is all because of the citizens who supported the delivery workers with the heart of "It's okay to be a little late." The Punishment Act on a Corporation with Serious Accidents and 100,000 civil petitions for support for delivery workers represent the hope that no one will die while working.

In September, PSPD expressed its opposition to the Justice Ministry's enforcement ordinance for the adjustment of investigative powers between prosecutors and police and submitted a letter of opinion to the Ministry of Justice.

The Act on the Adjustment of the Investigation Authority of the Prosecution and Police, which was amended in January 2020, limited the direct investigation of the prosecution to only six major crimes (related to economic, corruption, public officials, elections, defense projects, and major disasters). However, it was frustrating that these crimes were the majority of the areas of direct investigation by prosecutors. The Enforcement Decree of the Ministry of Justice, which had recently been announced, added drug and cyber terrorism crimes to it, and vaguely expanded its scope to include cognitive and related crimes against the six major crimes directly investigated by the prosecution. In fact, it is nothing but just the prosecution's willingness to intervene in all criminal investigations.

In addition, the Enforcement Decree of the Ministry of Justice has set the enforcement date to January 1, 2022, with a grace period of one year, unlike other law on the adjustment of investigative rights, which limits the ability of the suspect's interrogation report prepared by the prosecutor. Confessions made by a suspect in a criminal charge to the police cannot be used as evidence unless they are admitted by themselves in court. However, even if they were false confessions, they are accepted as evidence at the discretion of the judge.

As an investigative prosecutor, some prosecutors were tempted to get answers from the suspect and write them in the report; some reports are actually made-up words that the suspect did not even say. Judges have also adopted the prosecutor's report as evidence without any particular doubt, and it has been a problem in the trial process. In May, the Supreme Court also contended that there would be no problem with the trial even if the capability of evidence of the suspect's protocol of examination was immediately limited. Yet, the enforcement ordinance of the Ministry of Justice, which was supposed to reform the Prosecution, gave a grace period until January 1, 2022.

Citizens did not hold candles for the counterfeit prosecution reform. The Ministry of Justice should seek a genuine prosecution reform for the people, more than just pretending. PSPD will continuously urge the National Assembly and the government to establish a full investigation office for high-ranking government officials and adjust the investigative authority of the prosecution and police.