It’s already a mid-autumn but efforts of Sewol Ferry victims’ families started in spring to find the truth hasn’t bear fruits yet. Some families are still demonstrating against the Blue House in front of the Cheongwoon-dong office neighboring PSPD. The Saenuri Party and the New Politics Alliance for Democracy (NPAD) drew the third compromise agreement on 30 September regarding Sewol Special Act but bereaved families were very disappointed by the fact that it excluded a participation of the families in the process of recommending special prosecutors. At additional negotiations followed, the Saenuri Party even insisted that a chair person of a probe committee as well as special prosecutors should be appointed by the President. It did not hide its intention to protect the Blue House from no-sanctuary probe and disable independent investigations.

The government and a leading party have shown incapability in saving lives from sunken Sewol Ferry but all national authorities are moving very systematically to protect and save the president from finding the truth. Even worse, that rescue plan disrespects, drives bereaved families into the corner and temporizes their real intention. That’s why Sewol families are going through a very hard time at the moment.

● The movement for Sewol Ferry Special Act legislation
▶ The <Group to promote social dialogue for Sewol Ferry> urged cooperation among the president, a leading and opposition parties on 30 September in order to appoint special prosecutors independent from the government and a leading party so that a probe to find the truth can be executed without sanctuaries. The group is consisted with more than 20 people from civil, social and religious fields including Chung Bake-hyun (co-representative of the PSPD), Kim Young-ju (general affairs director of NCCK), monk Dobeop (president of the reconciliation committee of Jogye order), Lee Seon-jong (administration officer of Won Buddhism) and father Chung Sung-hwan (general affairs director of Social Welfare Committee of Catholic Bishops’ Conference of Korea).

▶ Even so, the Saenuri Party and the New Politics Alliance for Democracy agreed on 30 September to exclude Sewol families for recommending special prosecutors. Hence, the Council of bereaved families instantly expressed opposition against the compromise agreement.

▶ The People’s council for the Sewol Ferry Disaster held a national representatives meeting on 2 October and denounced that the compromise agreement made on 30 September failed to have measures for securing independence from authorities. Representatives argued that involvement of Sewol families are not a choice but a start line of finding the truth so that opinions and participation of bereaved families must be guaranteed for composing a probe committee, public hearings and even in discussions for securing the right to investigate.

▶ Concerning a briefing of the Prosecutor’s Office on 6 October, the People’s council for the Sewol Ferry Disaster pointed out that prosecutor’s has cut tails by putting government’s faults on a few coast guards, and disguised the fact as all responsibilities are on a Ferry captain, crews and dead Yoo Byoung-on. It also insisted that what prosecutor’s said made it clearer why it is essential for a finding the truth committee to execute no-sanctuary, independent investigation and indict.

● Committee for Fair Labor Society
▶ On 7 October, the result of surveying Seoul district offices on living wage system was released. 21 district offices out of 22 except Jung-gu have answered and 11 expressed favor. Therefore, it made 14 offices including three which have been already implementing or in preparation. On the other hand, Seocho, Gangnam and Songpa so called ‘Gangnam three districts’ have opposed.

● Center for Tax Justice and Budget Priority
▶ <Short report on top 1% of Korean; the first series> was presented on 23 October. This infographic report shows that top 1% consists of top 6% in labor income but 44.8% and 72.1% respectively in terms of interests and dividends income from enormous capital and investments. In addition, the report pointed out that top 1% occupied 12.23% of total gross income in 2012 which has increased compared to 6.58% in 1998 and 11.76% in 2010 confirming that polarization has worsened in both income and capital.

● Public Interest Law Center
▶ PSPD held a press conference on 1 October in front of the Supreme Prosecutors Office. It expressed opposition against prosecutors’ policy to reinforce investigation of cyber defamation and submitted a written request to stop censoring the internet. Furthermore, PSPD denounced the background of the policy because it was announced two days after the President Park made a comment at a cabinet council meeting.

▶ The Center published a report on 16 October which analyzed 40 legal cases of ‘Shut the people’s voice’ during Lee and Park administration and argued that the government should stop trying to block criticism by bringing it to the court. It explained that the report was published to remind infringement of the right to freedom of expression was the cause of cyber exile which drew attention of domestic and international press.

● Center for Administration Watch
▶ A written request was sent to the Ministry of Foreign Affairs on 15 October asking for an apology and prevention measures concerning answers of Foreign Minister Yoon Byung-se at an inspection of government offices on 7 October. He said misusing project expense cases were not embezzlement and denied giving a disadvantage to a whistle blower.

▶ PSPD presented a statement on 23 October in regard to restructuring government agencies after Sewol Ferry sank. It pointed out that restructuring would not help resolving problems without having a right diagnosis but rather worsen the situation. It also expressed concerns that government’ plan would weaken functions of National Emergency Management Agency and Korean Coast Guard which response and handle the situation up front. Furthermore, Ministry of Public Security and Safety doesn’t seem to be able to act as an control towel because it is established under the Office of Prime Minister which does not have substantial authority

● Center for Peace and Disarmament 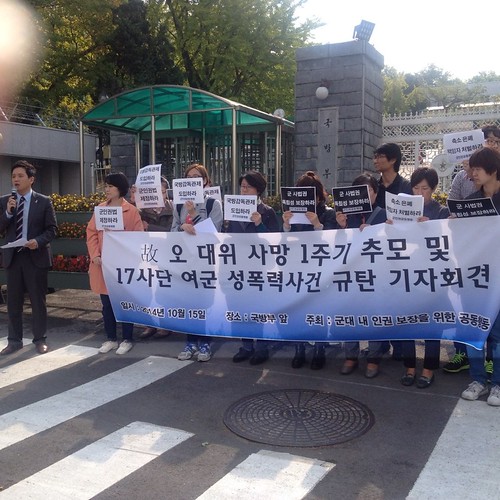 ▶ The Center is actively working to stop rearmament of Japan and military cooperation of Korea, US and Japan. It is also trying to improve human rights within the Army.
▶ The Center held a press conference on 24 October protesting against outcomes of Korea-US defense ministers’ talk. In the 46th ROK-US Security Consultative Meeting, two ministers agreed to indefinitely postpone returning of wartime operational control which was scheduled in 2015 and remain Korea-U.S. Combined Forces Command (CFC) in Seoul. The decision to remain CFC and U.S. Army's 2nd Infantry Division in Seoul Metropolitan violates agreements made in 2006 to move US Army bases and postponing wartime operational control also breaches the promise with the people who have believed self-defense and agreed to spend defense budget for it.

▶ <Joint response of Civil Society for defense and security education problems> including PSPD organized a meeting with Seoul Office of Education on 9 October and talked about security education for students. It was an occasion to inquire Seoul Office of Education on prevention measures concerning the incident last July of which students were emotionally shocked by brutal contents of ‘Patriotic education’. In response to that inquiry, they said to give a shape to ‘Democratic Citizen Education’, ‘World citizen education’ and ‘Reunification education towards compromise and the peace’.

● International Solidarity Committee
▶ 18 organizations for human rights, labor, civil, social and public interests including PSPD held a press conference on 2 October in front of a statue of the King Sejong in Gwanghwamun to express support for democratic demonstration of Hong Kong(Special Administrative Region of China) citizens and urge the Chinese government to stop suppressing them. It was held holding umbrellas open as Hong Kong(Special Administrative Region of China) citizens used them to ward off tear gas fired by the police.