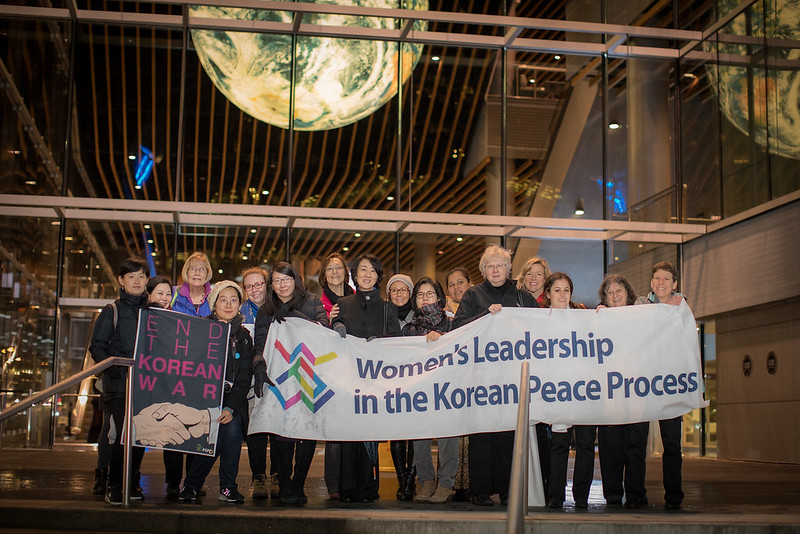 STATEMENT OF THE VANCOUVER WOMEN’S FORUM

ON PEACE AND SECURITY ON THE KOREAN PENINSULA

As sixteen delegates representing peace movements from all over the world, we have traveled from Asia, Pacific, Europe, and North America to convene the Vancouver Women’s Forum on Peace and Security on the Korean Peninsula, an event held in solidarity with Canada’s Feminist Foreign Policy to promote a peaceful resolution to the crisis on the Korean Peninsula. Sanctions and isolation have failed to curb North Korea’s nuclear weapons program and instead severely harm the North Korean civilian population. A Korean Peninsula free of nuclear weapons will only be achieved through genuine engagement, constructive dialogue, and mutual cooperation. We issue the following recommendations to the Foreign Ministers participating in the January 16 Summit on Security and Stability in the Korean Peninsula:

● Immediately engage all relevant parties in dialogue, without preconditions, to work toward achieving a nuclear-free Korean peninsula;

● Abandon support for the strategy of maximum pressure, lift sanctions which have deleterious effects on the North Korean people, work toward the normalization of diplomatic relations, remove barriers to citizen-to-citizen engagement, and strengthen humanitarian cooperation;

● Extend the spirit of the Olympic truce and affirm the resumption for inter-Korean dialogue by supporting:

ii) a pledge not to conduct a first strike, nuclear or conventional, and

iii) a process to replace the Armistice Agreement with a Korea Peace Agreement;

● Adhere to all the Security Council recommendations on Women, Peace, and Security. In particular, we urge you to implement United Nations Security Council Resolution 1325, which acknowledges that the meaningful participation of women in all stages of conflict resolution and peacebuilding strengthens peace and security for all.

These recommendations are based on our long experience engaging with North Koreans through citizen diplomacy and humanitarian initiatives, and from our collective expertise on militarism, nuclear disarmament, economic sanctions, and the human cost of the unresolved Korean War. The Summit is a sobering reminder that the gathered nations have a historic and moral responsibility to formally end the Korean War. A pledge not to conduct a first strike can de-escalate tensions by significantly reducing the apprehension of an attack and the risk of miscalculation that could result in an intentional or an inadvertent nuclear launch. Resolving the Korean War can be the single most effective action to halt the intense militarization of Northeast Asia, which gravely threatens the peace and security of 1.5 billion people in the region. The peaceful resolution of the Korean nuclear crisis is the key step toward the total global elimination of nuclear weapons.

Vancouver Women's Forum on Peace and Security on the Korean Peninsula

Mary-Wynne Ashford, International Physicians for the Prevention of Nuclear War