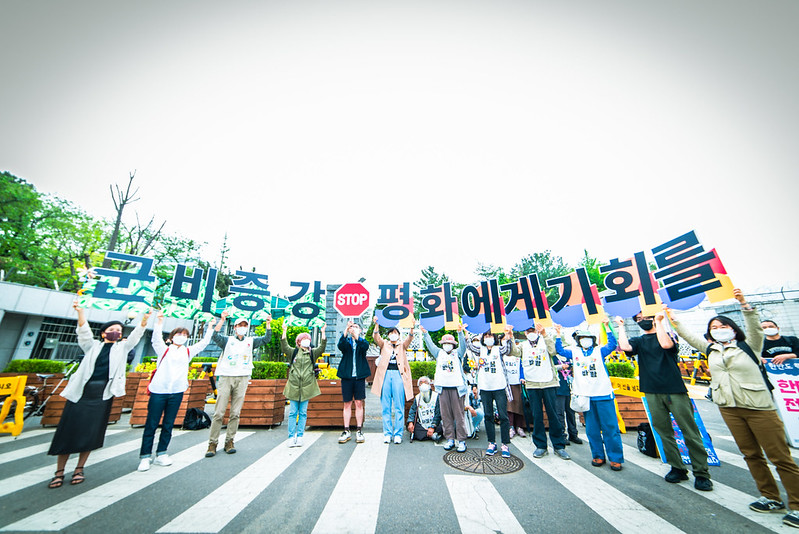 While the world is witnessing the war and militarism is gathering strength, we are here today to shout “let’s give peace a chance’ again, on the occasion of the Global Days of Action on MIlitary Spending. The war has been ongoing for eight weeks since Russia invaded Ukraine on 24 February. The peace negotiation has bogged down, also the distress by the war has worsened. According to the United Nations Human Rights Office of High Commissioner (OHCHR), the war has so far caused 5,381 civilian casualties, 470 of whom are children. About 5.2 million people have left Ukraine, fleeing from the war. Not only in Ukraine, but also countless people in the world have already suffered from wars and conflicts. We must stop any more tragedies. The power to bring a diplomatic and peaceful resolution is more important than ever. We urge governments around the world to reduce military spending and to create a peaceful and sustainable world, stressing that making peace by peaceful means is the most realistic and fastest way.

According to the Trends in World Military Expenditure 2021, the Stockholm International Peace Research Institute (SIPRI) released today, the world spent 2,113 billion dollars on military expenditure last year, an 0.7% increase year over year. South Korea’s military expenditure has ranked 10th in the world, it has maintained for 9 years from 2013. Military spending as a percentage of GDP is also 2.8%, one the highests among the top 10 countries.

European countries and the U.S. have officially increased the defense budget and introduced various weapons, with an excuse of Russia’s invasion of Ukraine, announcing an increase in military spending. The stock prices of defense companies are also rising day by day. However, we cannot prevent war or guarantee peace and security in this way. Rather, it will increase military tensions and the risk of war, accelerate the arms race, and will negatively affect the stability of the world and peace building.

It will work the same for the solution for peace on the Korean Peninsula. It is important to rebuild trust and resume dialogue, not to increase military spending. In 2018, South and North Korea agreed on ‘disarmament in a phased manner as military tension is alleviated and substantial progress is made in military confidence-building’, however, the South Korean government has continued to increase military spending since then. Military spending, which was about 40 trillion won in 2017, increased to about 55 trillion won in 2022, during Moon Jae-in’s administration. In Particular, the investment in military capability building-up to introduce weapons has increased significantly. South Korea’s continued armament enhancement has been one of the reasons for destroying military trust between the two Koreas and blocking progress in peace and denuclearization on the Korean Peninsula. While inter-Korean and DPRK.-U.S agreements were not properly implemented and dialogue and negotiations stopped, North Korea eventually pushed ahead with the ICBM test-firing. The situation on the Korean Peninsula verges on returning to the confrontation like it was before the Panmunjom Declaration. However, aggressive military strategies and armament enhancement plans of President-elect Yoon Seok-yeol is making the future even bleaker. These plans include the restoration of the Korean 3-axis system including securing preemptive strike capability such as kill chain, the deployment of the Korean THAAD system, the early deployment of the Korean Iron Dome, the introduction of AI-based unmanned and robot combat systems, and the reinforcement of ROK-U.S. Extended Deterrence. It is urgent to switch to a peaceful approach, not to repeat the failed methods of military pressure and sanctions. Many people acknowledge that South Korea’s military and economic power already has a much greater advantage over North Korea, and in 2021, South Korea spent 1.5 times the amount of North Korea’s gross domestic product (GDP) on defense. The strengthening of South Korea’s military capabilities will only deepen the security dilemma on the Korean Peninsula and will not stop North Korea from developing nuclear weapons and missiles. What we need for peace is not more military spending.

We should re-arrange our budget and resource use priorities for ‘human security’ and ‘peaceful coexistence’ rather than ‘military security’. Economic inequality intensified,and the climate crisis or disaster response was not sufficient, while spending limited resources on advanced weapons and military capability enhancement. It is widely known that there was difficulty in the process of extinguishing a large forest fire on the east coast last month because of the lack of manpower and helicopters for fighting fires. The UN Environment Programme (UNEP) said, in a report released in February, that large wildfires due to the climate crisis will continue to increase, and that a major reorganization of the forest fire budget is needed to respond to it. According to the <World Inequality Report 2022>,  the income and wealth inequality index of South Korea is significantly high.The reality that the social safety net is weak has been revealed by infectious disease disasters such as Covid-19.

Let’s use our resources to solve urgent problems which threaten our lives and daily lives, not to build up the military. We need to drastically cut our defense budget and use it as an expense to cope with the global climate crisis, disasters, and social inequality.

Let’s stop the arms race and make peace by peaceful means. Efforts should be made to implement the inter-Korean agreement, resume dialogue, and improve relations, not to strengthen military capabilities.

On the Global Days of Action on Military Spending, people from all over the world are shouting.

Stop arms race and give peace a chance!

Cool-jam, the shelter for irregular workers

In for Peace, Democracy and Human Rights Education

Institute for the Study of Ecclesia and Life

National Council of YMCAs of KOREA

People in the tent village in front of Jeju

The Network of Love and Respect

Translated by World Without War 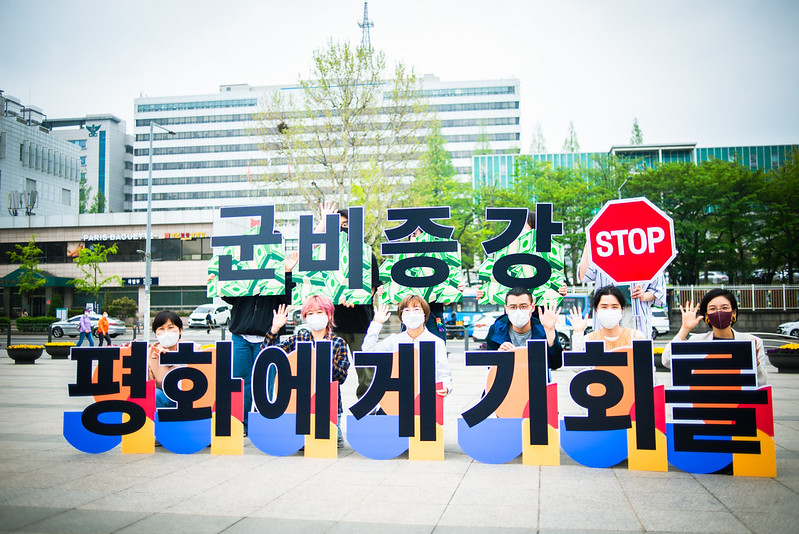 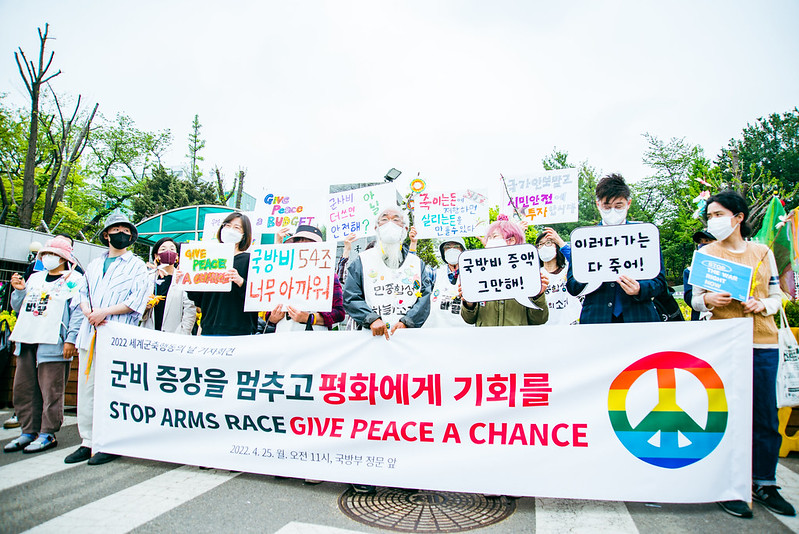 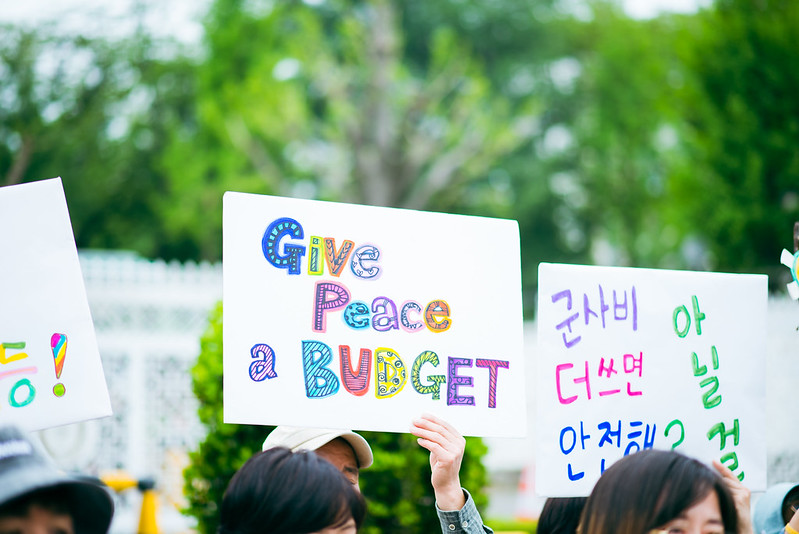 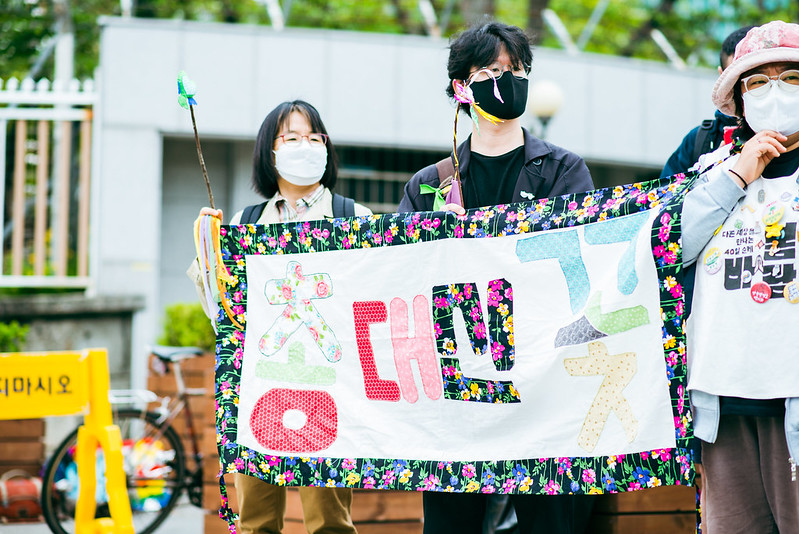 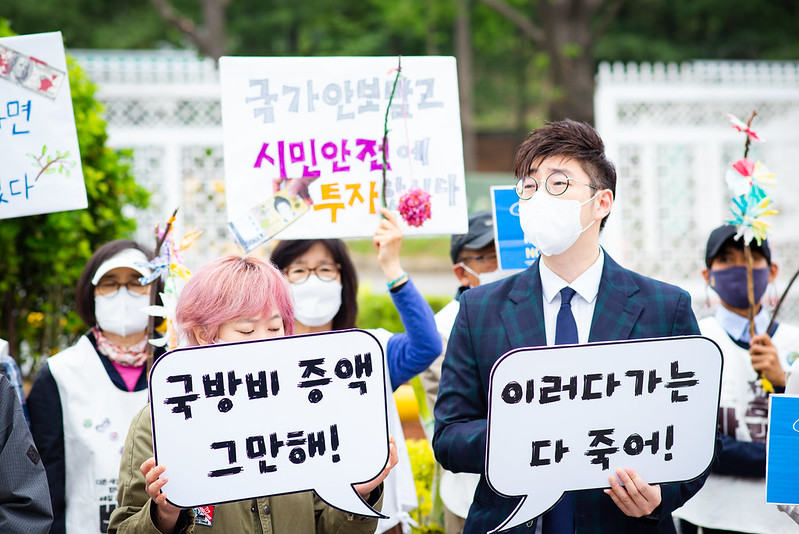