We urge the new government for peace 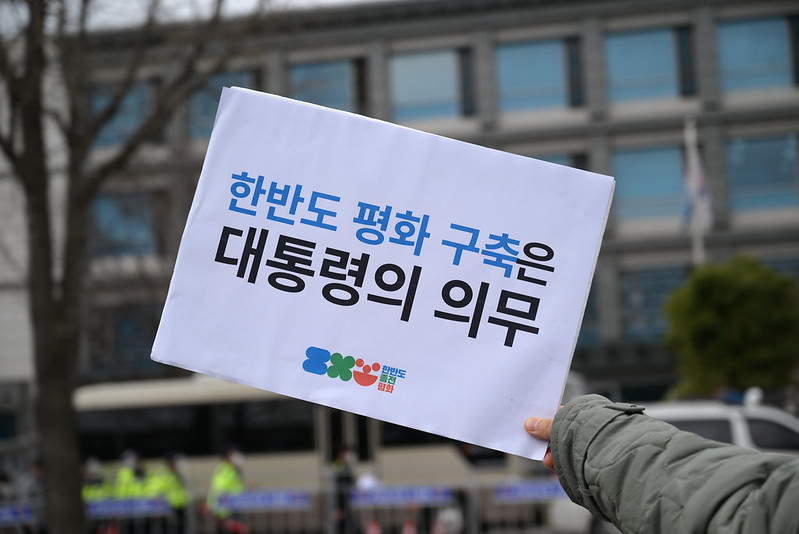 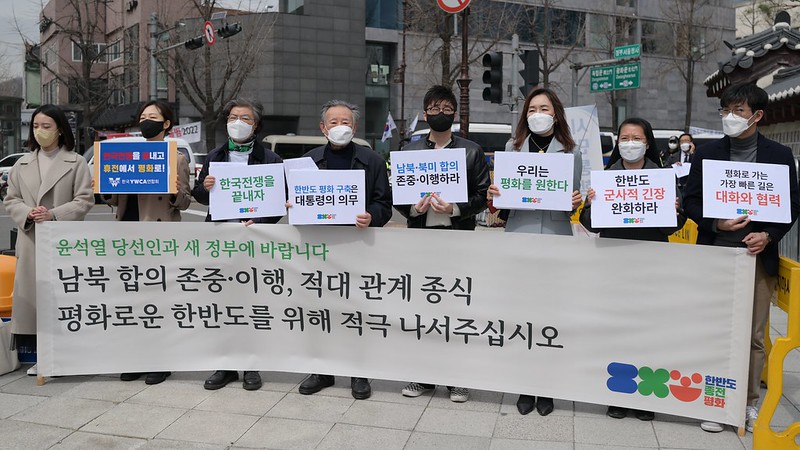 We urge the president-elect Yoon Suk-yeol and the new government to become actively involved in respecting and implementing inter-Korean agreements, to end hostile relations, and to create a peaceful Korean Peninsula

The presidential transition committee was launched on 18th March. We hope and expect the president-elect Yoon Suk-yeol and the new government will end the Korean War and bring peace on the Korean Peninsula.

While preparations for the inauguration of a new government are well underway, the political landscape surrounding the Korean Peninsula is impossible to predict. The peace process on the Korean Peninsula remains in deadlock, and the DPRK-US dialogues have been halted without reaching a common ground. Following the resumption of the ROK-US joint military exercises and additional US sanctions against the DPRK, the DPRK pushed ahead with the test-firing of ICBMs. Amid growing military tension on the Korean Peninsula, we, the Korea Peace Appeal Campaign, stand here today to express our desperate concern that under no circumstances should we revert back to those days of crisis before the Panmunjom Declaration.

During his presidential campaign, president-elect Yoon Suk-yeol, emphasized the importance of principles and mutual reciprocity and pledged to ‘sign a peace agreement only when denuclearization is achieved’ and to ‘maintain sanctions against the DPRK until denuclearization is ensured’. However, the previous approach relying on military pressure and sanctions have always failed, and the repetition of these unrealistic policies is unlikely to bring substantial progress towards peace on the Korean Peninsula. Denuclearization cannot be achieved if the ROK demands that the DPRK changes its attitude without taking its own steps to restore trust between the two Koreas and between the DPRK and the US, and any further delay will only increase the level of distrust and complicate the conflict.

The Korea Peace Appeal Campaign, which has been striving for an end to the Korean War, the establishment of a peace agreement, and the Korean Peninsula and a world free from nuclear weapons and nuclear threat, proposes the followings, which represents the opinions of civil societies and religious communities at home and abroad.

Firstly, the ROK-DPRK and DPRK-US agreements must be respected and implemented.

In 2018, the inter-Korean and DPRK-US summits reached an agreement that the general direction should be ‘establishing peace and denuclearization on the Korean Peninsula through improved relations and the building of trust’. After the inauguration of US President Biden in 2021, the leaders of the ROK and the US agreed that ‘diplomacy and dialogue based on previous inter-Korean and DPRK-US commitments such as the Panmunjom Declaration and the Singapore Joint Declaration, are essential’ in order to achieve the denuclearization of the Korean Peninsula and the establishment of permanent peace. The new government of the ROK also needs to begin at the very outset by announcing that it will respect and implement the existing agreements between the two Koreas and the DPRK-US. Based on this, it needs to make a comprehensive and phased approach to achieving the development of inter-Korean relations, denuclearization of the Korean Peninsula, and the conclusion of peace agreements. The door to dialogue is still open between the two Koreas, and the inter-Korean communication lines remain open. The easing of heightened military tensions is an urgent requirement. The new government needs to ensure that the agreements that have been negotiated up to this point are upheld and that further progress is made.

Secondly, an approach that prioritizes peace and cooperation over military buildup or sanctions should be chosen.

Since the economic and military asymmetry between the two Koreas has grown over the past generation, the ROK and the US need to make greater efforts to address the DPRK’s security concerns in order to make progress in the denuclearization of the Korean Peninsula. It should be noted that the increase in the ROK’s military expenditure in response to the DPRK threat could also heighten security concerns on the DPRK side. The ROK’s defense spending already amounts to 1.5 times the DPRK’s GDP, and it is a fact recognized by many that the US and the ROK holds a military advantage over the DPRK. Under the circumstances, if aggressive military strategies, such as the strengthening of the South Korean ‘three-axis’ defense system, emphasizing preemptive strikes, and the strengthening of the ROK-US extended deterrence, and policies to increase arms are pursued, this will intensify the perceived security dilemma and make the prospects for peace on the Korean Peninsula more remote. In addition, the situation in Ukraine may increase the DPRK’s security concerns, which means it would be necessary to provide security guarantees and actively propose ways to increase cooperation, rather than trying to subdue the DPRK by pressure of arms. President-elect Yoon Suk-yeol’s promise to provide humanitarian aid to the DPRK even before denuclearization is positive. We also expect additional policies, such as expanding exchange and cooperation and the easing of sanctions against the DPRK. We urge the new government to envisage a policy on the Korean Peninsula that prioritizes peace and cooperation rather than sanctions and pressure.

Thirdly, the new administration needs to pursue a balanced diplomacy for peace and a mutually beneficial diplomacy based on cooperation.

Conflict between the US and China is intensifying, and concerns about the possibility of a new Cold War are growing around the world. Both confrontations between the opposing camps and the arms race are intensifying at the expense of international and regional cooperation, and armed conflicts, such as Russia’s invasion of Ukraine, are also making matters worse. President-elect Yoon Suk-yeol, through his pledges, has been an advocate for the strengthening of the ROK-US alliance and of confrontational diplomacy strategies, including the rebuilding of the ROK-US combined defense posture, strengthening extended deterrence, and the joining of the Quad. However, bandwagoning the US-led military alliance is unlikely to have a positive effect on peace and denuclearization on the Korean Peninsula. It is also not desirable to strengthen the ROK-US-Japan military cooperation in response to the perceived threats from the DPRK and China. Such a strategy may bring about a new Cold War in which military tensions, confrontations between the opposing camps, and the abuse of power under the pretext of external threats, becomes the norm, rather than the establishment of democracy and peace on the Korean Peninsula and in East Asia. It will also make it difficult to address problems that require close cooperation between countries, such as the climate crisis. The ROK government needs to pursue peaceful cooperation and collective security in East Asia through a wise foreign policy. We hope the new government will comprehensively re-examine its commitment to strengthening the ROK-US alliance and demonstrate a vision of balanced diplomacy for peace and a mutually beneficial diplomacy based on cooperation.

Next year, 2023, will be the 70th anniversary of the signing of the armistice agreement. The people of the Korean Peninsula cannot enjoy lasting peace unless the prolonged and unstable armistice system, unprecedented in the world, is ended. Complete denuclearization will not be achieved unless the hostile relations between the parties to the Korean War, the ROK, DPRK, US and China, are resolved.

Resuming the stalled dialogue and ending the Korean war that has lasted more than 70 years is an arduous and difficult task. However, it is impossible to imagine a ‘new Korea’ without addressing this challenge. Building peace on the Korean Peninsula is the duty of all of us, and it must be pursued unwaveringly, regardless of which government is in power. Now, the role of the president-elect Yoon Suk-yeol and the new government is more important than ever. We sincerely hope that the new administration will do its best to bring about peace. The Korea Peace Appeal Campaign will also continue to work hard to achieve peace through people power. 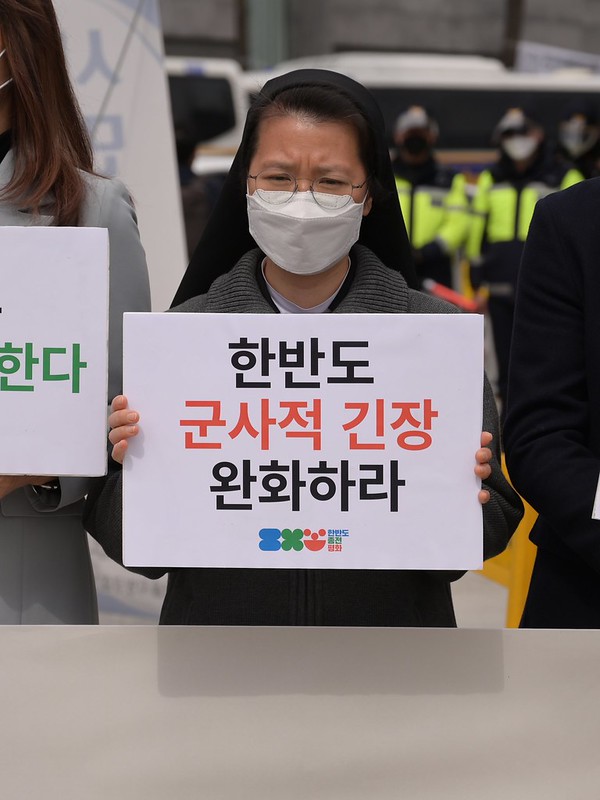 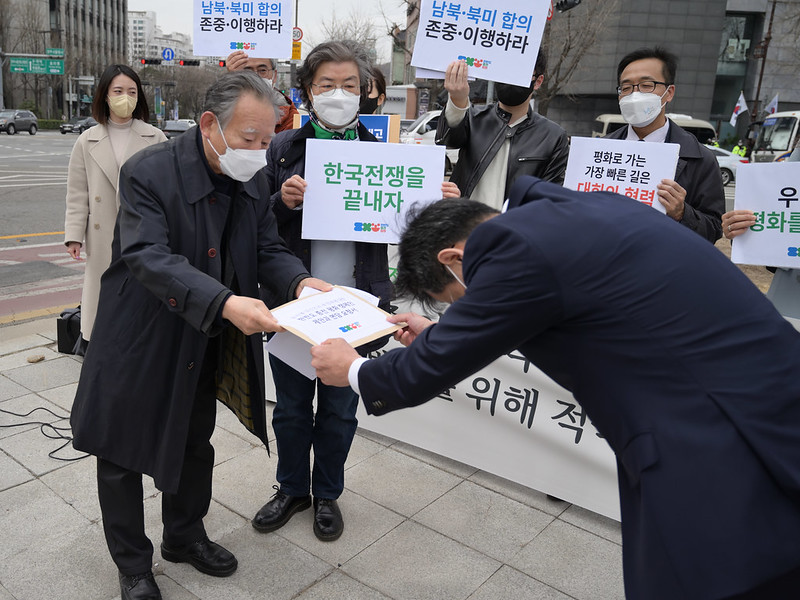