2021 GDAMS, Defund the Military, Defend People and the Planet! 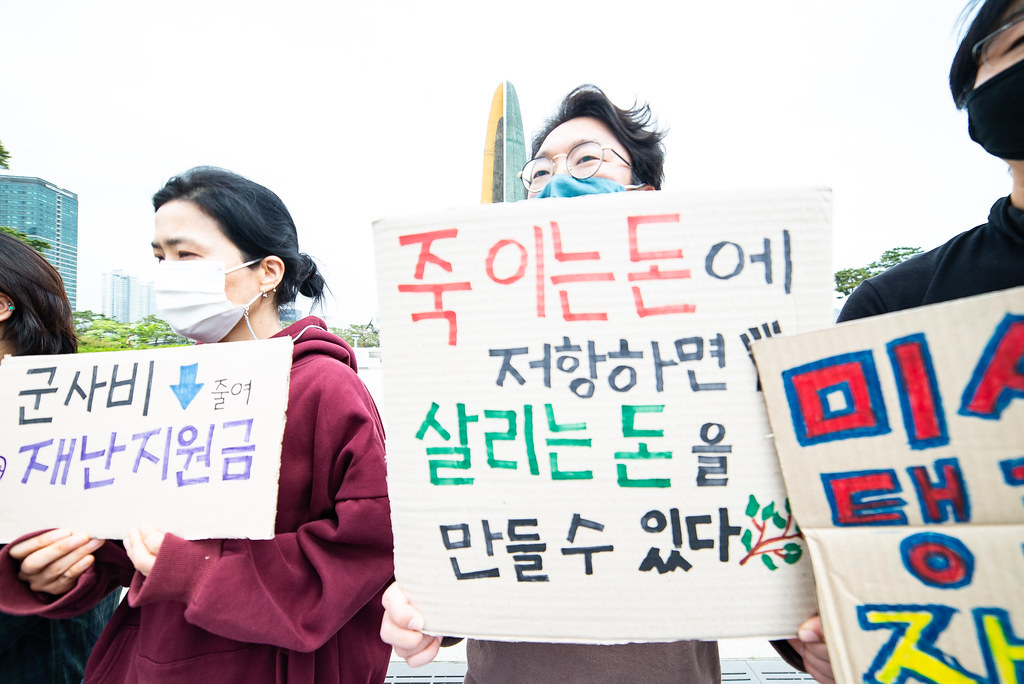 Defund the Military, Defend People and the Planet!

The world is in a struggle with the disaster due to the prolonged Covid-19. As of 25 April, about 140 million people have been confirmed as Covid-19 positives, and more than 3 millions have died all over the world. The disaster and economic downturn have been more harsh for the socially disadvantaged people. Due to the climate crisis, all life, including humans, is facing serious threats. Wildfires, heat waves, unusual rainy seasons, and droughts all over the world are saying there is no more time to wait.

However, despite the unprecedented crisis of Covid-19 and climate change, the military spending, which soars every year has not changed. According to the Trends in World Military Expenditure 2020, the Stockholm International Peace Research Institute (SIPRI) released today, the total amount of the military spending of the world rose to  $1981 billion last year, an increase of 2.6 percent from 2019. South Korea’s military expenditure has ranked tenth in the world, it has maintained for 8 years from 2013. Moon Jae-in’s government has increased 6.7% of national defense budget in annual average, and it reached 52.84 trillion won in 2021.

The whole world has spent astronomical amounts of military expenditures  for ‘national security’, however, they have failed to protect the safety of the people. While spending limited resources on advanced weapons and increasing the military capabilities, the opportunities to address more urgent issues such as Covid-19 and climate change reduced. The situation in South Korea is same. More than 50 trillion won was set as defense budget, but the budget to support those damaged by Covid-19 was only about 9 trillion won. Polarization and inequality are deepening due to the prolonged Covid-19, however, the budget to deal with the problems such as income reduction, employment crisis, and gaps in care and education is still very insufficient. It is time to reset our priorities and reframe the security paradigm, putting the policy and budget for the protection of the human and environment in the center.

We remember the spring of peace on the Korean Peninsula three years ago. In 2018, the leaders of South and North Korea agreed on ‘disarmament in a phased manner’ through the <Panmunjeom Declaration on Peace, Prosperity and Reunification of the Korean Peninsula>, and prepared the specific implementation plans for building military trust through the <Agreement on the Implementation of the Historic Panmunjeom Declaration in Military Domain>. Nevertheless, the South Korean government has continuously increased its military spending since then. It is also developing ballistic missiles that greatly increased its range and the weight of warheads, and introducing new weapon systems such as light aircraft carriers and nuclear-powered submarines. In addition, the government is considering the additional introduction of F-35A and F-35B, which are typical offensive weapons. The military build-up has made conversation difficult, and destroyed trust. South Korea’s military spending has long exceeded the total GDP of North Korea. No further increase is required. The unfinished war is the biggest cause of the arms race between South Korea and North Korea. If the South Korean government wants a progress of the peace process in Korean peninsula, an increase of defense spending must stop first, and need to act for the actual implementation of the inter-Korean agreement.  The implementation of ‘ disarmament in a phased manner’ agreement would be the most effective way to end the war and establish permanent peace on the Korean peninsula.

We request. . Let us use our resources to defend people and the planet, not to build up the military. Let’s cut defense spending dramatically, and use it for responding Covid-19 crisis, expanding the social safety net,  resolving inequality and sustainable environment.

Let’s stop the arms race and shift the policy in a way that makes peace by peaceful means. We have to make a lot of effort to implement ‘disarmament in a phased manner’ agreement which South Korea and North Korea have made together so hard.

People all around the world are calling for reducing military spending. Defund the Military, Defend People and the Planet! 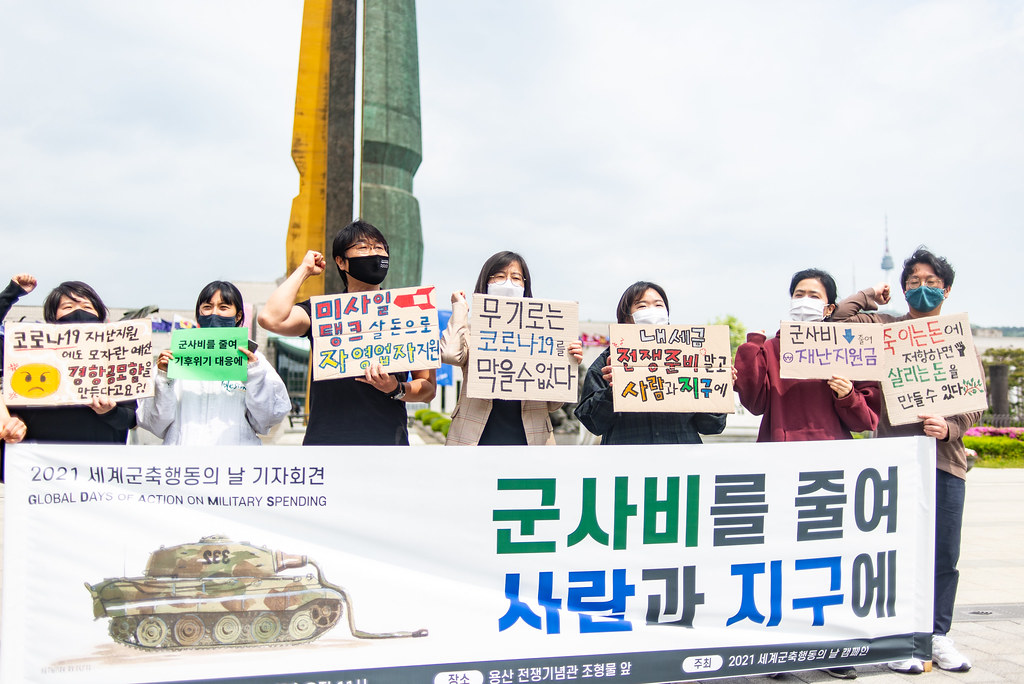