[Flyer] Let's end the state of Korean armistice, the longest unstable ceasefire in the world 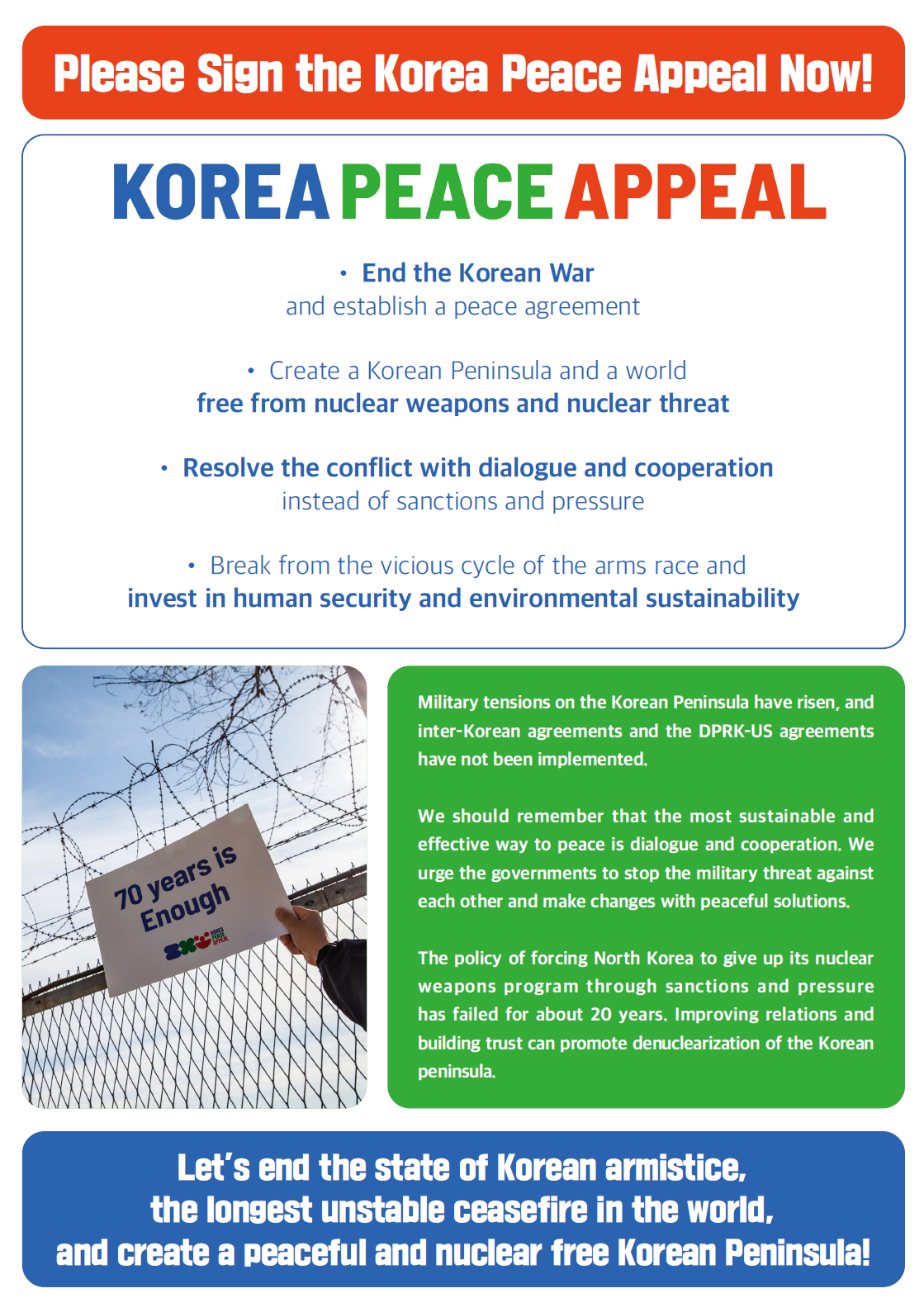 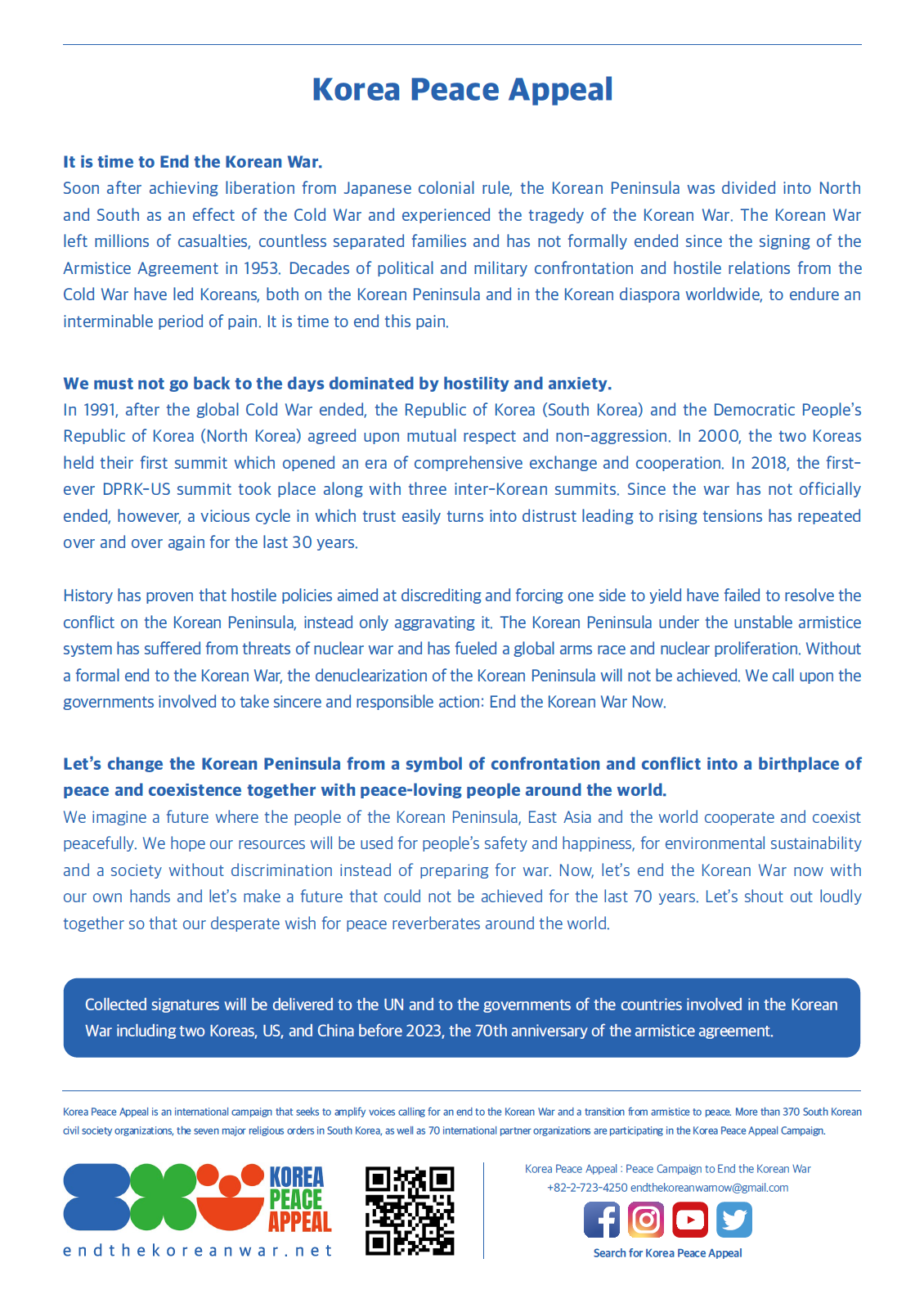 Let's end the state of Korean armistice, the longest unstable ceasefire in the world, and create a peaceful and nuclear free Korean Peninsula!

Military tensions on the Korean Peninsula have risen, and inter-Korean agreements and the DPRK-US agreements have not been implemented.

We should remember that the most sustainable and effective way to peace is dialogue and cooperation. We urge the governments to stop the military threat against each other and make changes with peaceful solutions.

The policy of forcing North Korea to give up its nuclear weapons program through sanctions and pressure has failed for about 20 years. Improving relations and building trust can promote denuclearization of the Korean peninsula.

It is time to End the Korean War.

Soon after achieving liberation from Japanese colonial rule, the Korean Peninsula was divided into North and South as an effect of the Cold War and experienced the tragedy of the Korean War. The Korean War left millions of casualties, countless separated families and has not formally ended since the signing of the Armistice Agreement in 1953. Decades of political and military confrontation and hostile relations from the Cold War have led Koreans, both on the Korean Peninsula and in the Korean diaspora worldwide, to endure an interminable period of pain. It is time to end this pain.

We must not go back to the days dominated by hostility and anxiety.

In 1991, after the global Cold War ended, the Republic of Korea (South Korea) and the Democratic People’s Republic of Korea (North Korea) agreed upon mutual respect and non-aggression. In 2000, the two Koreas held their first summit which opened an era of comprehensive exchange and cooperation. In 2018, the first-ever DPRK-US summit took place along with three inter-Korean summits. Since the war has not officially ended, however, a vicious cycle in which trust easily turns into distrust leading to rising tensions has repeated over and over again for the last 30 years.

History has proven that hostile policies aimed at discrediting and forcing one side to yield have failed to resolve the conflict on the Korean Peninsula, instead only aggravating it. The Korean Peninsula under the unstable armistice system has suffered from threats of nuclear war and has fueled a global arms race and nuclear proliferation. Without a formal end to the Korean War, the denuclearization of the Korean Peninsula will not be achieved. We call upon the governments involved to take sincere and responsible action: End the Korean War Now.

Let’s change the Korean Peninsula from a symbol of confrontation and conflict into a birthplace of peace and coexistence together with peace-loving people around the world.

We imagine a future where the people of the Korean Peninsula, East Asia and the world cooperate and coexist peacefully. We hope our resources will be used for people’s safety and happiness, for environmental sustainability and a society without discrimination instead of preparing for war. Now, let’s end the Korean War now with our own hands and let’s make a future that could not be achieved for the last 70 years. Let’s shout out loudly together so that our desperate wish for peace reverberates around the world.

Collected signatures will be delivered to the UN and to the governments of the countries involved in the Korean War including two Koreas, US, and China before 2023, the 70th anniversary of the armistice agreement.