1. Background
On 16 June 2016, offices and staffs of the Citizen’s Network for General Election of 2016 (Change 2016) were seized and searched by the police, for the alleged violation of Public Official Election Law. The investigated organisations include People’s Solidarity for Participatory Democracy (PSPD), an NGO with ECOSOC consultative status, and South Korean Civil Society Organizations Network, which consists of more than 500 South Korean NGOs. They were leading organisations of the Change 2016. Below is the list of police confiscation.

During the General Election of April 2016, more than 1,000 South Korean civil society organizations collectively established Change 2016 to conduct online blacklist campaigns and to encourage voters to participate in the election. Change 2016 conducted online campaign where voters could identify 10 worst candidates and choose 10 most urging pledges during election. Also, Change 2016 held a series of press conferences in front of the offices of the worst candidates selected by the voters. Below is the list of police confiscation. 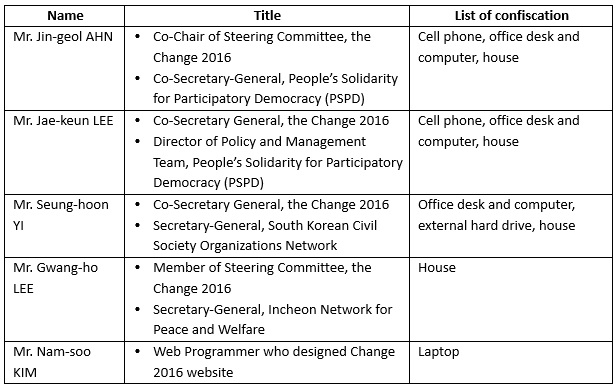 On 24 April 2016, Seoul Election Commission filed a complaint against Change 2016 for violating Article 93(1) and Article 108(1) of Public Official Election Law. The search and seizure of 16 June were conducted based on this complaint with search warrant. The latest attack on Change 2016 in the form of sudden police search and seizure is rather arbitrary and clearly has the ulterior political motive of threatening and repressing the works of the South Korean civil society. On 21 June 2016, the Commissioner General of Korean National Police Agency, Sin-myeong KANG, said as below at the press briefing: “Regarding allegations of violating Public Official Election Act, it is important to identify conspiracy and joint principal offenders, who actually initiated and instigated such an action. Therefore, we searched and seized relevant people’s house and offices as a minimum measure to find out abovementioned issues.”.

Public Official Election Act Article 93(1) Prohibition of Unlawful Distribution or Posting, etc. of Documents and Pictures
(1) No one shall distribute, post, scatter, play, or run an advertisement, letter of greeting, poster, photograph, document, drawing, printed matter, recording tape, video tape, or the like which contains the contents supporting, recommending or opposing a political party (including the preparatory committee for formation of a political party, and the platform and policy of a political party; hereafter the same shall apply in this Article) or candidate (including a person who intends to be a candidate; hereafter the same shall apply in this Article) or showing the name of the political party or candidate with the intention of influencing the election, not in accordance with the provisions of this Act, from 180 days before the election day (the time when the reason for holding the election becomes final, in case of a special election) to the election day: Provided, That the same shall not apply to acts falling under any of the following subparagraphs: <Amended by Act No. 5412, Nov. 14, 1997; Act No. 5537, Apr. 30, 1998; Act No. 6663, Mar. 7, 2002; Act No. 7189, Mar. 12, 2004; Act No. 7681, Aug. 4, 2005; Act No. 9974, Jan. 25, 2010>
1. Cases where any candidate or any person falling under any of the subparagraphs of Article 60-3 (2) (including the chief of an election campaign liaison office, in cases falling under subparagraph 2, and, in such cases, “preliminary candidates” shall be deemed “candidates”) personally hands out the name cards of a candidate under Article 60-3 (1) 2 during the election campaign period;
2. Ordinary political party activities under Article 37 (2) of the Political Parties Act during a period, other than the election period.

Public Official Election Act Article 108(1) (Prohibition, etc. of Publication of Public Opinion Poll)
(1) No one shall publish or report, by quoting, the details or results of a public opinion poll (including a mock voting or popularity poll; hereafter the same shall also apply in this Article) that makes it possible to predict the approval rating of each political party or the successful candidate in an election, during a period between six days before the election day and the closing time of balloting on the election day. <Amended by Act No. 5412, Nov. 14, 1997; Act No. 7681, Aug. 4, 2005>

4. Human Rights Violations
1) Freedom of Expression during Election Campaign Period
Although the Public Official Election Act in its present form severely inhibits voters’ freedom of expression, Change 2016 has been organizing its campaigns within the boundaries of the law in compliance with the opinion of the National Election Commission. Legal and polling experts have confirmed that the online campaign that Change 2016 conducted was not a public opinion poll. Moreover, Change 2016 never displayed the names and photographs of the candidates in front of their campaign offices. Although the present Public Official Election Act restrains voters’ freedom of expression, Change 2016 operated within the boundaries of the law. The latest attack on Change 2016 in the form of sudden police search and seizure is rather arbitrary and clearly has the ulterior political motive of threatening and repressing the works of the South Korean civil society.