How was your new year? PSPD has tried to be with citizens who hit the streets and squares in spite of cold. The first candle rally has started on 29 October last year and the Constitutional Court is going to make a decision near at hand. However, people want a perfect victory not noncommittal decision. Restoration of the democracy and enhancing people’s sovereignty are musts. Park Gen-hye, Choi Sun-sil, Lee Jae-yong and such powers must be punished and deep rooted dark era should be cleared. People are longing for new days in which democracy and ordinary people are alive to breathe.

Hence, PSPD has done its best to be together with citizens hit the streets and squares last January and February because we are the one who have to and will make new days for the people.

PSPD submitted a written opinion on the impeachment to the Constitutional Court. 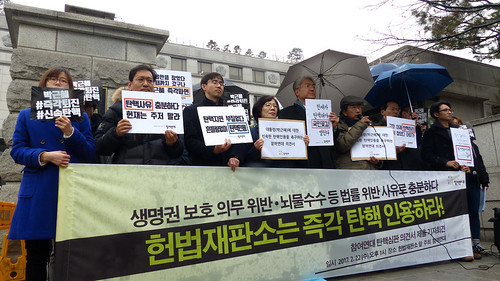 PSPD has submitted a written opinion to the Constitutional Court on 22 February urging to uphold impeaching the President Park swiftly. The first ground is the violation of duty to protect lives of the people and the safety. The president takes a responsibility and a liability as a head of crisis management to place all capacity to rescue people and direct every single situation but Park has failed to give specific orders and appropriate measures to settle emergency situation where 476 lives were at stake. In addition, she neither played a role as a control tower desperately needed nor move, control, direct to mobilize resources the government and private organizations have. There were little work done to judge the situation and prepare for appropriate measures based on collecting and analyzing data which are mandatory for handling large scale accidents.

Secondly, the president Park has accepted bribes from Samsung and made deals with Lee Jae-yong, vice chairman of Samsung Electronics. The written opinion argues that it is an abuse of power and privatizing the public authority given by the people and violation of constitutionalism. She has destroyed integrity of public officers and fairness in executing official duties. Furthermore, directly and indirectly involving in succession of Samsung group management and influencing its process and outcomes have damaged and threatened the economic order which is based on the order of market economy stated in the Constitution. PSPD also criticized the defense counsel of Park who tried to delay the decision on the impeachment trial and strongly demanded to finalize it to uphold before Lee Jeong-mi, a constitutional judge to retire.

Forum on problems and solutions for forced THAAD deployment
Seongju and Kimcheon of Kyungbuk province have kept protesting against THAAD deployment and many people worrying about South-North Korea relationship and peace in Asia have been carrying out Anti-THAAD movement without wavering. One of the main slogans shouted at candle rallies started on 29 October last year was ‘No THAAD deployment’. Nevertheless, the National Assembly and the politics arena haven’t responded disappointing the people care for the peace. Hence, PSPD has held a forum on 16 February to discuss problems and solutions for forced THAAD deployment in cooperation with ‘People’s action against THAAD deployment’. It reviewed whether approval of the National Assembly is required to deploy THAAD in terms of the Constitution and verified contents of the agreement between Korea and the US. It also checked if there has been any illegality in the process and discussed roles of the National Assembly facing the deployment pushed forward by the Park government.

Will stop insufficient legislation, punitive damage compensation system
The subcommittee for Bill Review under the National Policy Committee of the National Assembly agreed to adopt punitive damage compensation system for the Product Liability Act which imposes a manufacturer to compensate up to three times to the life, body or property of a person caused by a defect of a product. Unfortunately, three times compensation would not serve the purpose because punitive damage compensation does not provide sufficient compensation to victims of illegal acts and it is not strong enough to alarm and prevent similar wrongful conducts. Therefore, PSPD has requested to enact punitive compensation system on 21 August last year which does not set upper limit of compensation by law in order to prevent reoccurrences in case of damage to life and body by intention or serious faults.
According to government data as of 9 February 2017, 5,432 victims and 1.131 death caused by humidifier disinfectant have been reported. Despite of seriousness, the National Assembly has not prepared proper measures yet. The National Policy Committee of the National Assembly must stop adopting three times compensation instantly. Concerning anti-social, irresponsible and illegal conducts infringe life and body of a person by intention or serious faults such as Oxy disaster, PSPD urges the committee to re-consider it to adopt punitive compensation without set upper limit so that the purpose of the system can give effects.

that is, an investigation bureau for corruption of high ranked government officers required 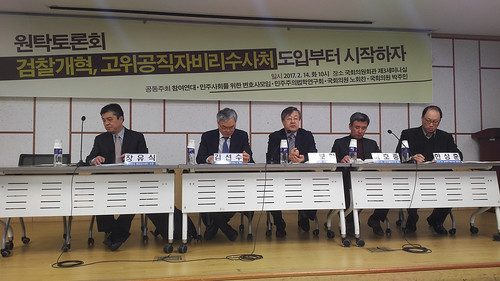 Park Young-su, a special prosecutor has received a warm support from the public because he is doing a great job as a special prosecutor. Arresting Kim Ki-choon, Cho Yoon-sun and Lee Jae-yong is something no one has ever done for the last several decades and ordinary prosecutors could never imagine to do so. What made this possible? The answer is ‘Special Prosecutors’ who are independent from current powers and the prosecutors. Then, how about establishing a permanent special prosecutor agency which would always watch, check and investigate the power, authority and high ranked officers closely?  That is, investigation bureau for corruption of high ranked government officers as you all know. Reforming Chaebol, prosecutors, the press and politics is what candle rallies think the most important and one of core tasks to achieve it is the establishment of an investigation bureau.

Demand to amend poisonous clauses of the National Election Law
Do you remember oppression against the General Election Net last year that offices of PSPD and the Civil Society Organizations Network in Korea, and residents of activists were seized and searched? 22 activists of the Net have been unfairly prosecuted by the Park government and their trial is underway. The second and third trial took place on 2 and 3 February and the fourth one will be held in March. Besides legal struggle to prove that fair movements of voters are innocent, PSPD is trying to change poisonous clauses of the National Election Law which provides a ground to prosecute the Net.

It has made card news pointing out problems that the Law is filled with ‘not allowed’, and carried out signature collecting and candle rallies demanding the amendment. Park Geun-yong, deputy secretary general and Cho Sung-dae, head of National Assembly Watch Center of PSPD have written columns in the press suggesting revision of the law which forces people to keep silence. A National Assembly discussion was held in respect to the reform on 15 February. Taking this opportunity, we could hope for removal of poisonous clauses which blocks the freedom of expression and the right to participation of voters. In addition, it would be good to lower down the legal voting age to 18 and older and adopt final voting and mixed-member proportional voting system. PSPD will move actively this year to reform the Election law.