People Power 2017, This month at PSPD

Through presidential election achieved by candle protest, ‘Moon Jae-in government’ has started its sailing. Many citizens are watching the news with joy because the new government is accomplishing its roles very well. Thus, PSPD receives questions what activities PSPD plans to carry out. They concern that PSPD’s role of social reform may shrink getting far from citizens.

PSPD will encourage the new government to execute social reforms candle citizen have hoped for. Needless to say, PSPD will demand the government to fill inadequacy and have productive debate. Whether election vows are kept or postponed after taking the power will be monitored and assessed. Arguments with opponents who hinder reforms that PSPD and candle citizens hope for will not be avoided. It will convince and criticize lawmakers who block legislation of reform bills. These are all what PSPD has been doing even during Kim Dae-jung and Noh Moo-hyun government and it will keep carrying out its duties sincerely and consistently.

Suggested seven tasks for eradication of deep-rooted evils and practices, and straightening up democracy 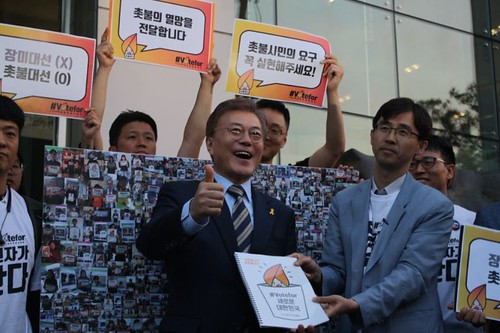 PSPD welcomes swift reform measures of president Moon Jae-in and new government. To take representative examples, Moon has ordered suspension of adopting state-authorized history textbook, to acknowledge two temporary contract teachers for line of duty death who died saving students when Sewol ferry sank and to investigate what Park Geun-hye administration and prosecutors have done in respect to a document ‘Jeong Yoon-heoi, actual power behind the throne’. He also has given directions to resolve job security issue of non-regular workers of Incheon International Airport, to close old coal power plants temporarily and to investigate problems associated with policy making process of four major river projects. PSPD supports these measures and at the same time, suggests seven tasks in order to eradicate deep-rooted practices and straighten up democracy.

△ Justice minister should be from non-prosecutor background △ Immediate commence of investigation on political maneuvering, violation and evasion of laws committed by Park Geun-hye and her administration △ It is required to investigate political intervention and fabricating public opinions conducted by National Intelligent Service during Lee Myung-bak and Park Geun-hye term △ THAAD deployment process must be stopped and reconsidered  △ Follow-up measures of agreement between Park Geun-hye and Abe government on ‘comfort women’ must be suspended and re-negotiation is required △ Investigate whole process of four major river and foreign resource development project forced by Lee Myung-bak government .

They are not easy to complete at once but expected to carry out one by one while administrative leadership and reform engine are strong during first 100 days after inauguration.

Proposed 14 social and economic reform measures
PSPD has proposed 14 social and economic assignments on 18 May which can be decided and executed by executive order of president as follow. △ Improve labor cost ceiling system, standard labor cost system and public organization management assessment in order to expand jobs in public sector △ Increase application for the insured’s share ceiling system of National Health Insurance Service for the purpose of lessening personal medical expense △ Abolish ‘Surplus childcare guideline’ which increases workload of childcare teachers △ Repeal core retrogressive revision of labor law <Fair human resource guideline> and <Guideline for Interpretation and management of employment regulations> (2016.01.22.) △ Withdraw notification of ‘Not a union’ for Korea Teachers and Education Workers Union △ Dispose administrative interpretation (68207-2855, 2000.9.19.) of the Labor Ministry that working on holidays are not included in overtime △ Exclude public officers who have involved in scandals such as Lone Star from appointment to economic ministry and public organizations △ Completely investigate allegations on connection among Fair Trade Commission, Korea Exchange and Samsung during Park Geun-hye government △ Pay allowance to young people who are unemployed or preparing for employment △ Establish a task force to secure housing rental for working class △ Reduce credit card commissions for small and self-employed business and prepare measure to protect store lessee △ Ease eligibility of national scholarship for tertiary education, raise the budget and set zero interest policy for student loans △ Drop down communication fee △ Instant shut down of screen horseracing in residential area of Yongsan in Seoul and Wolpyeong-dong in Daejeon, and stop expansion in Gyeonggi Kimpo.

Request to disclose criteria to screen candidates for high ranking public positions
There are favorable comments on designation of candidates for high ranking public positions made right after inauguration of Moon. It is great news in comparison with early term of Park Geun-hye government when designated candidates received huge criticism including prime minister because not only they failed to meet qualification but also had moral problems.

However, it is necessary to formally establish systematic environment to set criteria for screening candidates and prove verification process regardless of who becomes a president. All and each government of Noh Moo-hyun, Lee Myung-bak and Park Geun-hye is known to have criteria but details have never been disclosed. Therefore, PSPD sent a letter of opinion to the president Moon Jae-in on 23 May requesting to thoroughly prepare screening criteria and share process and results with the people and National Assembly.

On 22 May, PSPD recommended Kim Seon-su for Supreme Court Justice. He is a lawyer who has worked for rights of labor for a long time. Korea Bar Association also recommended Kim Seon-su to one of chief justice candidates on 15 May. We expect to hear that a lawyer who has actively advocated rights of socially disadvantaged people become a Supreme Court justice. Furthermore, we hope another new chief justice to be appointed in September satisfies expectation of citizens. 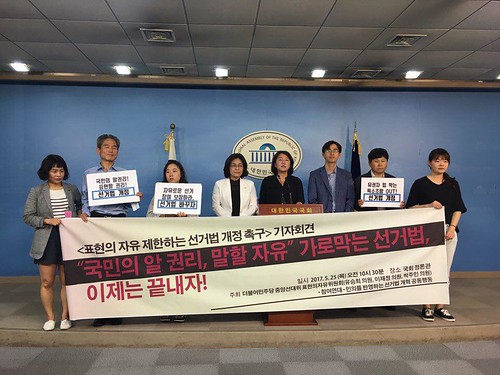 PSPD activists have been investigated and put on trial for the charge of holding a press conference with a picket in which a name of candidate is written while carrying out voter campaign for the 20th General election last April. It happens because harsh election law obstructs voter’s right of freedom to expression. National Assembly was urged to revise the National Election Law before the presidential election but it did not realized. Comes as no surprise, unjust law has made victims. On 25 May, PSPD held a press conference ‘Let’s put it an end, election law that blocks the freedom of people to speak’ in cooperation with lawmakers of the Minju party; Yoo seung-hee and Lee Jae-jeong, and presented victim cases occurred during the 19th Presidential Election period.

People were cracked down for the reason of including names and photos of candidates on poster ‘Peace leave, THAAD come?’, in parody leaflets comparing and reviewing candidate’s human rights policy on juveniles and flyers of experimental vote of the youth. In addition, the National Election Commission gave an excessive interpretation that writing a word of candle on banner even violated the law so that PSPD hang the same kind of banner in front of secretariat office to protest. To increase awareness of problems with the election law, story funding project <Why did they broke the law> was carried out from end of February to 15 May and a journalist Park Sang-gyu wrote seven articles. Many people have red and concurred with why election law has to change making contribution of 15,820,000 KRW in total. This fund will be used for campaign of revising the election law together with Park sang-gyu.