PSPD’s 23rd Anniversary reception was held on 14 September and more than 400 members and citizens have come to celebrate. Once more, it was the time to bear in mind what PSPD as a civil organization exists for. ‘What citizen’s dream will come true’ as the motto of the anniversary reception says, PSPD will work hard to make members and citizens dream for the better society and the more peaceful world. The first anniversary of the candle revolution is around the corner. PSPD will do the best for the candle revolution started with the first action of the people on 29 October last year in Cheonggye square to advance democracy and improve real daily life of ordinary people. We hope you have fruitful and great Chuseok holiday and autumn.


The facts of Beak Nam-ki, a deceased farmer case must be investigated this time 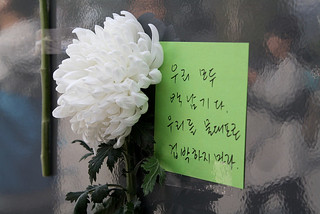 On behalf of the government, a Prime Minister Lee Nak-yeon made a formal apology on 19 September in respect to the case of Beak Nam-ki, a deceased farmer who was stroke and dead by water cannon shot by the police. Lee defined the case as abusing entrusted power given by the people and took a life and said to conduct complete investigation and ask legal responsibility. Furthermore, he promised to reform system and culture to prevent same kinds of unfortunate accidents. It seems late but what has to be done. PSPD released comments right after the apology and urged to find the truth, punish the responsible and improve the system to prevent further cases. No one should become a victim of government’s violence any more. 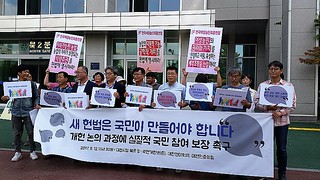 Allies with KBS and MBC union to straighten up public broadcasting 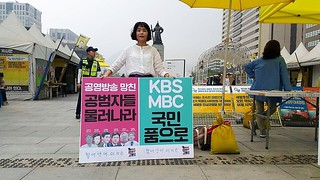 From midnight 4 September onwards, KBS and MBC unions have gone on strike urging to straighten up public broadcasting and overnight rally is being held every Friday. From hundreds to thousands of people participate in rallies shouting ‘MBC, KBS! Please come back’. PSPD also released a statement supporting actions of unions and is joining in Friday rallies. The strikes of two major broadcasters sparked empathy of the people that various fields of our society said to support and fight together demanding to return public broadcasting service back to normal which have been destroyed by Lee Myung-bak and Park Geun-hye administration. Civil Candle Revolution can be completed by rooting out corruptions and malpractices. Most of all, the press which have deceived and disguised the eyes and ears of the people must be cleaned off. Wish for the victory of ‘MBC, KBS! Please come back’ 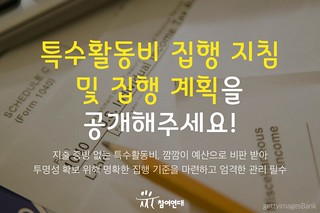 PSPD won another important lawsuit for public interest. Seoul Administrative Court ruled that “special activity expenses of the National Assembly needs to be disclosed in terms of satisfying people’s right to know and securing transparency and legitimacy of lawmakers’ activities. Rejecting an argument of secretariat office of the National Assembly that disclosing special activity expense account would harm important benefit of the state, the court pointed out there is no check and control over from budget allocation to execution that it needs to open the expenditure to the people in principle.

Hence, PSPD urges the secretariat office to accept the court’s decision and transparently disclose it. In relation to this, there is ‘Committee to promote giving up lawmakers’ privileges’ under speaker of National Assembly and PSPD also requested the speaker in October 2016 to prepare measures to decrease special activity costs and increase transparency of execution. The secretariat office should try to abolish special activity account or clearly open how it is spent if truly necessary to execute.

Condolence to Cho Young-sam, an advocate of peace who opposed THAAD and the war

On the other hand, it was the 400th day on 24 September since Kimcheon residents started candle rally against THAAD. PSPD activists and members also held a candle rally in Seoul on the same day. THAAD threatens the peace in Korean Peninsula and Northeast Asia and there is no benefit but harm. Hence, PSPD will continue fighting to withdraw THAAD deployment. Once more, we would like to pay condolence to Cho Young-sam who tried to be priming water for THAAD withdrawal and the peace.

A scandal frustrating the young Korean occurred again. The Board of Audit and Inspection announced the result of inspecting governance and human resource management of public organizations on 5 September and said more than 100 people have been unjustly hired to public organizations. Especially 493 out of 518 got a job at Gangwon Land by improper solicitation and the Hankyoreh Daily exposed it on 11 September. It has been found that secretaries of Kwon Seon-dong, a lawmaker of Liberty Korea Party have been recruited at Gangwon Land and Mine Reclamation Corporation and a suspicion rose for a niece of Lee Jeong-hyun, a former president of Saenuri Party for getting a job at Korea Aviation Industry by the backdoor.

While thousands of young people are having trouble in finding a job, young job seekers would deeply feel lost and deprived. Hence, Youth PSPD urged to investigate it strictly and punish people involved in requesting and accepting recruitment favor including Kwon Seon-dong and Lee Jeong-hyun, and reported them to the prosecutors jointly with Youth Union and other youth organizations on 25 September. The Youth PSPD has reported Choi Kyung-hwan, a lawmaker of Liberty Party Korea last year who illegally requested pubic corporation to hire his interns. Corrupted recruitment solicitation must be rooted out. 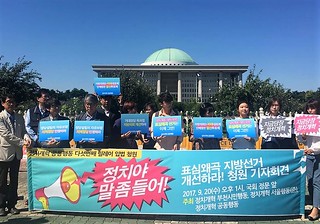 “Politic! Please listen to what people say!” <Joint Action for Political Reform> consisted of 422 labor, civil and social organizations nationwide presented three agenda and eleven tasks on 12 September and submitted a petition accordingly to the National Assembly Law. In the petition, the Joint Action argued that impeachment of a president proved that political system needs to improve fundamentally. Keys of representative democracy are election law and political party law associated with that election law that democracy cannot be realized without having the right system. In addition, it suggested three agenda including reforming the election law as people demand, diversity and increasing female participation and expanding the right to participate making everyone’s politic possible.

In terms of reforming the election law as people demand, it suggests followings △ Adopt mixed member proportional voting △ Increase number of seats of lawmakers without budget increase △Secure proportionality for local government council △ Adopt runoff for presidential and local governor elections. Regarding to diversity and expanding female participation, proposals are as below. △Mitigate political party establishment conditions and acknowledge local political party △strengthen female proportion system, △ Abolish numbering party, and lower down deposit of candidates and election costs conservation level. In respect to ‘Expand the right to vote to make everyone’s politic possible, followings are recommended △Secure the right to vote and eligibility for election to age 18 or older, and guarantee political activities of the youth, △Secure the right to expression of voters including abolition of Article 93 of the Election Law, △Guarantee basic political rights for teachers and public servants, △ Secure the right to vote including extending voting hours.