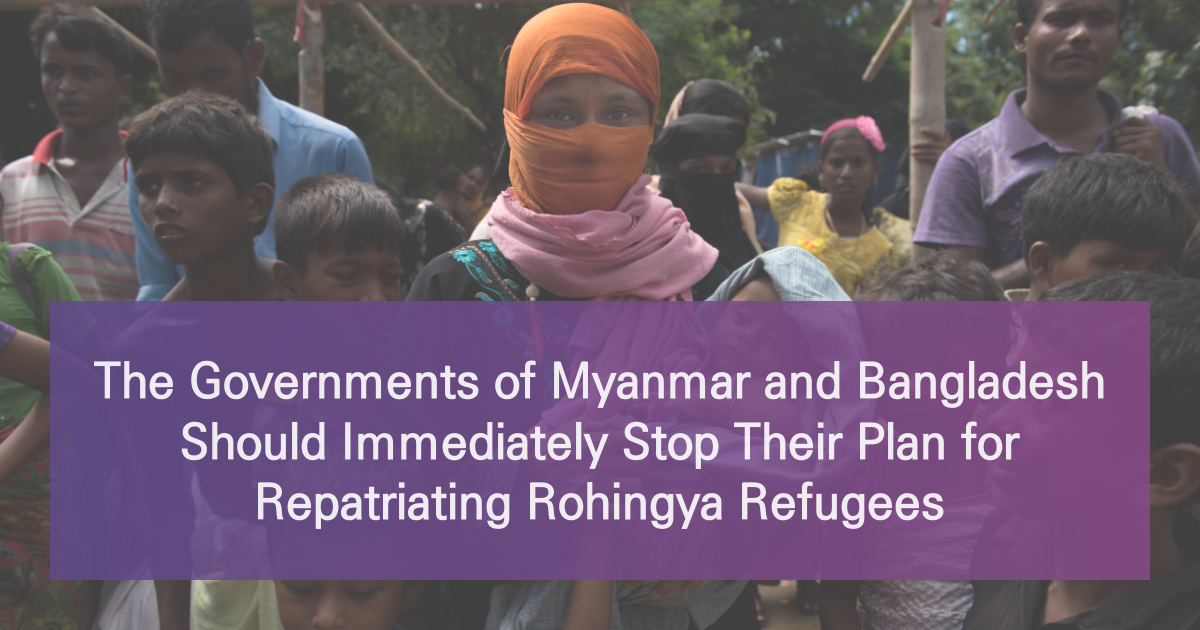 Myanmar and Bangladesh, after meetings in Dhaka, announced a bilateral agreement on October 30 to begin repatriating Rohingya refugees, who had fled to Bangladesh after persecution by Myanmar’s military, as early as mid-November. Korean Civil Society in solidarity with Rohingyas is deeply concerned about the safety of the refugees, and urges both the governments of Myanmar and Bangladesh to immediately stop their plan of forced repatriation. Any repatriation process should be safe, voluntary and dignified. Before repatriation, there need to be discussions about the prosecution of those responsible for the massacre, recognition of the Rohingya as an ethnic minority of Myanmar, and the granting of citizenship. The international community should first implement a mechanism that grants safety to the Rohingya before repatriation takes place.

According to news reports, the Myanmar government will repatriate the “first batch” of 2,260 refugees in November, out of a total of 4,000 verified refugees. The number of Rohingya in refugee camps in Bangladesh has reached nearly 900,000. They fled their home country, Myanmar, as a result of indiscriminate mass killing, rap, and arson by the Myanmar military. They lost their family members and friends in front of their eyes, and are faced with great difficulty in their daily lives.

The persecution of Rohingya has a long history. In Myanmar, a majority Buddhist nation, the Rohingya are referred to as “Bengali” and are treated as illegal residents. In 1978 and 1991, 200,000 and 250,000 Rohingya people respectively, were expelled to Bangladesh. Oppression of the Rohingya has been a systematic and institutionalized practice in Myanmar. The right to citizenship in Myanmar is denied to Rohingya, and their freedom of movement is extremely limited. For instance, in order to visit neighboring villages, they need to get permission from the public authority or pay a fee for traveling. Rohingya need the government’s permission before getting married, and due to birth control policies Rohingya women are often vulnerable to unsafe abortion practices. The government severely restricts educational opportunities for the Rohingya and they are not allowed to work in public offices. In the 2015 Myanmar general elections, the first free elections held in 25 year, Rohingya were denied the right to vote or run for election. In 2016, Myanmar’s military launched a crackdown in the country’s western provinces, in the name of fighting terrorism, which resulted in mass detentions, killings, torture, rape, arson and other crimes against civilians. In 2017, the military began “clearance operations” which saw ethnic cleansing leading to the deaths of thousands of people. The consistent persecution of Rohingya by the military for the past 40 years is simply incomprehensible.

Marzuki Darusman, chair of the UN Independent International Fact Finding Mission on Myanmar at the Security Council, described the persecution and killing of Rohingya as a “slow-burning genocide” as well as an “ongoing genocide”. Violence and killings are still taking place, with refugees continuing to cross the border into Bangladesh. There has been little change in the leadership of Myanmar’s military that carried out the ethnic cleansing against Rohingya. On November 4, in Sittwe, the capital of Myanmar’s western state of Rakhine, Buddhist protesters held a rally opposing the repatriation of Rohingya. They opposed Rohingya residence in the state and demanded the establishment of more Buddhist towns in the region. With this backdrop it is unthinkable to repatriate Rohingya at present. The Myanmar government plans to accommodate the repatriated Rohingya in temporary camps, but has not announced how long the refugees would have to stay. Critics of the repatriation express a common concern that the temporary camps would end up becoming de-facto detention center.

While the international community has been clear in calling the persecution and killing of Rohingya by Myanmar’s military a “war crime,” a “crime against humanity” and “genocide,” the civilian government of Myanmar, led by both the military and Aung San Suu Kyi, continue to deny their role, and are nonresponsive to requests to prosecute those responsible. To repatriate the Rohingya without any redress or commitment to improving safety, is to send them back to the site of genocide. This is a violation of the principle of non-refoulement, which bans the repatriation of people to a country where they will face persecution, torture, threat to life, or cruel and inhuman treatment. The governments of Myanmar and Bangladesh should abide by this international standard, and the international community needs to take action towards creating a mechanism for the protection of Rohingya.

Chris Melzer, the UNHCR’s senior external officer based in Bangladesh, openly voiced his concerns about the repatriation plan by stating that “the conditions in Rakhine state are not yet conducive for a return (of Rohingya) to Myanmar.” Charles Santiago, of ASEAN Parliamentarians for Human Rights, also pleaded that for the Rohingya, who live under an “apartheid-like system,” a plan that grants their safety and livelihood should be put in place first. It is apparent that any repatriated Rohingya would face a life in fear, haunted by the nightmare of mass killings. Repatriation, without deliberate consideration of the government’s systematic practice of discrimination, persecution and grave human rights violations, must be halted. Rohingya, who have faced unimaginable persecution, must be allowed to return only through a safe, dignified, and voluntary process. In addition, on their return Rohingya must be given the right to citizenship which they have been so long denied.

The Korean Civil Society in Solidarity with Rohingyas

Social and Labor Committee of Jogye order of Korean Buddhism