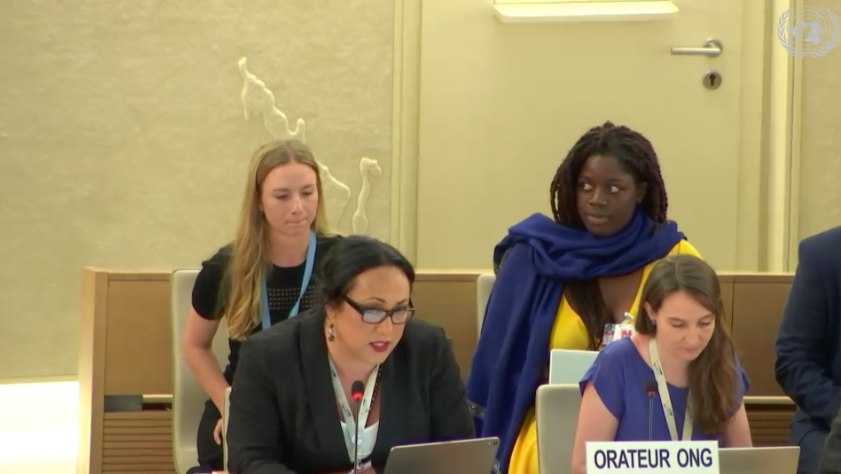 1312 NGOs working on diverse human rights issues, from 174 States and territories around the world call for the renewal of the mandate of the Independent Expert on violence and discrimination on the basis of sexual orientation and gender identity

I have the honour to deliver this statement that was endorsed by 1312 organisations working on diverse topics.

Around the world, millions of people face human rights violations and abuses because of their real or perceived sexual orientation or gender identity (SOGI). These abuses include: killings and extrajudicial executions; torture, rape and sexual violence; enforced disappearance; forced displacement; criminalization; arbitrary detentions; blackmail and extortion; police violence and harassment; bullying; stigmatization; hate speech; denial of one’s self defined gender identity; forced medical treatment, and/or forced sterilization; repression of the rights to freedom of expression, association and assembly, religion or belief; attacks and restrictions on human rights defenders; denial of services and hampered access to justice; discrimination in all spheres of life including in employment, healthcare, housing, education and cultural traditions; and other multiple and intersecting forms of violence and discrimination. These grave and widespread violations take place in conflict and non-conflict situations, are perpetrated by State and non-State actors (including the victims’ families and communities) and impact all spheres of life.

In 2016, this Human Rights Council took definitive action to systematically address these abuses, advance positive reforms and share best practices – through regular reporting, constructive dialogue and engagement – and created an Independent Expert on protection against violence and discrimination on the basis of sexual orientation and gender identity (SOGI).

This Council considered the mandate an essential tool to respond to the vast body of evidence of such violence and discrimination in all world regions and followed recommendations from the UN human rights system – including the Treaty Bodies, the Human Rights Council, its Special Procedures and the Universal Periodic Review (UPR), and the findings of the Office of the High Commissioner for Human Rights, and many others.

The two mandate holders have examined these issues in greater depth through reports, country visits, communications, and statements issued in the past three years. They have identified root causes and addressed violence and discrimination faced by specific groups, including lesbian, bisexual, trans and gender diverse persons.

The mandate has also welcomed progress and identified best practices from all regions of the world, including in decriminalisation, legal gender recognition, anti-discrimination laws and hate crime laws that include SOGI.

All the while, continuing to engage in constructive dialogue and assist States to implement and further comply with international human rights law, as well as collaborating with UN mechanisms, agencies, funds and programs and other bodies in international and regional systems.

For persons of diverse sexual orientations and gender identities globally, this mechanism and its work have been a beacon of hope that violence and discrimination will not be ignored; and since 2016, progress has been made in many areas in all regions, including in countries that have decriminalized consensual samesex sexual acts, legally recognized a person’s gender identity and promulgated SOGI-inclusive antidiscrimination and hate crimes laws.

A decision by Council Members to renew this mandate would send a clear message that violence and discrimination against people of diverse sexual orientations and gender identities cannot be tolerated. It would reaffirm that specific, sustained and systematic attention is needed to address these human rights violations and ensure that LGBT people can live a life of dignity.

We the 1312 NGOs from 174 States and territories around the world urge this Council to ensure we continue building a world where everyone can live free from violence and discrimination. To allow this important and unfinished work to continue we urge you to renew this mandate of the Independent Expert on violence and discrimination on the basis of sexual orientation and gender identity.

Out of the 1312 organisations that have signed this statement

The organisations come from 174 different UN member states and territories.