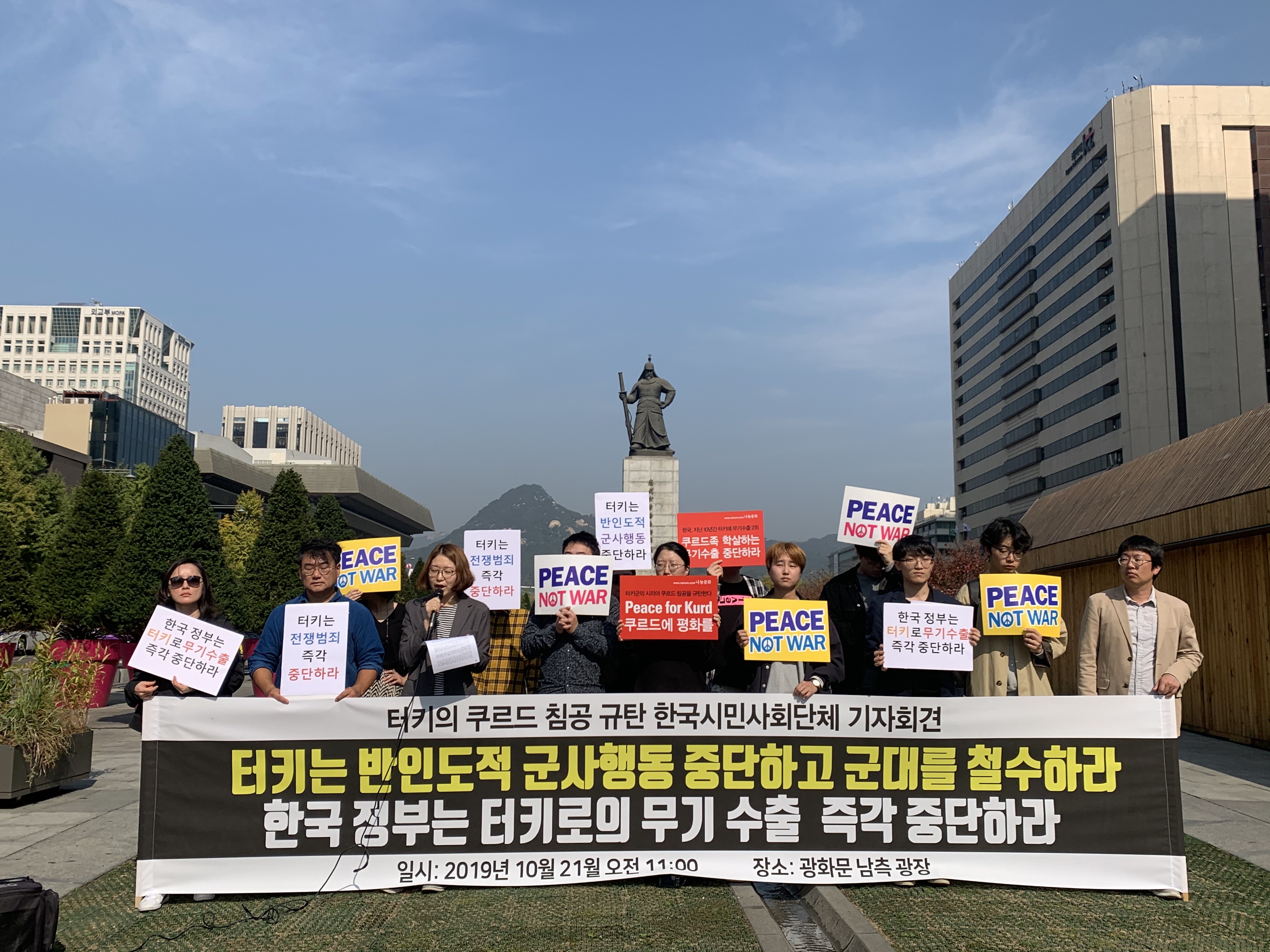 The Turkish government must stop its atrocious military operation against Kurds and withdraw its troops.

The Korean government should immediately stop exporting weapons to Turkey.

On Oct. 9, Turkish troops have commenced airstrikes and artillery barrages against the Kurdistan region of northeastern Syria. It all happened in just three days after a phone call between Donald Trump, the president of US, and the Turkish President Recep Tayyip Erdogan where he announced the withdrawal of American troops from Syria’s border, clearing the way for a Turkish invasion.

On Oct. 17, the 9th day of the invasion, the United States and the Turkish government announced an agreement to halt the invasion for 120 hours. There has since been temporary peace as Syrian Democratic Forces (SDF) agreed with the armistice. Despite the temporary cessation of human rights violation, the end of such unreasonable invasion is still unpredictable without the withdrawal of Turkish troops.

Miserable news has been conveyed during the continuous days since the invasion of Turkey. About 300,000 people became refugees and 592 people, including 120 civilians were killed according to the Syrian Observatory for Human Rights (SOHR).

The initial aim of the Turkish government was to protect their citizens from the Kurdish terrorists of PKK, who are listed as a ‘terrorist organization’. The government is willing to construct a ‘safe zone’ of 460 kilometers which invades Syria border of about 32 kilometers. This plan seeks to resolute the refugee problems by resettling maximum of 2 million people among 3.6 million Syrian refugees in the safe zone.

Nevertheless, stigmatizing the whole Kurdistan residents as a potential terrorist of PKK is an unreasonable suspicion. The fact that Democratic Union Party or PYD, the ally of Kurdistan Workers’ Party or PKK, is gaining political control over the region does not automatically make the whole residents terrorists.

Kurdish people rather have been playing a major role in rebuilding the security and administrations that had collapsed as the Syrian public officials abruptly left the city on Jan 19, 2012. They declared ‘Democratic Federal Administration’ supporting ecocentrism, racial and gender equality, and cooperative society. Moreover, as we all know, they were the ones who frustrated the plans of ISIS of constructing an imperial caliphate.

Turkish government is yet continuing the military attack, claiming that whole Kurdish residents are terrorists. This is a war crime which goes against the Geneva conventions on the Protection of Civilian Persons in Time of War. The government is committing a massive massacre against a specific race and ethnic, violating the national sovereignty and the peoples’ self-determination. Thus, we urge the Turkish government not only to cease the war for 120 hours but to permanently end the military attack and withdraw the troops.

Meanwhile, the Turkish Ministry of Defense has been uploading the photos of T-155 bombardment unleashing the plan Operation ‘Peace Spring’. This is a sub-brand product of K9 Self-propelled howitzer manufactured in Turkey using Korean technology and components. According to Stockholm International Peace Research Institute (SIPRI), Korea ranks the second among the countries who export arms to Turkey, following the United States. Turkish government has been a major customer of Korean arms industry, importing K9 Self-propelled howitzer, K2 Tank, KT-1 Trainer Aircraft, ammunition, and technology transformation.

Since the defense technological and industrial cooperation agreement in 1999, Korea and Turkey are operating defense technology & industrial cooperation committee. Korean Institute for Industrial Economics and Trade designated Turkey as one of the 10 rising markets for arms exports in 2018. Where have the Korean exported weapons been used? Irresponsible weapons exports can never be irrelevant to the pains of Kurdish people.

Finland, Norway, Netherlands, Sweden, France, Germany and England have all decided to halt arms exports to Turkey due to a military offensive against Kurdish forces in northern Syria launched by Turkey whereas the Korean government is keeping the silence. The Korea government must stop the arms export to Turkey and set proceedings to regulate behaviors that violate international law.

We call on Turkish government to withdraw troops from Kurdistan region, and the Korean government to cease arms exports. Violation should no longer go on.

Gender of the Square

MINBYUN Lawyers for a Democratic Society