[Statement] 2020 GDAMS, Reduce Military Spending to deal with the Climate Crisis and COVID-19 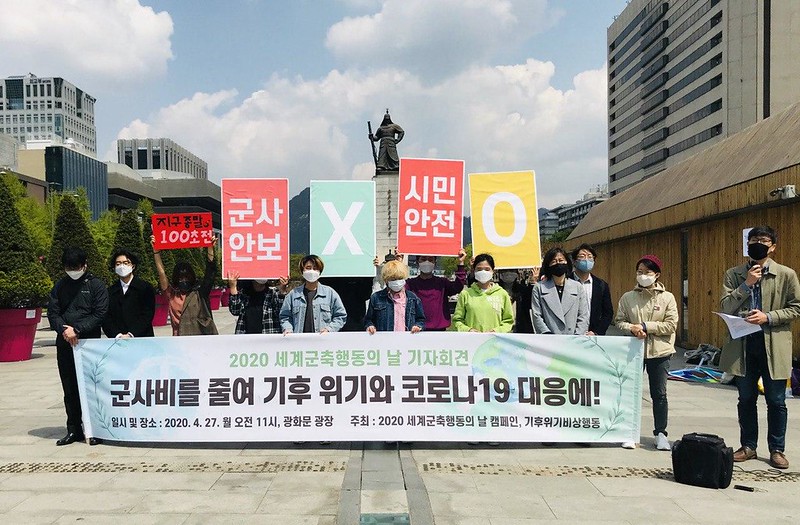 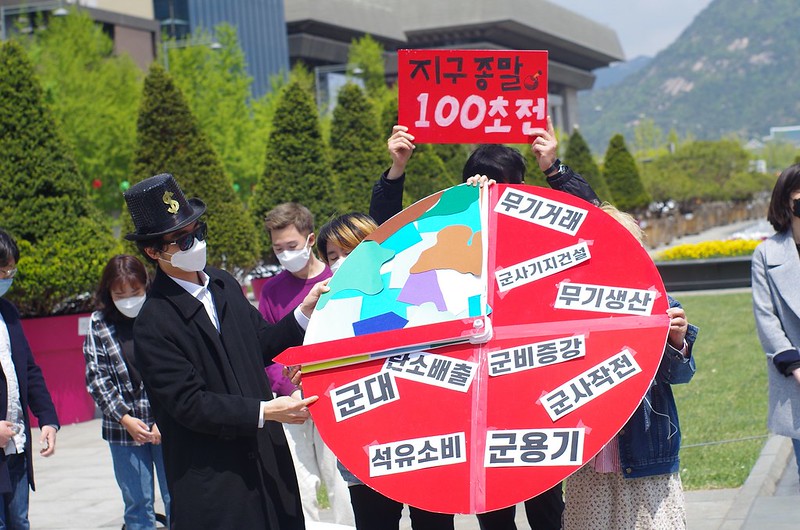 The whole world is in an emergency state due to the spread of COVID-19. As of April 26, the global toll of confirmed patients amounts to around 2.88 million, along with 200 thousand deaths. We are going through “the most challenging crisis since the Second World War”.

Today(April 27), we gather here for the Global Days of Action on Military Spending(GDAMS) 2020. We gravely face a shattered “security” for which astronomical military expenditures have been spent but were revealed to be helpless in the reality of a spread of a new virus, COVID-19.

According to the Trends in World Military Expenditure 2019 from the Stockholm International Peace Research(SIPRI) that was released today, Total global military expenditure rose to $1917 billion in 2019 with a 3.6 percent increase from 2018, which is 2.377 quadrillion in KRW. Military expenditure of South Korea is placed at the tenth, a fixed world status for seven years in a row since 2013. The national defense budget that has been rising at an average annual rate of 7.5% after the inauguration of the Moon administration reaches 50.1527 trillion KRW in 2020.

However, high-tech weapons and immense military spending could not solve the COVID-19 crisis, nor did they secure our lives. The global spread of COVID-19 pandemic is asking us what “security” for humans is. It warns us of our wrongly placed priorities in the meanwhile. To this day, our taxes have been primarily distributed on “national security”. A reckless arms buildup cost us chances to invest in policies for the livelihood of citizens and their safety. The fact that Korea’s military spending ranks the global tenth but the social welfare expenditure compared to GDP is placed at the bottom of OECD, exemplifies this. While Korea is evaluated as a model nation to deal with COVID-19 at the moment, the budget that is directly linked to the health and safety of citizens is greatly inadequate compared to the amount set aside for the military. It is appalling that the 2020 response budget for emerging infectious diseases was only 200 billion won and there was none allocated for public medical institution expansion. At this rate, there are rising concerns about chaos and damage that will be inevitable once the second wave of COVID-19 swoops down.

It is the time to reconstruct the national policy priorities to be “human security” instead of “military security”. Until recently, the government and the ruling party have been colliding upon who the grant subjects should be for the COVID-19 emergency crisis support funding. However, what is required here is a change in the way of thinking rather than mere finances. There would be enough funds once we confront the threats to life and coordinate the policy priorities accordingly. The curtailment of the budget for defense capability improvement that was planned to obtain the weapons system can be immediately reconsidered in a constructive manner. We are glad to note a recent government decision to redirect 900 billion KRW of the military budget to provide for the emergency crisis support fund. South Korea has become the first nation in the world to cut down its military spending to respond to COVID-19, adding on to its high reputation for COVID-19 disinfection, etc.

Be that as it may, this is not enough, for this was not an actual budget cut from weapons obtainment, but a reduction from the disused amount due to the drop in oil prices, the abroad testing cost for maritime operation helicopters that is expected to be cancelled, the already cancelled reserve force training cost, and the adoption cost of american weapons that has been postponed until next year. This is the background of the report Ministry of Defense has made, about how there won’t be any setbacks in adopting weapons from abroad because of the supplementary budget. Starting from this reduction, the cutback of military expenditures should be thoroughly scrutinized. There has been accumulated projects that must be closely examined of their validity and order of priority, such as the 6 trillion construction cost of the aggressive Korea Triad System(Kill Chain, KAMD, KMPR) which term was changed but the plan still in progress, 1 trillion of development cost for Korean Fighter program (KF-X) which plan has become uncertain due to the technology transfer rejection from the US and unpaid shared expenses of Indonesia, and the shared expenses for defense to host US armed forces in South Korea.

The COVID-19 pandemic warns us of the seriousness of climate crisis. While the exact reason for the proliferation is yet to be revealed, the experts point out a close relation between the emergence of new infectious disease and climate change. WHO has warned that infectious diseases will increase 4.7% corresponding to each 1℃ rise in the Earth’s average temperature, and <Comprehensive Report on Responses to COVID-19> presented last April 7 by the National Assembly Research Service also indicated that as there are more frequent contacts between humans and wild animals due to climate change and damages in the ecosystem, there are increasing cases in which the destruction of the environment leads to infectious diseases. We have vividly witnessed how the climate crisis can actually threaten our lives.

We request. Let us change the set priorities of “security”, and invest our resources to save people and the Earth rather than to prepare for war. The government should entirely convert all defense and diplomatic measures in the direction to establish peace in a peaceful manner instead of recklessly increasing military expenditures. Let’s utilize the drastic reduction of the military expenditures to alleviate social inequality, solve the climate crisis, and contribute to international cooperation for COVID-19 pandemic control and humanitarian aid.