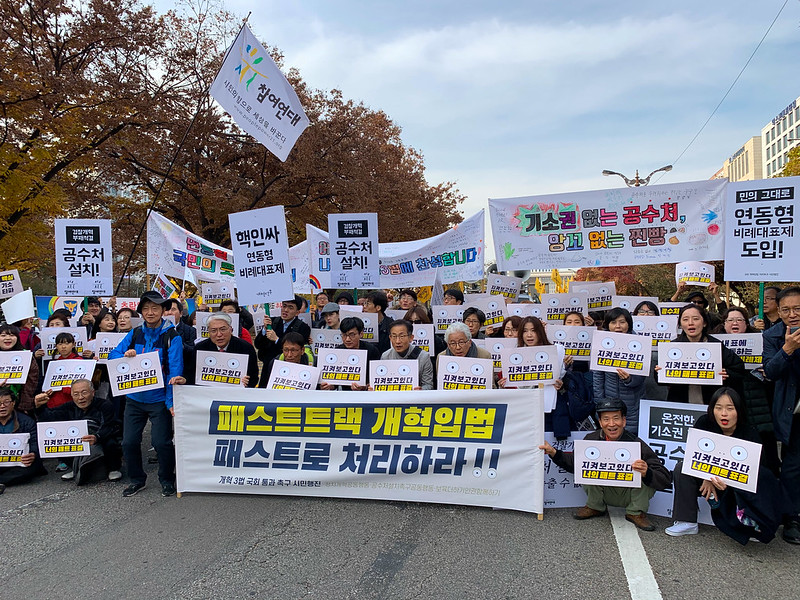 After 23 years of hard effort and frustration, in December of 2019, PSPD has finally passed the legislation for the establishment of the High-Ranking Officials’ Corruption Investigation Agency in order to create a checks and balances system for prosecutors and to discourage any corruption by the high-ranking officials. As there has been long-continued frustration due to the opposition of and interference with making this organization by the prosecutors, the Ministry of Justice, and former-prosecutor lawmakers, this is an outcome of citizens’ active participation to pressure the National Assembly for the establishment of the independent investigative agency and the reform of the prosecutor’s office.

In 1996, PSPD had first requested to establish an independent investigation agency to properly investigate cases on corruption by high-ranking officials and those with authority. Because it was urgent to solve problems related to corruption and the political-business coalition that were prevalent in our society, such as the incident on slush funds of two former presidents, Chun Doo-hwan and Roh Tae-woo, in 1995, the collapse of Seongsu Bridge followed by the collapse of Sampoong Department Store, and the IMF Crisis in 1997. Although the Anti-Corruption Law was enacted by securing the signatures from 253 out of 299 members of the 15th National Assembly, we had to continue to fight to create the High-Ranking Officials’ Corruption Investigation Agency. However, we were hindered by the opposition of the prosecution and the backlash from politicians. Meanwhile, citizens had to continue witnessing the abuse of prosecution’s authority, and public opinion started to raise their voices on the necessity of the independent investigative agency.