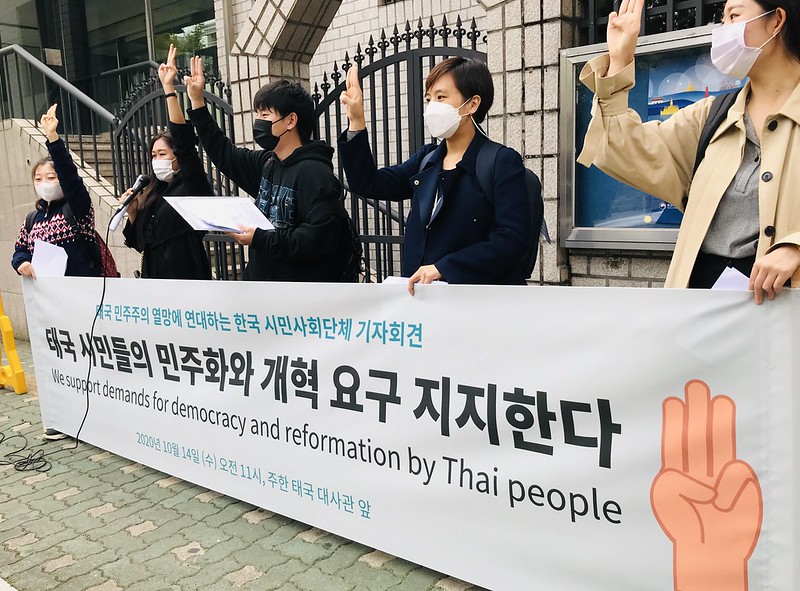 All state authority shall emanate from the people

We support demands for democracy and reform by Thai people

Tens of thousands of Thai people gathered at the Democracy Monument on September 19th. The demonstrators who are mainly led by teenagers and twenties have been protesting since the dissolution of the ‘Future Forward Party’). The reason why the citizens gathered in the square in spite of the risk of COVID-19 infection was rage against the current Thai ruling forces, who seized power under the unfair Constitution and disregarded people suffering from COVID-19 Pandemic.

The histories of Thai people’ democratic movements and their wishes longing for democratization of Thailand have been widely recognized by the world. However, Thai military forces turned away from citizens’ strong desire by continuous political interventions and frequent coups. Since the latest coup in 2014, democracy in Thailand has been even more deteriorated. It’s a great set back. The current ruling forces seizing power by the coup revised the Constitution in 2017 to guarantee the military’s intervention in politics and pave the way for Prime Minister Prayut Chan-o-cha to win again the general election in March 2019. Although it was the first election in 5 years after the coup, the leading forces) of the coup regained the power). They were busy seeking pretexts for dispersing the ‘Future Forward Party’, which has become the third party. Eventually, by utilizing the Constitutional Court which has made political judgements on the  side of the ruling elites, they dissolved the party. Any yet, this is not the end of the story.

Maha Vajiralongkoran, the Thai King, has long been infamous for his (super)-luxurious life spent mostly in Germany and also parts of Europe. This has been despite the fact that ordinary people’s lives in Thailand have faced extreme challenge and difficulties due to Covid19 Pandemic. Furthermore, the prosecutor in Thailand has dropped all charges against Vorayuth Yoovidhaya, the grandson of the Thai conglomerate ‘Red Bull’ founder. The case, where the grand son has fled abroad after killing a police officer in a hit-and-run incident in 2012, has become a source of nation-wide anger especially among the youth and also the ordinary citizens. While extremely tolerant towards the wealthy child and their crimes, the ruling class of Thailand by contrast has way more often use the criminal code 112 (or known as ‘lese majeste’) and the criminal code 116 (or “sedition”) against those who are critical on the authority. Furthermore, a Thai activist who fled to Cambodia to avoid militarists’ despotism was kidnapped by an unidentified assistant and has been in enforced disappearance in June. It is one of the cases that activists fleeing to abroad have been in enforced disappearances or were found dead.

Therefore, we would (firmly) state that growing anger and rage of Thai people towards the undemocratic, oppressive regime are totally legitimate one. Demonstrations utilizing social media also have become active around young Thai people. They demand not only restoration of democracy including constitutional amendment but also reform of monarchy, which demand in particular shock many because it’s unprecedented. And today, October 14th, And today, October 14, is the day of commemorating ‘the October 14 Uprising (Day of Great Sorrow)’ in 1973, which is the important pro-democracy movement in Thai history, Thai citizens are going to gather in the square again and hold protests on a large scale demanding resignation of Prime minister Prayut, constitutional amendment, and reformation of royal family.

Thai people’s uncompromising will for democracy has become an inspiration and hope throughout Asia. Korean civil society organizations are fully in support of Thai citizens’ longing for democracy and reformation and demonstrations. The reason why young people and citizens in Thailand are enraged and steps out into the streets was already experienced in Korea during the process of democratization and is tasks that Korea is now facing. The three fingers raised by Thai citizens symbolize the values of democracy and human rights which can never be abandoned even in COVID-19 Pandemic. It is the reason why the world pays attention to demonstrations of Thailand and Korean civil society supports them.

We also demand to Korean government. Thailand is a core country in the government’s ‘New Southern Policy’. Not only economics of country partnership but also democracy and human rights issues must be considered together in implementing ‘New Southern Policy’. President Moon Jae-in’s ‘New Southern policy’ that peace, people and prosperity(3P) were defined as core principles will become effective only when countries cooperate for the promotion of democracy and human rights as well as increase in culture and tourism exchange.

Finally, we demand to Thai government. From the end of 2016 to the spring of 2017, the message Korean citizens holding candles shouted was that “All state authority shall emanate from the people.” in the cold of midwinter. It should not be forgotten that the outcries of Korean citizens which meet outcries of Thai citizens, ‘Thailand is not the king’s.”, resulted in the impeachment of president and change of regime. Thai government should ensure the citizens’ freedom of expression, assembly and association and immediately stop suppressing protestors and opposition parties. Above all, the government should listen to desperate voices of citizens who gathered at the Democracy Monument despite difficult situations due to COVID-19 Pandemic. 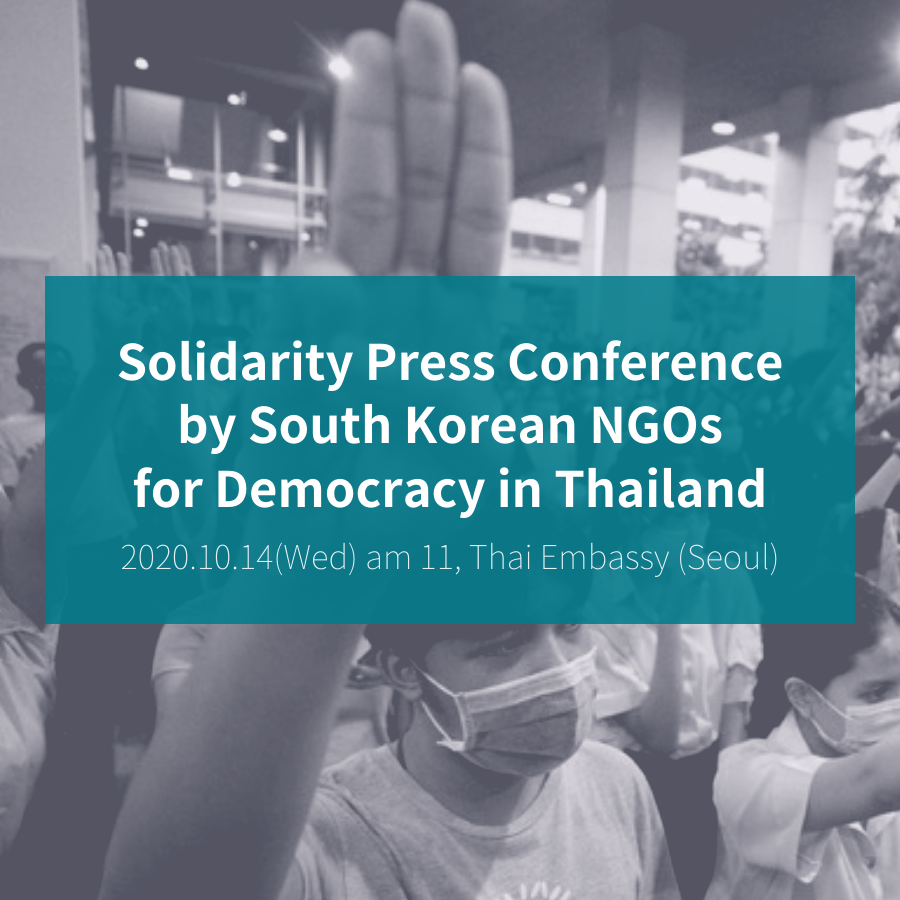