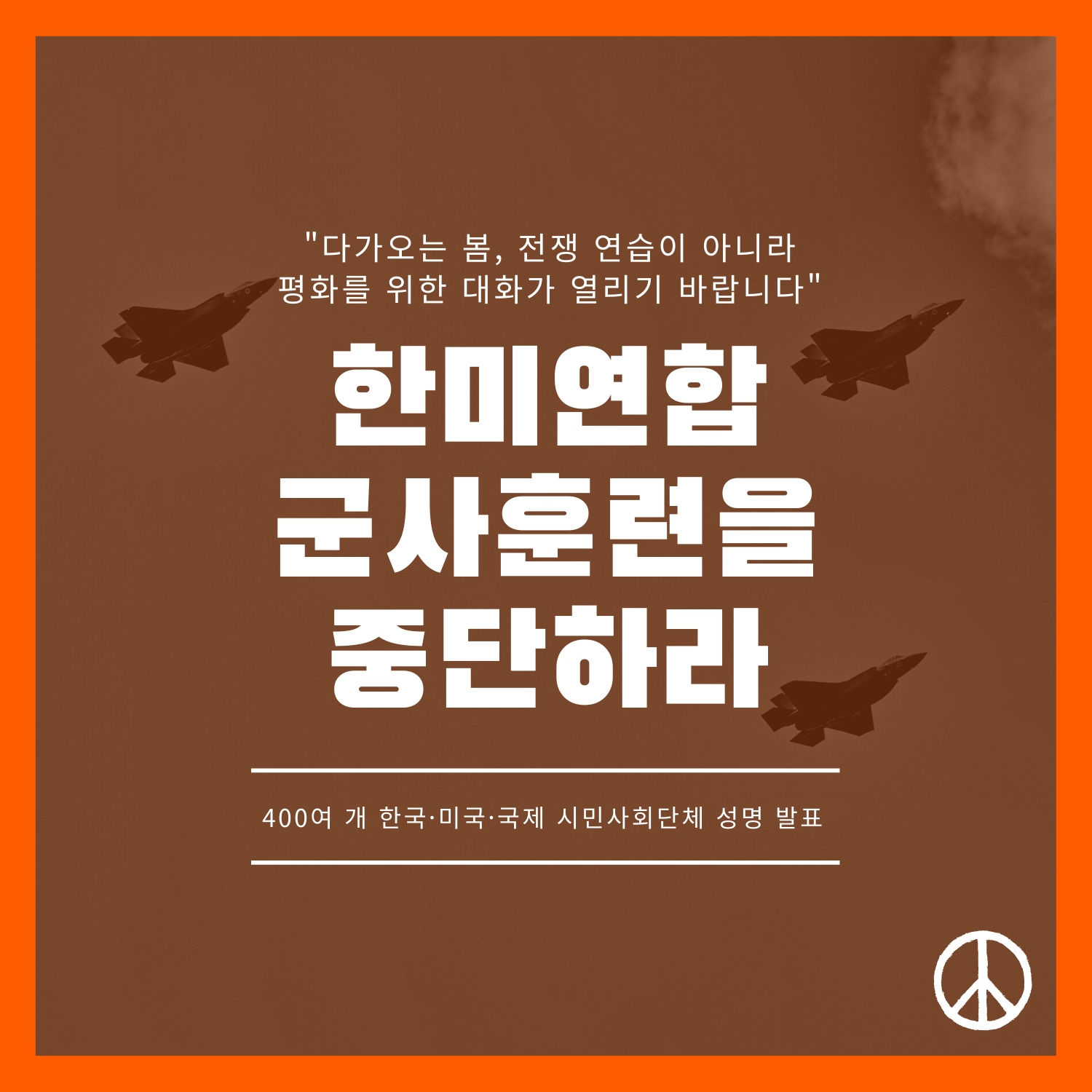 Call for the Suspension of US-ROK Combined Military Exercises

We, the undersigned civil society organizations in the United States, South Korea, and around the world, call on President Biden to suspend the annual US-South Korea (ROK) combined military exercises. Suspending these costly and highly provocative war exercises will be a crucial step toward re-starting genuine diplomacy with North Korea (DPRK). It will remove a formidable obstacle to a peaceful resolution of the ongoing 70-year-old Korean War and allow all parties to focus on other intractable global issues facing our nations today, such as creating a nuclear weapons-free world and resolving the current COVID-19 pandemic.

In the mid-1950s, just after the Korean War, the US and ROK began combined military exercises in South Korea that prepare for war with North Korea. In the 1970s the drills developed into large-scale exercises that mobilize considerable weapons, equipment and the deployment of US troops stationed in both South Korea as well as US bases outside the Korean Peninsula. Since the 2000s they have been based on operation plans that reportedly include pre-emptive strikes and “decapitation measures” against the North Korean leadership. Due to their scale and provocative nature, the annual US-ROK combined exercises have long been a trigger point for heightened military and political tensions on the Korean Peninsula.

For years these combined military exercises have involved the use of B-2 bombers (which are designed to drop nuclear bombs), nuclear-powered aircraft carriers and submarines, as well as the firing of long-range artillery and other weapons. They not only increased tensions on the Korean Peninsula, they have cost US taxpayers billions of dollars and have caused irreparable harm to local residents and the environment in South Korea.

At a time when the world is facing urgent humanitarian, environmental, and economic crises, these military exercises divert critically needed resources away from our capacity to provide true human security such as healthcare, a sustainable environment, and other priorities. Furthermore, they heighten geopolitical tensions and risk re-igniting a hot war on the Korean Peninsula, which would have catastrophic consequences for millions of people.

We want peace talks, not war drills and military confrontation. We urge the Biden Administration to resolve the root cause of the conflict between the United States and North Korea — the unresolved Korean War — which has driven a dangerous arms race, harmed the most vulnerable people through punishing sanctions, and enforced the tragic separation of hundreds of thousands of Korean families. Continuing to rely on isolation, pressure, and threats to force North Korea’s unilateral denuclearization is a recipe for failure.

Suspending the combined military exercises will be a major confidence-building measure toward renewing diplomacy to resolve the longstanding 70-year-old conflict with North Korea and, ultimately, achieve permanent peace and denuclearization of the Korean Peninsula.

Beyond War and Militarism

Coalition of Koreans in America

Columban Center for Advocacy and Outreach

Global Network Against Weapons and Nuclear Power in Space

Korean Americans for the Progressive Party of Korea

United for Peace and Justice

United Methodist Church General Board of Church and Society

US Campaign for Palestinian Rights

Women’s International League for Peace and Freedom US

경기장애인인권포럼 (The Human Right Forum of Person With Disabilities in Gyeonggi)

민족공동체추진본부 (Office for the Promotion of National Unity)

(사)겨레하나 (Movement For One Korea)

(사)광주전남겨레하나 (Movement For One Korea Gwangju and Jeonnam regional headquarters)

(사)인천겨레하나 (Incheon movement for one Korea)

전북청년겨레하나 (Jeonbuk Youth for One Korea)

통일민주협의회 (The Council Democracy for Unification)

통일의길 (The Happy March For One Korea)

한국기독교교회협의회 화해통일위원회 (Reconciliation and Reunification Committee, the National Council of Churches in Korea)

Cameroon for a World Beyond War

No Harbour For War, Canada

No to War – No to NATO Network

Youth for Nationalism and Democracy, Philippines