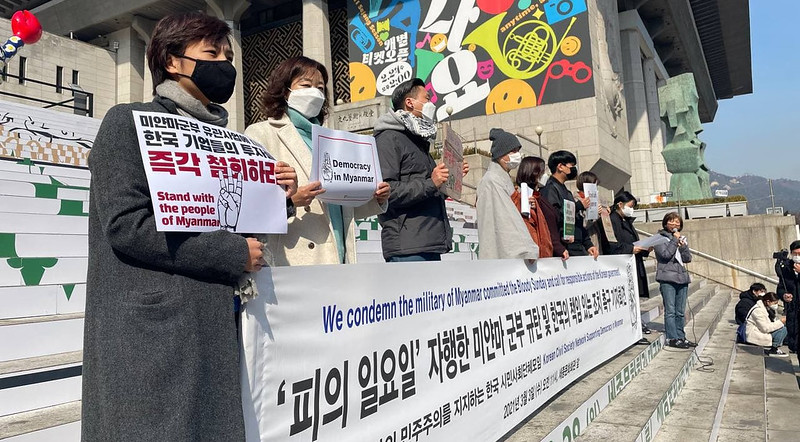 It was ‘bloody Sunday.’ In anti-coup demonstrations, the military of Myanmar is massacring citizens with bullets. According to the Office of the High Commissioner for Human Rights (OHCHR) and the Assistance Association for Political Prisoners (Burma), at least 18 people were killed, 30 injured, and about 1,000 arrested by Myanmar’s military and police on the 28 of February. According to local news in Myanmar, the number of deaths is likely to increase. The military and police have taken widespread measures to search for, arrest and detain citizens and activists who have led the protests and the people who have reported the protests on Social Network Services (SNS). Even reporters are being arrested, including foreign journalists. Some factories are firing workers who participated in the demonstrations and delivering personal information of union activists to the military. The military has stepped up its crackdown, massively arresting workers leading the protests, including a general strike.

Korean Civil Society Network Supporting Democracy in Myanmar firmly supports all Myanmar citizens fighting for democracy and human rights. We are enraged by the brutal Myanmar military, which does not hesitate to fire live ammunition at citizens.

On the 26 of February, the South Korean National Assembly passed a resolution – “Condemning the Myanmar military coup and calling for the recovery of democracy and the release of detainees.” The Resolution condemns, “the Myanmar military has again defeated the desire for democracy by force at a critical time, threatening the lives of the people, and trampling on the fruits of democracy that will be in full bloom after 50 years of adversity.”

The National Assembly resolution is significant as a confirmation of the legitimacy of the rise of citizens by clearly refuting the military’s justification of the coup over the ‘flawed election’ and its crackdown on pro-democracy figures and citizens. Furthermore, this Resolution means that the military, which suppresses the legitimate resistance of citizens by force and slaughters citizens who participated in the demonstration, must apology to the citizens and be judged and punished by citizens.

For the Resolution to be effective, immediate follow-up actions of the South Korean government are strongly required. It is imperative to clearly recognize that the business activities with Myanmar’s military and military-related companies have strengthened the military’s economic foundation, thus trampling on democracy and human rights today. The South Korean government must take every possible measure to identify the situation of South Korean companies that have been engaged in such business activities and to terminate their business relationships with the military and related companies. Furthermore, the South Korean government must devise all the necessary institutional arrangements to prevent Korean companies from infringing democracy and human rights in accordance with international standards.

If the South Korean government connives at the connection between the Korean companies and Myanmar’s military killing civilians, the government is to confess the New Southern Policy (Sinnambang) towards Southeast Asia, including Myanmar, which embraces “People, Prosperity, and Peace” as its core principles, is nothing but vanity. Also, the government’s acquiescence is a betrayal of the earnest desire of Myanmar citizens who are asking for solidarity, remembering South Korea’s history of democratization. The citizens of Asia are watching South Korea. Instead of declaring human rights and democracy only in words, South Korea must play a substantial role.

The international community have already endorsed international laws for the values of life, safety, human rights, and democracy that all humankind should be universally guaranteed, and for the obligations of governments to cooperate to ensure those values. Massacre and atrocities committed against citizens can never be considered as a matter of national sovereignty. Myanmar’s military has crossed the line – their atrocious acts can never be justified on the grounds of interference in internal affairs.

As citizens of South Korea who have long fought for democracy with blood, and members of the international community who have felt the importance of cross-border solidarity at a harsh time, we will unite with Myanmar citizens’ legitimate struggle and urge all political parties and political leaders in South Korea to discuss this matter seriously and come up with countermeasures shortly.

7. Association for the bereaved families 4.3 victims

32. Committee on Freedom of Expression and Press Repression

33. Commmitte of Justice, Peace, and Ecology of the Catholic Conference of Men Religious

48. Fellowship with the sufferers

74. Greenview incheon segu get together

93. Human Rights Center of the National Council of Churches in Korea

101. Institute for Law and Human Rights in Society

113. Joomin Church of the Presbyterian Church in the Republic of Korea

151. Memorial Committee for the Jeju April 3rd Uprising and Massacre

164. National Council of YMCAs of Korea

165. National Parents’ Association for the Realization of Equal Education

169. Nowon Community to create a village where we live together

212. SHARPs (Supporters for the Health And Rights of People in the Semiconductor industry)

217. Solidarity for Another World

220. Solidarity of Labor and right to the city(nodong-dosi-yeondae)

230. The Human Rights Forum of Persons With Disabilities in Gyeonggi

232. The Korea Center for City and Environment Research (KOCER)

233. The Korean Council for Justice and Remembrance for the Issues of Military Sexual Slavery by Japan (Korean Council)

235. The Lay Buddhist Association for Righteousness

237. The Presbyterian Church in the Repubric of Korea, Yeshim church

238. The Social Apostolate Committee, Korea Province of the Society of Jesus