Restriction without compensation, restriction on business operating hours as a measure against COVID-19 goes to the Constitutional Court

Associations of small merchants and civil society groups filed a constitutional petition twice on January 5th and February 4th, demanding compensation for loss from the opening restriction measures to prevent the spread of COVID-19 and supporting measures for the targeted small business owners. The central and local governments took actions to restrict openings (prohibition or restriction on gathering) of nine types of priority control facilities including bars and clubs, indoor sports facilities, cafes, and restaurants, over three times in March, August, and November of 2020. However, there is no provision of evidence on the compensation on the grounds of the measures in question, Infectious Disease Control and Prevention Act and the Public Notice on Local Governments. This is an invasion of the property rights and other rights of the targeted business owners. While unprecedented measures are necessary to prevent the spread of COVID-19, the loss and damage from the preventive measures should not be passed on the individual small business owners. 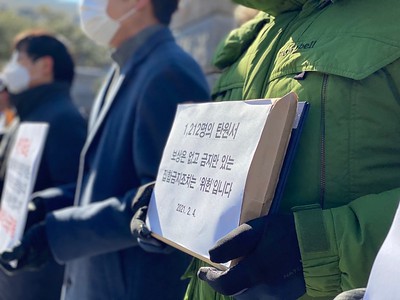 Impeachment motion against judge Lim Seong-geun, the beginning of setting the ‘independence of judges and the trials’ straight

The first approval of the impeachment motion on a judge in our constitutional history is now recorded. On February 4th, the National Assembly passed a motion to impeach Lim Seong-geun, currently a senior judge at the Busan High Court. By the persistent works of the civil society, including PSPD, the impeachment motion was proposed and passed by 161 votes against Judge Lim right before his tenure ended.

Judge Lim was accused of exerting his authority as a senior judge to step in and influence a libel case filed by the former government against a Japanese journalist of Sankei Shinmun in 2015. The journalist published a column questioning then former president Park Geun-hye’s whereabouts at the moment of the deadly sinking of the ferry Sewol. The motion passed right before his term runs out, which is still too late, but a bounden duty of the National Assembly by all means. Now the Constitutional Court will have to proceed with the trial and straighten out the constitutional order of the independence of the judge and trial.

Judge Lim is only one of the sixteen judges implicated in a broader judicial power abuse scandal surrounding Yang Sung-tae who served as the chief justice of the Supreme Court. Six among them have safely retired, and cannot be subjects of impeachment anymore. While the list of working misconduct judges goes as far as 66 judges, the Court is not announcing it, which led to another constitutional appeal set by PSPD in 2020. The Court is acquitting the current and former judges who participated in the judicial power abuse scandal, giving indulgence to the judges who crashed the independence of the trials themselves. PSPD will keep working towards reform in the court so that the ones responsible for the judicial manipulation can be punished and the trust in the trials be restored.

In the period of the general meetings of stockholders, the PSPD Center for Economic and Financial Justice hosted press conferences day after day asking for the National Pension to actively exercise their stockholder’s rights. While the National Pension responsible for the retirement asset of the people, to be able to fully perform their role, would have to utilize their rights at most, they are neglecting this duty. In the meanwhile, the corporations among the invested list of the National Pension problematic in the environment, the social sector, and corporate governance are constantly threatening the health and the safety of the people and causing societal problems. 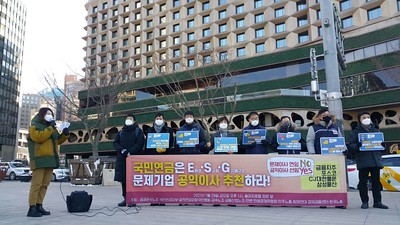 PSPD named the financial holding company that mainly caused the massive damages from the private equity investments, POSCO that erupted serious regional environmental contamination, occupational disease, and industrial accidents, CJ Logistics that neglected the overwork problem of the couriers who are suffering from the deadly labor intensity, Samsung C&T Corporation in which directors who participated in the illegal merger are still on board, as the representative corporations that have ESG➊ problems. We also asked the National Pension to actively perform their shareholder’s rights and recommend public interest directors to these corporations.

➊ Environmental, Social, and Corporate Governance (ESG) refer to the three factors in measuring the impact of the corporation on society.

Discrimination by breach of personal information and the misogynist, racist, and homophobic AI

An interactive chat-robot AI Lee Luda was a hot issue. Chatbot Lee Luda rapidly became a trend among ones in their teens and their 20s, but sexual harassment, abusive language, and hate speech the chatbot showed was rapidly problematized and the ten billion conversation data was used without the individuals’ permission in the developing process. The developers used the sensitive, private talks of the users of the app the same company managed in 2016, without notifying the owners.

Hence, on January 20th, PSPD and the information human rights groups demanded the Personal Information Protection Committee a thorough investigation on the development company of “Lee Luda” and to take action, which violated many clauses of the Personal Information Protection Act. On February 17th we opened a debate in the National Assembly and sought after <Measures to improve legislation to assure fairness, transparency, and responsibility of AI> and on February 18th, we submitted a report on the infringement on the right with B as the person directly involved, whose private conversation was unrightfully used in learning data for developing the chatbot. The Personal Information Protection Committee should carry out a thorough investigation and take adequate measures on the development company. This case involving chatbot Lee Luda is just one side of the problem a corporate AI product can cause. Enterprises should not be the only ones to be responsible for the countermeasures.

As we went through the COVID19 crisis, the need for the state responsibility of care emerged and society came to perceive it as more important. The Public Agency for Social Service in the pilot run was established to strengthen the public concern of care that was largely managed by the private sector and is said to have alleviated the care gap in the COVID19 situation. However, the law that it is based in, is still yet to cross the border of the National Assembly, causing problems on-site management. It often faces problems in administrative factors, and most of all, it keeps the national and public facilities from being chosen as prior bodies of projects, holding up the spread of public service with social service with public concern at its base.

PSPD has been urging the legislation of the Public Agency for Social Service Act to reinforce the public character of care. We submitted a report to promote the passage of this bill which was barely brushed over in the 20th National Assembly and is still hanging in the 21st, and to speak up for the legislation to stop the blank in care in COVID19. We will continue to press the National Assembly for a rapid passage.