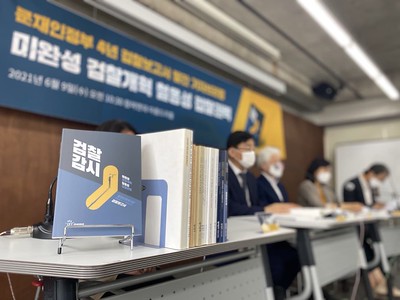 PSPD published the report on the prosecution this year without fail. We set the subtitle of the four-year report of the Moon administration as “Incomplete Reform of the Prosecution, Impregnable Authority of the Prosecutors”. Although the reform did take one step, by the launch of the Corruption Investigation Office for High-ranking Officials and the adjustment of the investigative power, there are a lot of tasks left, and the prosecution authority is still enjoying absolute power, opposing the reform.

The most crucial part of it all is the investigation status of the major incidents. We kept track of the investigation by the prosecutors in twenty-two incidents, including ▲ Lime fund investment scam ▲ Scuffle between Han Dong-hoon, a senior prosecutor accused of colluding with a reporter of Channel A ▲ ‘Controversy of Conflict of Interest’ of Rep. Park Deok-heum ▲ The fraud and medical law violations charges of the mother-in-law of former Prosecutor General Yoon Seok-yeol ▲ Ex-vice justice minister under probe over taxi driver assault ▲ Preferential sales to 100 people including public officials and the collusive link between business and politics and poor investigation accusation.

We also had a look at the fulfillment performance of the prosecution reform the Moon administration set forth. Among the seven detailed political agendas for the system improvement like the arrangement of the legislation, seven out of six showed progress, and the launch of the special investigation unit of the senior civil servants and the adjustment of the investigative authority can be marked as notable successes, but for the new criminal justice system to settle, more reform has to be carried out in prosecution.

The steady efforts to monitor the prosecution come, without a doubt, from the members’ participation and other citizens’ support. We also included the faces of people who actively participated in various activities, starting from the fund-raising for the prosecution report to urging the installation of the special investigation unit, and monitoring the abuse cases of prosecution authority, as one pillar of the report. The 256 incidents PSPD paid attention to and 1,617 prosecution personnel status accumulated in the last 13 years is available for access anytime in the database website, <That incident, that prosecutor> 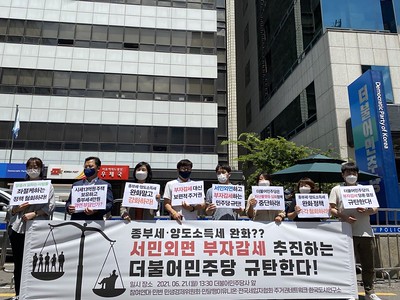 After the by-elections last April, the political sphere has ostensibly listened to the people’s voices regarding real estate and came to push against the housing policy arranged to lower the comprehensive real estate tax and property tax. In the end, the Democratic Party of Korea adopted a policy as their platform to apply the comprehensive tax for single estate holders to the highest 2% as the subjects, and lower the standard for non-taxable transfer income tax for the single estate holders to 12 hundred million won. This is a choice that would further accentuate inequality of wealth and encourage speculative acts and surrender on the real estate riches’ opposition, consisting of nonsense tax bombs and the ‘holding out will bring victory’ argument. Civil society groups including PSPD and the Lawyers for a Democratic Society(Minbyun) gathered in front of the headquarters of the Democratic Party in Yeouido to denounce the platform decision of lowering the tax for the rich.

The comprehensive real estate tax is not taxation constructed for the upper 1~2%. Its goal is to enhance the fairness of the tax burden on holding real estate and stabilize housing prices. A decision to only subject the upper 2% range goes against the object and purpose of the tax, and will only deepen the inequality of property. The transfer tax is also arranged to redeem non-labor income from real estate speculation, and thus widening the non-taxable objects will encourage the gamble. With the policy to “lower the income for the rich”, and “buy the house with debts”, the skyrocketing housing prices cannot be made lower, and neither can the property inequality be mitigated. The Democratic Party should take back the policy to ease the comprehensive real estate tax and the transfer tax as soon as possible.

With the enactment of the Serious Accidents Punishment Act and Anti-Discrimination Law, Abolition of the National Security Act, and more, the members of the PSPD would also probably have participated in the National Petition to the Assembly before. It has been a year and a half since the petition system was adopted to effectively guarantee the right of petition, a right stated in the Constitution Law. But is this purpose satisfied?

On May 24, Speaker Park Byeong-seok suggested a new regulation to alleviate the current condition of “consent of 100,000 people in 30 days” since it is too tight, and PSPD went a step further to examine the status of the petition system, that is “difficult to accomplish, and more difficult to pass” the Assembly. From the beginning of the 21st term of the National Assembly, May 29, 2020 to May 13, 2021, a total of 1,745 petitions were registered in the system whereas just fourteen were accomplished. Overall, this is because the requirement to get the “consent of 100,000 people in 30 days” works as a high barrier. The requirement should be alleviated to “consent of 50,000 people within 60 days” for the National Assembly to be able to deal with various demands from the society.

This is not the only problem there is. Even if the petition is established in the end by the consent of over 100,000 people, the Assembly stays silent. The National Assembly Act set that the examination of the petition should be done within a certain period and be decided whether or not it would be legislated, but since exceptions can be made to the regulation if the chair of the committee and the executive secretary together agree on one, most petitions are left idle in the related standing committee. Extensions of the examination period should be restricted so that it won’t be indefinite, and the right of statement should also be guaranteed, allowing the presenter of the petition to state their opinion in the Assembly themselves. PSPD will continue to work for the progress of the policy so that the National Petition to the Assembly can assure the right of the petition of the people. 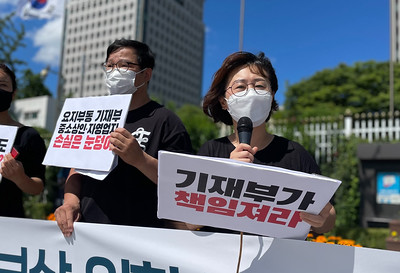 From the COVID-19 situation that lasted for a year and six months, numerous small and middle-sized sellers and businesspeople, and their employees’ livelihood reached a breaking point. Especially due to the six weeks gathering ban imposed around the end and the beginning of the year, along with the Covid restrictions that have been going on for over six months, their lives are on the brink. However, the Ministry of Economy and Finance and the Ministry of SMEs and Startups are not even coming up with trustworthy statistics on the total magnitude and harm of the business under the gathering ban and the restrictions.

PSPD conducted a study on the actual condition of the damages of the indoor sports facilities such as fitness centers, centers for pilates or yoga, bowling centers, and driving ranges — along with the Emergency Measure Committee for Indoor Sports Facilities During COVID-19.

As much as the sales dropped, the debts increased, employment dropped, and rent overdue became more frequent. Especially during the gathering ban period that lasted for about six weeks from December 8, 2020, to January 17, 2021, 52.1% of owners responded to having had debt over forty-million won, and 15% recorded over 100 thousand won of deficit. 70.3% among the owners that are suffering from over forty-million won of debt reduced employment, and 70% delayed their rents. The damages of the employers directly impacted the employees on the fields as well, marking 23% of the people downsized the number of their employees to 0.

The Compensation for Damages Act that was put off was passed as an independent work of the ruling party in the legislative subcommittee under the Trade Industry, Energy, SMEs, and Startups Committee in the National Assembly on June 16. Without a “retroactive application”, the past damages will be compensated in a “support for damage” form, which leads to the danger of not being able to provide a full remedy as the opposition party rightfully points out. We will keep watch until practical compensation and support measures are arranged.

You would be familiar with the unfortunate news of noncommissioned officer Lee of the air force who repeatedly reported the case of sexual harassment from a male superior and ended their life ignored it, and faced secondary victimization. Although whenever a case of human rights violation or sexual harassment case occurred in the army, a discussion of reform military judicial system took place, this society had to witness a heartbreaking case yet again without a fundamental solution.

PSPD, along with the Center for Military Human Rights Korea, Lawyers for a Democratic Society(Minbyun), and other human rights & civil society groups, submitted a statement that includes the abolition of military courts in ordinary times and strengthening the authority of the military human rights protection officer to the ‘TF for the abolition of sexual violence within military’ of the Democratic Party of Korea.

Adding on to this, military courts should not be operating in ordinary times and a crime committed by a soldier should also be dealt with in common courts. It is said that the TF in the Democratic Party of Korea is discussing a possibility of transferring only the jurisdiction of sexual abuse to the common court, but repeatedly occurring human rights violations and death cases in the military are not going to be solved by merely detaching certain crimes. A lot of people are feeling resentment towards the military court system that goes against common sense, and are raising intrinsic questions on the need for the existence of the military. PSPD will work together so that no more sacrifices of victims will take place.

A Dinosaur-like corporation, Coupang should take their responsibility on Fair Trade, labor, and towards the consumers 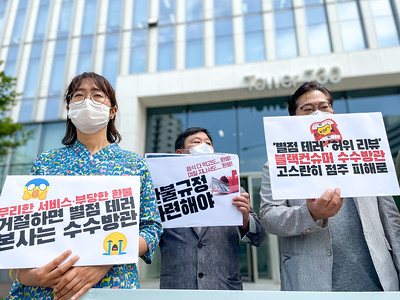 Recently, a restaurant owner from Coupang Eats unfortunately ended their life after being under the pressure of a consumer who demanded a refund for the ‘color’ of fried shrimp and left severe complaints and bad ratings, while the delivery application pushed for it. Reviews and ratings are important factors that lead to sales since it is connected with the exposure ranking within the delivery application, Coupang Eats is designed to not provide any way of dealing with false reviews because the restaurant owner cannot even comment on the consumer reviews. It is a system that neglects, remains a spectator, and generates “black consumers” that raise malicious complaints on purpose after buying a product.

Coupang is also notorious for its extreme intensity of labor and low wages. From last year until now, nine workers died in the workplace of Coupang. On June 17, a firefighter passed away while extinguishing a fire in the logistics center of Coupang, located in Icheon, Gyeonggi-do. While there were several calls of alarm about the danger of a fire, Coupang reacted idly, and initial responses were difficult due to measures such as a ban on cell phones in the workplace.

Coupang, which grew to be a giant corporation, has been violating the order of fair trade and leaving death from overwork, and even revealed an underdeveloped awareness of business management by naming the fair trade act and act on the punishment of serious accidents, as risk elements of business activities in the U.S., SEC. We cannot leave numerous damages from the leak holes in the legislation any longer. The “Online Platform Fairness Act” should be legislated as soon as possible to put an end to unfair and power trip trades of the online platform companies, including not just Coupang but also Naver and Baedal Minjok.