The 21st Presidential Election that holds the future of the Korean Society, cannot go like this

The presidential election that would take place on March 9 is only two months away. The voters are yet to get a full understanding of the philosophy and direction of the candidates of the big parties to have, the ones who stepped up to manage the country. There are many policies that are erroneous in their direction. PSPD has provided timely comments on the policies and speech of the major candidates and is constantly asking to set off on their competition on the vision and petitions.

We criticized and asked Candidate Yoon Seok-yeol to take back his outdated and outrageous comments: namely, judging the worker to be responsible for the accident at the scene of their death, emphasizing the 52-hour workweek rule as unrealistic and describing it as something that should be abolished, his position on how he would bring the National Intelligence Service to the qualification identification system of the people once he becomes the president. We also spoke regarding his suggestion that breaks the ground for the standing policies to strengthen the holding tax, i.e., restoration of the posted price, and the consolidation of the comprehensive real estate tax and the real estate tax. Moreover, Candidate Yoon is the only candidate to remain silent on the questions on the policy to relieve inequality and polarity asked by the <End the Inequality 2022 Presidential Election Voters Network>. We criticized his silence and urged him to answer the questions on policy. 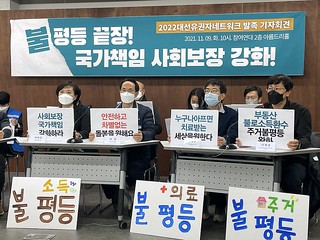 The Democratic Party and Candidate Lee Jae-myung also concern us for they are putting forward a policy to lower the taxes for the rich, shaking up the principle of tax justice. Candidate Lee revealed his position that he would postpone the increase for transfer income tax on multiple householders, and there was also a consensus from the party that the posted price of the housing would be moved back. It has only been six months since the transfer income tax increased, and a year since the roadmap for the actualization of the posted price, and “strengthening of the possession tax” is nowhere to be found. We made our position against the policy that goes against the strengthening of the possession tax, and asked for a retreat of the policies that fail to relieve the property inequality, but only deepen.

Do not neglect people’s death, the government and the presidential candidates from both party that is on the wrong hinge of the sickbed and personnel

The government stopped the staged transition to normal and restarted the intensive social distancing. The number of the diagnosed is setting records day by day, and the accumulation of patients in critical conditions and the average daily deaths have also increased greatly. It is not even a rare case for people to die while waiting for a sickbed to be available. The situation is grave.

However, although the government is calling it the emergency measures for sickbed crisis, no practical measures such as the mobilization of private big-sized hospitals that has the infrastructure to care for the patients in grave situations were not presented. Instead, they said the public hospitals would be turned into hospitals dedicated to patients with COVID-19. For the last two years, the call from the civil society, including PSPD, was consistently public sickbed and expansion of personnel.

<Stop the inequality 2022 presidential election voters network> in which a hundred workers’ and civil society groups and PSPD are working together continued one-person demonstration to ask for the securing of the sickbed and an increase in medical personnel around the Blue House and the Gwanghwamun area. We asked the government to immediately act to make the private big-sized hospitals participate, and each presidential election camp to bring forth an active measure to deal with the emergency situation in which the people’s lives are at stake. Medical services should be equal for all, and everyone should be able to be taken care of when in need. We ask for your attention also on the campaign that asks for the expansion of public hospitals (00healthcare.kr)

Used in the political battle, the Daejang-dong preventive act is only half done

<No more worries about housing! The Network for residential rights in the presidential election> and <Stop the inequality 2022 presidential election voters network>, working for the fulfillment of living rights, visited Gwangmyeong, Gyeonggi-do, where the workers from the LH speculative sales happened, for a press conference asking for the prevention and the designation of the public development sector, and a group demonstration.

According to the analysis of the PSPD, if 40% of the public housing site for Gwangmyeong and Siheong are sold to the private sector, an 11.6 billion development surplus would happen, and the private merchandise will take 2.6 billion, and individuals who get distributed will get around 9 billion won worth of development surplus and the margin. While the public housing site has been provided through expropriation for the purpose of people’s residential stabilization, the surplus would be concentrated on a few private businesspeople and individuals.

After the outbreak of the Daejang-dong development preferential treatment incident, the so-called “Daejang-dong preventive act” was motioned by many, and the parties put forth the “people’s livelihood” facing the presidential election, but the results of the regular session of the National Assembly are quite disappointing. While the city development act would restrict the private earning percent to below 10% in private-public joint projects, and the residential act that would apply a price ceiling for distribution in joint projects would be meaningful insofar as they would restrict the immense benefit of private businesspeople, but this is just setting the policies back to normal. Due to the objection of the People Power Party, who before shouted for the “special prosecution for Daejang-dong” and “return of the development surplus”, the law that restricts the surplus from the development was not able to get through. The public housing special act that would increase the rate of public housing on public land and the amendment of the residential act that would pinpoint residential public development areas were not even discussed to the lack of enthusiasm from either party.

<No more worries about housing! The Network for residential rights in the presidential election> and <Stop the inequality 2022 presidential election voters network> have been continuing to call for the National Assembly to hurry up and get through the remaining acts in the temporary assembly in December. We will work until the end for the public houses to be for all, not to be lottery prizes for a few.

The amendment to the Act on the Performance of Duties by Police Officers should be abolished.

Towards the end of last November, the Public Administration and Security Committee of the National Assembly put forth the amendment to the Act on the Performance of Duties by Police Officers. The amended law would decrease or exemption of criminal liability in them performing their duties of the police in their preventive actions and in the procedure of suppression. Without enough societal consensus, the amendment that was passed allows the police to be exempted from “exercising excessively or unrighteously” if they are not intentional or were under gross negligence.  While the range is quite comprehensive, there is no alternative to the police’s abuse of such a right. PSPD quickly asked to stop the discussions through the expression of thoughts, press conference, and emergency roundtables, and it is now on hold in the Judiciary Committee.

It is a huge dereliction of duty that cannot be excused for the police, who has the responsibility to protect the life and the body of the people, practically ran from the scene of the crime. Providing for a greater degree of reduction of the blame on the police is not a proper solution. The incidents that were criticized were because of their improper first actions or continued investigation, not problems that occurred from the lack of this clause. In order to heighten the confrontation ability on-site, there should be education and exercise, and an increase in personnel who can rightfully carry out the job. The amended “Act on the Performance of Duties by Police Officers” that can be the indulgence for a physical power abuse of the police by its vague and comprehensive restriction, should be abolished.

Autonomy is not a condition! OPCON should be retrieved unconditionally

Last December 2nd, the Security Consultative Meeting between the ROK and the US Defense Ministers was held to discuss the two state’s issues on military and defense. It received a lot of attention since the peace process on the Korean peninsula is at a deadlock and the strengthening of the India-Pacific strategy to contain China arose over the surface.

PSPD requested the government to select peace instead of the arms race in SCM, and issued card news on the reason for an unconditional retrieval of the OPCOM. We also hosted a joint press conference in front of the Ministry of Defense, to call for *unconditional retrieval of OPCOM, *a halt of the joint military exercise in 2022, *opposition to the joining in the India-Pacific strategy of the U.S. to contain China, *removal of THAAD and opposition to the participation of MD and arms increase.

However, the results of this meeting are extremely disappointing. There is the highest ever chance for Korea to bandwagon on the containment strategy of the great power the U.S. Particularly, the Moon administration’s plan to retrieve the wartime operational control utterly failed. This is the consequence of being bound by ambiguous “conditions” and unnecessary “verification”. The joint operation strategy is expected to change more aggressively. It is a serious problem for the SCM to express “the importance of maintaining peace and stability in the Taiwan Strait” for the first time. Now that the militaristic interference of the ROK-U.S. alliance within the region has expanded, there is a greater possibility to bring conflicts with the neighboring states such as China and encourage the arms race.

The political landscape around the Korean peninsula is rapidly changing. Rather than strengthen the cold-war like military alliances, now is the important time to establish and consistently carry out a defense and diplomacy strategy that seeks peace. PSPD will not let small changes pass, and continually raise voices for peace.