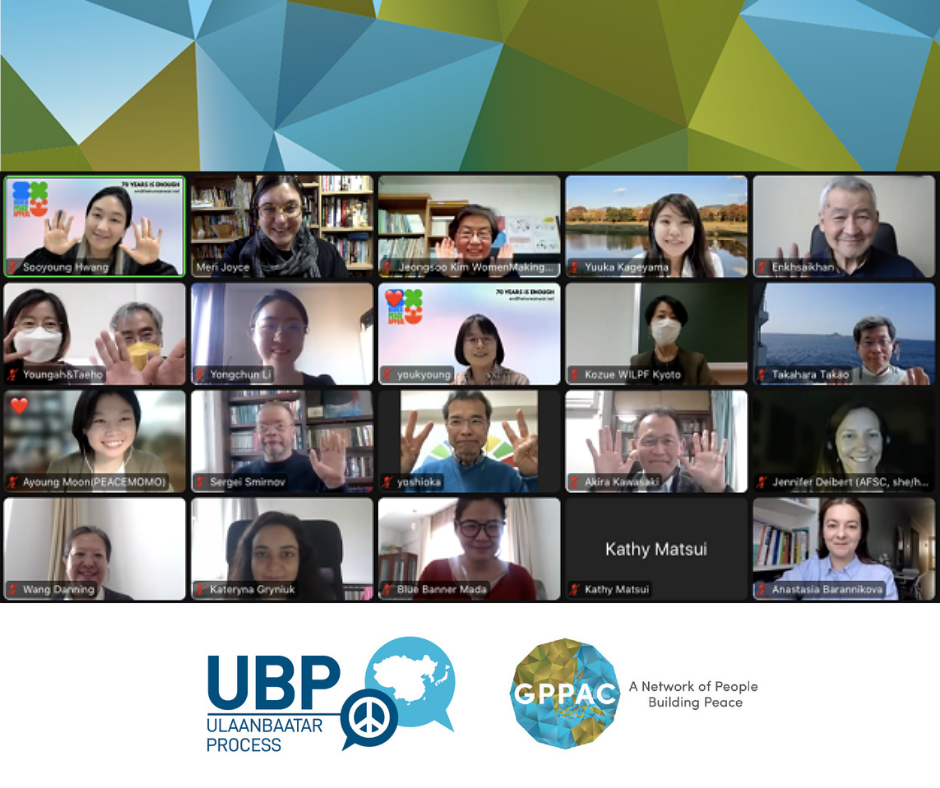 On April 20, 25 GPPAC Northeast Asia members and friends joined an online dialogue to discuss the results of the recent Republic of Korea Presidential election and their implications for peacebuilding and security on the Korean Peninsula and in Northeast Asia more broadly, as part of the Ulaanbaatar Process.

Participants from throughout Northeast Asia including Beijing, Kyoto, Seoul, Tokyo, Ulaanbaatar, Vladivostok, Yokohama, as well as Europe and the US joined the dialogue. The closed session began with a presentation by Hwang Sooyoung of People’s Solidarity for Participatory Democracy in Seoul; the text of her paper can be read below.

Perspective on the implications of

Sooyoung Hwang  Manager of Center for Peace and Disarmament, PSPD

The current situation surrounding the Korean Peninsula is hard to predict. The direction of the Peace Process on the Korean Peninsula of the Moon administration was appropriate, and actual results such as the Panmunjom Declaration and 9.19 Inter-Korean Military Agreement were achieved. However, the DPRK-US dialogues have been halted without reaching a common ground after Hanoi no deal in 2019. The ROK-US joint military exercises resumed, although they were scaled back, followed by additional US sanctions against North Korea, and South Korea has continued to increase its military spending.

Finally, on March 24, North Korea conducted a test-firing of an ICBM. It lifts a self-imposed moratorium on tests of nuclear and ICBMs, which has been in place for nearly four years since April 2018, and is against the inter-Korean agreement to defuse military tensions and substantially remove the danger of a war on the Korean peninsula. The ROK and US governments are conducting joint military exercises in the first half of the year, and North Korea conducted a test-firing of a short-range ballistic missile on April 16. This is the 13th test this year. Military tensions surrounding the Korean Peninsula are rising again ahead of the inauguration of a new government.

Pyongyang declared its commitment to continued reinforcement of its defense at the 8th Congress of the Workers’ Party of Korea in 2021. Pyongyang’s plans include advancing its nuclear technology, as well as developing a wide range of new weapons, including tactical nuclear weapons, a super-large nuclear warhead, hypersonic weapons, solid-propellant intercontinental ballistic missiles (ICBMs), nuclear-powered submarines, and underwater launch nuclear strategic weapon and raising hit rate in range of 15,000km. Revealing its determination to continue to implement its Five-Year Plan for the Advancement of Defense Sciences and Weapons Systems Development, Pyongyang has continued missile launch tests. Its stance is clear. It needs to reinforce its armed state as ‘a matter of self-defense’, and the international community’s condemnation thereof only reflects a ‘double standard’.

The US is currently pushing for new UN sanctions. It is said to include banning all delivery systems including not only ballistic missiles but also cruise missiles, and halving the annual oil export cap to North Korea. However, as we all know, it is unclear whether the resolution will be passed with the consent of the permanent members of the Security Council.

While North Korea diversifies its nuclear power and strengthens its practical nuclear capabilities such as tactical nuclear development, skepticism is also growing in South Korea on whether complete denuclearization is a feasible goal. Sanctions against North Korea are not working effectively to stop the North Korean government from developing nuclear weapons and missiles, and dialogue and diplomacy are not playing its role. While South Korea’s military spending is 1.5 times of North Korea’s total GDP and the South Korean and US governments’ conventional forces overwhelmingly superior to North Korea, North Korea will not stop trying to make up for this military inferiority with its nuclear and missile capabilities.

In addition, Russia’s invasion of Ukraine is highly likely to raise security concerns of North Korea. North Korea has recognized that Iraq and Libya were destroyed because they have given up nuclear weapons and the Ukraine situation can be recognized as the same. Meanwhile, North Korea has opposed the UN General Assembly resolution condemning Russia’s invasion of Ukraine and demanding the withdrawal of troops. It was also against a resolution suspending Russia’s membership of the UN Human Rights Council. The situation surrounding the Korean Peninsula is getting more complicated.

Foreign and Security policy of the President-elect Yoon Suk-yeol

I am not sure whether you have read the President-Elect Yoon Suk-yeol’s article on Foreign Affairs. The word ‘Peace’ only appears once in the article. I think that it is a clear indicator of his ideas on peace. The Yoon Suk-yeol administration’s foreign and security policy is likely to be significantly different from the Moon Jae-In administration. We are very concerned about it. Let me share a few points with you.

Meanwhile, the 2018 Panmunjom Declaration and the Pyongyang Joint Declaration were not approved by the Korean National Assembly. Opposition party (Conservative party) does not have a strong consensus on the need of implementing the inter-Korean agreement. The President-elect Yoon also mentioned the annulment of the 9.19 Inter-Korean Military Agreement during the presidential election campaign. He also made pledges to designate North Korea as ‘the main enemy’ in the Defense White Paper and appoint North Korean Human Rights Ambassador in South Korea, which was vacant under the Moon administration.

Personnel selection by the new government

Currently, the people in charge of foregin and security policy are mostly from the Lee Myung-bak administration. They are the ones who designed the “Vision 3000” (a plan to make North Korea’s national income 3,000 dollars within 10 years with the international community if North Korea gives up its nuclear programs). One of them also had to step down after being seriously criticized for enforcing the South Korea-Japan GSOMIA(General Security of Military Information Agreement) in secret. Next week, the President-elect Yoon Suk-yeol will send the South Korea-Japan policy consultative group to Japan. The policy consultative group has been criticized for including those responsible for the Park Geun-hye government’s 2015 Japanese Military Sexual Slavery agreement, which was heavily criticized by the public for declaring it as ‘irreversible’ resolution without collecting opinions from the affected parties. These personnel appointments make us expect that the Yoon Suk-yeol administration will repeat the failed policies on foreign and security of the Lee Myung-bak and Park Geun-hye administrations.

Reinforcement of the ROK-US alliance

The President-elect Yoon Suk-yeol has insisted on “rebuilding the broken ROK-US alliance”. In fact, the ROK-US alliance has never collapsed. He, through his pledges, has been an advocate for the strengthening of the ROK-US alliance and of confrontational diplomacy strategies, including the rebuilding of the ROK-US combined defense posture, strengthening extended deterrence, and the joining of the Quad working group. Yoon is opposed to South Korea’s independent nuclear armament. But he insists on strengthening the ROK-US extended deterrence, including nuclear umbrellas. Yoon’s delegation discussed deployment of US strategic assets to South Korea with US National Security Advisor Jake Sullivan this month. He also pledged that the South Korean military would deploy additional THAAD.

In February and March, there was a report that the Moon administration disagreed with holding the South Korea-US-Japan joint military exercise proposed by Japan and the US. But, it is clear that Yoon Suk-yeol will go in the direction of covering up the past issues between South Korea and Japan and further strengthening military cooperation between the US,  Japan and South Korea. The possibility of pushing for the South Korea-Japan Acquisition and Cross-Servicing Agreement (ACSA) after GSOMIA cannot be ruled out. We are very concerned that the new Cold War structure in Northeast Asia will be strengthened.

Our activities and Suggestions

For the above reasons, progressive civil society groups in South Korea are very concerned about the upcoming Yoon Suk-yeol administration. The Korea Peace Appeal Campaign has proposed the following three points to the next government.

The Korea Peace Appeal Campaign will continue to urge the next government to ease military tensions on the Korean Peninsula and implement the existing inter-Korean and the DPRK-US agreements. It is expected that various things will be promoted in the relationship between South Korea and the US and Japan to prevent peacebuilding in Northeast Asia. South Korean civil society will focus on opposing and preventing such things.

As the military confrontation on the Korean Peninsula is expected to become more serious, solidarity action by GPPAC and international civil society will continue to be needed to criticize the policies against peace and emphasize a peace-first approach. With the 70th anniversary of the armistice agreement next year, I hope we can create a common international voice that calls for an end to the Korean War for peace and a nuclear-free world and plan activities together to create widespread consent from the UN member states.