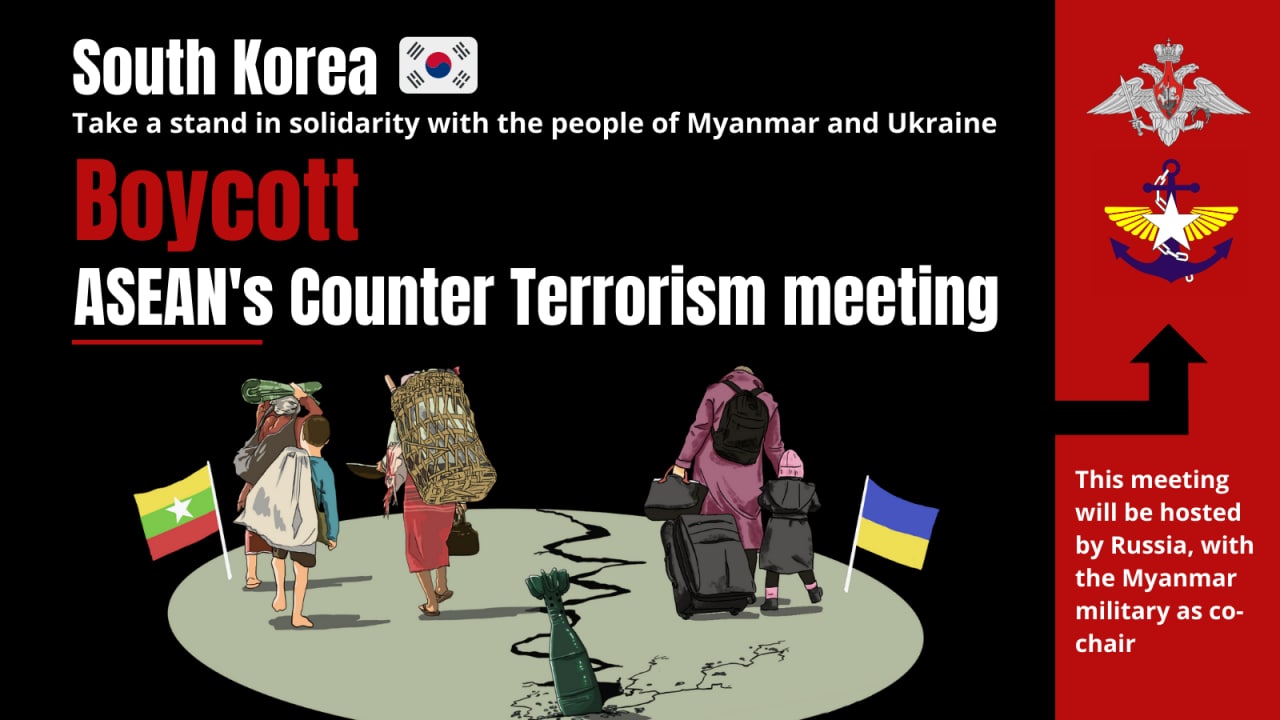 We, the undersigned 488 organizations from throughout Myanmar and the world appeal to you, as a representative of the Government of the Republic of Korea and the minister responsible for Korea’s defense engagement with ASEAN, to boycott the ASEAN Defence Ministers’ Meeting-Plus Experts’ Working Group (ADMM-Plus EWG) on Counter Terrorism, co-chaired by the Myanmar and Russian militaries. We welcome the decisions of Australia and New Zealand to not participate in the upcoming meeting scheduled for 20 – 21 July in Moscow, Russia. We welcome your government’s previous decisions to suspend all defense exchanges with the Myanmar military and ban arms exports to Myanmar, as well as the joint effort to call on other countries to halt the supply of arms to the Myanmar junta. We further request that your immediate decision is consistent with past commitments by boycotting the ADMM-Plus EWG on Counter Terrorism.

The Myanmar military has long committed international crimes under the pretext of “counter-terrorism”. The most egregious case was the Myanmar military’s 2017 genocide against the Rohingya, which, according to the UN Independent International Fact-Finding Mission on Myanmar, involved the launch of “clearance operations” that were supposedly aimed at the “elimination” of the Arakan Rohingya Salvation Army. In reality, it involved the murder, massacre, torture, rape, and gang rape of Rohingya, forcing over 700,000 to flee to Bangladesh under the guise of counter-terrorism.

The military’s abuse of anti-terrorism law and practices continued after its illegal coup attempt. One strategy of the junta has been to attack democratic institutions and justify ongoing atrocities by designating the National Unity Government (NUG), Committee Representing Pyidaungsu Hluttaw (CRPH), and Peoples Defence Forces (PDFs) as “terrorists”. In 2021, the Myanmar military used its co-chair position of the ADMM Experts’ Working Group to legitimize its illegal junta and to seek support for its terrorism designations against the NUG, CRPH, and PDFs. Its leadership of the group was also used as fodder for domestic propaganda, with photos and details of the meetings featured prominently in military-controlled media targeting a domestic audience.

Meanwhile, in June 2022, the military junta announced a planned execution of four men, including two respected democracy activists, for ungrounded allegations of terrorism — rejecting a plea made by ASEAN Chair Prime Minister Hun Sen. Such actions demonstrate the junta’s total disrespect of and unwillingness to implement ASEAN’s Five-Point Consensus, which demands an immediate cessation of violence and a dialogue among all parties concerned. The junta’s ongoing operations against civilians — including torture, indiscriminate attacks, airstrikes, artillery shelling, burning of villages, and looting — are increasingly deploying new tactics of terror to commit widespread and systematic crimes throughout the country. This is exemplified by the junta soldiers’ acts of beheading and desecrating unarmed civilians in Sagaing Region. These acts clearly constitute terror under international and national law. A body responsible for such terror and gross atrocities is devoid of legitimacy and is in no position to lead or participate in the ADMM-Plus EWG on Counter Terrorism.

The Working Group’s other co-chair, Russia, is similarly in no position to lead or participate in ASEAN counter-terrorism cooperation. Russia’s unprovoked invasion of Ukraine must be condemned as an attack on democracy and a violation of international law and norms. Since its invasion, Ukraine has documented 15,000 suspected war crimes as of 31 May, and the situation in Ukraine has been referred to the International Criminal Court by 43 State Parties. The Ukrainian government has estimated that “at least tens of thousands” of Ukrainian civilians were killed in the first 100 days of Russia’s invasion. Since 24 February, at least one-third of Ukrainians have been forcibly displaced. Your government’s announcement to tighten export controls of strategic items and block Russian banks from international payment systems must be in line with your approach to the Myanmar military junta.

7. All Arakan Students’ and Youths’ Congress

12. All Schools of Aungmyaythazan Township Strike

54. Cambodian Americans and Friends for Democracy and Human Rights Advocate

102. Federation of Worker’s Union of Burmese Citizens in Japan (FWUBC)

126. In Defense of Human Rights and Dignity Movement (iDEFEND), Philippines

174. Korean Civil Society in Support of Democracy in Myanmar (106 NGOs)

323. Save and Care Organization for Women at Border Areas

326. Save the Salween Network

337. Solidarity for Another World

346. Support Group for Democracy in Myanmar (The Netherlands)

363. The Center for Freedom of Information

380. US Advocacy Coalition for Myanmar (USACM)

* 33 Myanmar civil society organizations that have chosen not to disclose their names.