The farming town of Daechuri, Korean for “Great Harvest Village”, will never reap its famous rice harvest again, if the United States military continues with the planned expansion of its army base. This concentration of U.S. troops in the Pyeongtaek region of South Korea will destroy the farming communities. Over 500 households and thousands of residents live within the zoned areas. The rice farmers have chosen to resist the occupation of their homeland and stand up to the Korean government and the United States military. Facing the imminent onslaught of bulldozers, riot police, and two nation’s militaries, the farmers of Pyeongtaek have decided to risk imprisonment and death before they will willingly surrender their homes and their way of life. These peaceful villagers have fought the expansion of the base through all possible legal means while being deceived and ignored. However, on the early morning of May 4th, 2006, forced execution of this project occurred accompanied by 14,000 policemen and army force as well as 600 privately hired bodyguards. While 1000 protestors resisted, this tragic event resulted in injury of more than 210 protestors. These numbers, needless to say, reveals how “cruel” police and army force operation was carried out. 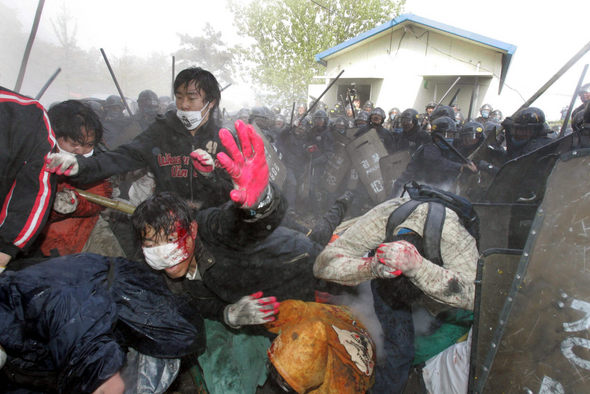 By Jung-Eun Park, Center for Peace and Disarmament

This May, Pyeongtaek is of an isolated and helpless land because instead of the Korean Army Force providing national defense, it is fighting against people they should rather be protecting. The Korean Army Force along with 2,000 policemen is currently keeping a strict watch of Pyeongtaek, the site newly expanded U.S. military base is planning to occupy. These police are not only restricting the entry of local citizens in effort to guard the area, but the government has invaded protestors’ main quarter in attempt to enforce coercion to wipe out and evict all opposing farmers and human rights activists by issuing unsubstantiated arrest warrants, using excessive force, and implementing military law.

Can the Republic of Korea really call itself a democratic nation?

The government and the conservative media are making the locals thwarting the expansion of U.S. military base appear as being motivated by external group of corrupted force and that it is them who are unreasonably protesting against the United States regardless of the wills of local Pyeongtaek farmers. At the same time, the government is insisting that the plan to relocate U.S. military bases on the peninsula is being forged ahead as a legal national policy as a result of negotiation and the National Assembly’s ratification.

Is this indeed the authentic portrayal of what is really happening? The government and the media tries to simplify the existing conflict by making the locals of Pyeongtaek appear as though they are resisting the U.S. army base relocation project for the mere purpose to remove all existing U.S. army force in Korea. Also are local farmers of Pyeongtaek labeled as “millionaires” by the government only refusing a deposit because they are brainwashed by the external group of corrupted force?

The tension that comes with U.S. troops being stationed abroad is bound to exist not only in Korea but elsewhere in the world. This tension is especially great in such case of Pyeongtaek because the local people are being evicted of their home and property for the sole purpose of the scope of activity by the U.S. Army Force in Korea. Thus, the collision between two sides is destined to occur. When the government disregards the right these local people have of their homes and their properties but simply apply excessive violence and force to achieve their outcome, it can be considered as nothing more than a “national violence.”

Nonetheless, the government and the conservatives attempt to taint the image of the U.S. army base relocation retaliation movement. It should be reminded that the residents of Pyeongtaek first settled at the location not by choice but under the governmental force. Yet, the government is forcing these people to move out again. The government states that these so-called “millionaires” expressing their right to survive is nonsense and them refusing to accept the government’s “forced” expropriation of their land is of a compensation issue. The government failed even to attempt to convince or listen to the locals’ point of view on the issue but one-sidedly enforce what was the negotiated outcome with the United States.

No wonder, to the residents of Pyeongtaek, the government is the least reliable source of a safe guard. Hence, the ones who are most infuriated by the forcible execution of this project is the local people themselves and not any external corrupted force.

It appears that there shouldn’t be any hurry to this U.S. base relocation project that the government regards as a national policy operation. The old U.S. army base to be restored faces numerous environmental damages yet failure to credit its liability is only delaying the problem from being resolved. Also the due date of release the Master Plan including its expected expense was postponed to September. Then what is the motive that is making the Ministry of National Defense to forcibly execute this project by incorporating various extreme measures?

The real motives behind the excessive and irrational execution of the U.S. army base relocation project lies on its faulty and amiss negotiation and the strategic flexibility of the United States.

The U.S. base relocation negotiation of U.S. troops stationed in Korea began back in the year 2003. Yet, on January of 2006, the process of the negotiation of U.S. troop’s strategic flexibility depicts a serious change between the alliance of Korea and the United States. Even when the Korea government emphasized that for the first time, fair and genuine negotiation took place; it was merely accepting all the requests put forth by the United States. Thus, the result to relocate the U.S. army base was not to be a simple change of its location but a change in the army base’s role and functions it serves.

Therefore, the U.S. base relocation cannot be a problem limited solely to the Pyeongtaek civilians but this nation as a whole as it will directly affect the Korea Peninsula’s peace and the public’s safety along with the great financial burden to the entire nation.

Regarding all the problems associated with the relocated U.S. army base and its purpose and the cost, the government has addressed these issues in a very unconvincing and unacceptable ways. They have made it seem as though the U.S. base relocation was the will and suggestion of Koreans. Also they have made it seem everything conforms to the national interest even without thorough examination of the cost and national consensus.

The opposing locals and other human rights activists want the government to stop with forced execution but fix the flawed negotiation. Also the Pyeongtaek base, which U.S. troops will occupy, displays strategic flexibility that ultimately bring forth disputes and conflicts in the Korea Peninsula and all this is what the government is trying to hide.

The government needs to recognize that this irrational execution of wrongfully negotiated outcome is bringing upon tremendous social price and conflicts. In process of trying to make an area without any military establishments into the institution of military affairs, the government applied violent and forced execution on May 4, 2006. The Korean Army Force not only has fenced off the Pyeongtaek area and prohibited all civilians from access but the fact that they contributed to the cause of expanding U.S. army military base has increased the possibility of clash between the civilians and the army force.

It is a wonder how Pyeongtaek and Roh-Moo Hyun administration will go recorded in history. Will it be the day the alliance between the Republic of Korea and the United States was most firmly executed even by demolishing of the public? Or will it be known as a day the world’s largest scale U.S. army base in Pyeongtaek was established to insure the U.S army and strategic flexibility? Either way, Roh-Moo Hyun administration is destined to be the ultimate “failed administration” without a doubt.

Center for Peace and Disarmament