On May 27th, some solidating civil organizations and PSPD held a press conference to denouce a flawed election by a military regime as a part of global action against Burma’s 2010 election. Sending postcards to the President and getting citizens’ signatures were followed. 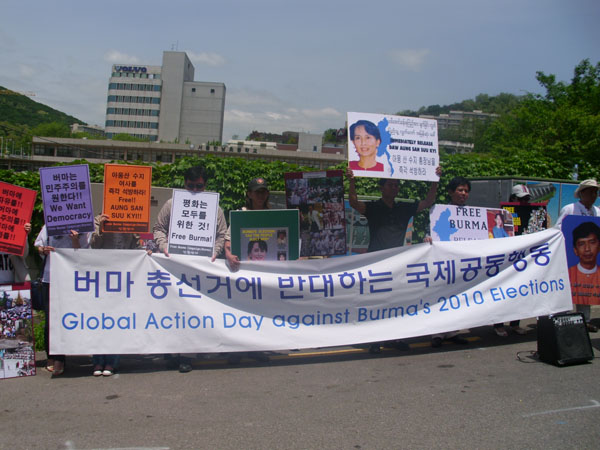 – press conference in front of Burma Embassy in Hannam-dong 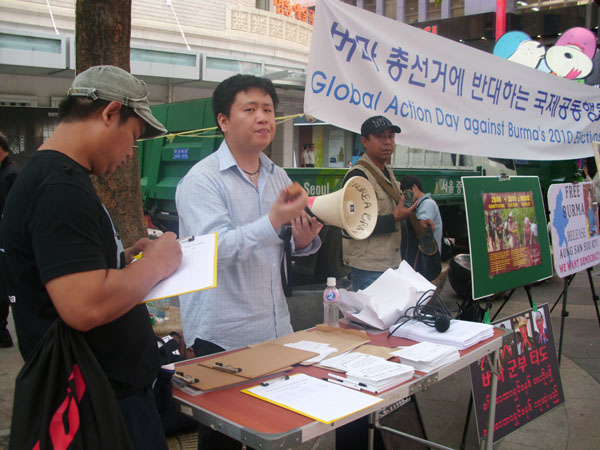 – event of sending postcards to the President and getting signatures

Ten alliances of Burma’s democracy and ethnic rights movement have launched the Global Campaign Against Burma’s 2010 Military Elections. It has been endorsed by over 160 organizations worldwide. The campaign calls on the international community to “denounce the military’s sham elections and call for real democratic change.”

After almost five decades of military rule, the people of Burma want real, democratic, people’s elections. It is now clear, however, that the military regime’s first elections in twenty years will be nothing but a thinly veiled attempt to legitimize military rule. Now that Daw Aung San Suu Kyi, the National League for Democracy, and other opposition parties inside Burma have determined they cannot participate in these flawed elections, it is more important than ever that those outside of Burma raise their voices in support.

The ‘success’ of the regime’s sham elections will depend on cooperation and the legitimacy lent by Burma’s neighbors and friends. This is why the Global Campaign Against Burma’s 2010 Military Elections, calls on international governments to denounce these military elections and refuse to recognize the results unless the junta changes course and meets the minimum benchmarks.

The leaders of the campaign, the Ten Alliances of Burma’s democracy and ethnic rights movement, represent the most broad-based and multi-ethnic cooperation of political and civil society organizations from inside and in exile working for national reconciliation, peace, and freedom in Burma. The Campaign Against Burma’s 2010 Military Elections was launched on 19 March in Bangkok, with the support of over 150 groups from all over the world.


* this article, courtesy of http://burmapartnership.org/2010elections/
sent by FORUM ASIA