The increasing number of victims of leukemia, brain tumors, and other rare cancers in Samsung semiconductor factory in Korea has been provoking a debate on the causes and social responsibility for such industrial disasters. In the middle of such debate, four Korean NGOs, People’s Solidarity for Participatory Democracy (PSPD), Corporate for All, Korean Women Workers Association, and Environmental Justice disclosed the report on 『Problems of Chemical Exposure Control at the Samsung Electronics’ Semiconductor Plant in Giheung』on September 28th, 2010, and PSPD sent the report to All Pensions Group (APG) of the Netherlands on December 16th, 2010. PSPD called on APG to take the report into consideration for monitoring ethical management based on the UN PRI (Principle of Responsible Investment).

※APG (All Pensions Group) is a Dutch organization that administers the collective pension scheme for the government and educational sectors. The asset size is 315 billion as of 2007 and reaches world number three.

※UN PRI (Principles of Responsible Investment) is a set of guidelines for investors wishing to address environmental, social, and corporate governance (ESG) issues. PRI should be considered alongside more traditional financial factors for long-term sustainable performance of corporations. The principles were launched by the secretary-general of the United Nations, Kofi Annan at the New York Stock Exchange in April 2006.

On May 21, 2010, APG and seven European institutional investors under the UN PRI had sent an inquiry letter to Samsung Electronics in response to Samsung Electronics’ announcement on the leukemia cases in Samsung Electronics that it would form a third-party-consortium to carry out an epidemiological survey and raised six questions about ▶when the company would implement their plan ▶what the company would do with the results of the survey ▶to what extent they would open the results to the media and investors ▶whether they provided medial support to their ailing former employees ▶whether they provide appropriate employee trainings, and ▶the efficiency of the whole workplace safety control.

The report sent by PSPD pointed out problems based on the Advisory Report of 『the Chemical Exposure Control at Samsung Semiconductors Plant』by Seoul National University as follows: the chemical use and its problems, the problems of the working environment assessment, and the installation of gas detectors and related problems in the Giheung plant. Seoul National University conducted an epidemiological survey to measure the level of risks in semiconductor plants in six plants of the three semiconductor companies – Samsung Electronics, Hynix and Amkor Technology Korea for the period of June to September in 2009. The advisory report that analyzes the management of the chemical exposure in Samsung Giheung plant was not disclosed so far. 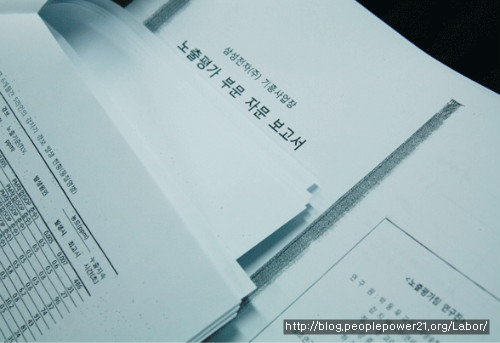 Korean NGOs urge Samsung Electronics that △the cases of employees contracting leukemia at Samsung Electronics should be recognized as occupational diseases and they should take responsibilities for the solution, ►the ailing workers and the families of the deceased should be given appropriate compensations, and a better workplace environment should be provided, ►they should open the proceedings of the epidemiological survey to the public to iron out the leukemia cases in Samsung Electronics argued since 2007 and go on farther protecting lives and health of the workers in the semiconductor industry. Meanwhile, they require ►the government should recognize the cases as industrial accidents, make thorough investigations and amend related laws without hesitation, ►the National Assembly should force the government to carry out a reliable investigation of the case amend laws concerning industrial accidents and chemical control.

Meanwhile, APG says they are going to address the issue report 『Problems of Chemical Exposure Control at the Samsung Electronics’ Semiconductor Plant in Giheung』 issued by PSPD, Corporate for All, Korean Women Workers Association, and Environmental Justice to other institutional investors that jointly took parts in an inquiry of Samsung Electronics on May 21st.