“No More Victims in the Samsung Electronics”

In 2003, Yoo-Mee Hwang, a third-year student at Sokcho High School, was employed just before her graduation at the Samsung Electronics’ Semiconductor Plant in Giheung. She participated in the defusion process dipping wafer – a thin slice of semiconductor material – into compounds such as hydrogen peroxide and ammonium sulfide. Ji-Youn Park was also employed at Samsung Semiconductor Plant in Onyang. Unable to proceed with her study in college, she had no choice but to start working prior to high school graduation. This eighteen-year-old girl worked in the examination process handling lead solvent and other chemicals. Their pride of working in a leading corporation in South Korea withered away very soon. Both of these young girls got Acute Myeloid Leukemia after two years of work in the corporation and passed away in 2007 and 2010. 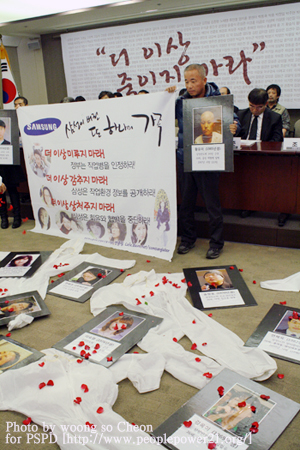 While South Korea’s gross national income per capita exceeded 20,000 U.S. dollars in 2007, adolescents from poor families are still under pressure of getting a job soon after mid-school or high-school graduation. Shoe and clothing industries in 1970s have changed into high-tech clean industries such as semiconductor and LCD, but laborers are still in danger of death from hundreds of toxic chemicals used in IT products.

Several years have passed since the laborers working at the Samsung Electronics’ Semiconductor Plants in Giheung and Onyang became victims of Acute Myeloid Leukemia. Nothing has been done, however, for their industrial injury treatment and compensation. The danger of working in these high-tech industries has increasingly been revealed after the continuing social exposure of the deaths of the Samsung Electronics’ laborers. According to the Supporters of Health and Rights of People in Semiconductor Industry (SHARPS), over 100 laborers got lethal disease including leukemia, lymphoma, and brain tumor and 31 have already passed away. Although a further systematic examination is needed for confirming the causes of these deaths, this approximate number of victims in a single corporation is already an alarming signal to the society.

Afraid of harming its image, Samsung has denied its responsibility and rejected to provide injury compensation for its laborers. The governmental branches under charge of industrial safety and accidents such as the Ministry of Employment and Labor, the Korea Occupational Safety and Health Agency, and the Korean Workers’ Compensation and Welfare Service are putting emphasis on industrial security over laborers’ rights. As the Samsung Electronics and the South Korean government shirk their responsibilities and as our society disregard the people who actually make the fascinating smart phone and maintain high speed internet, the laborers who devoted their lives to the Samsung Electronics are taking occupational disease and passing away without proper treatment. 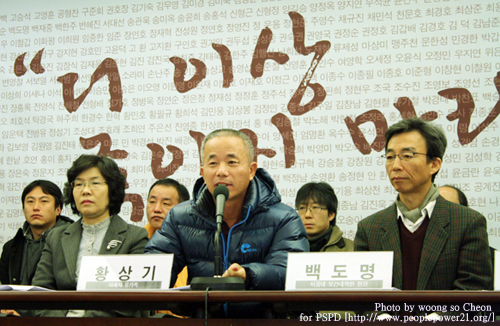 First, Samsung should admit its responsibility of the laborers’ occupational disease and do its best to solve the problem.

Samsung is the leading corporation in semiconductor industry, occupying 35% in the DRAM semiconductor world market and exceeding 5 trillion won in the second quarter of this year. Samsung’s attitude toward this case of occupational disease, however, is very disappointing. It is obvious that laborers in semiconductor industry handle toxic chemicals and that they are able to accidently be exposed to those chemicals. Samsung has ignored this obvious fact, only caring for its faultless image. Samsung has neglected its suffering laborers and preventing them from receiving industrial injury compensation from the government.

Instead of concealing the case, Samsung should take the responsibility of its victims. The first step is to admit that the suffering laborers as the victims of occupational disease.

Second, the government should confirm the diseases as industrial accidents, conduct a reliable and systematic examination, and take charge of revising the relevant legislations.

While 16 Samsung laborers suffering from occupational disease have applied for industrial accident by now, 10 cases have been disapproved by the government and 6 are still pending. While the Industrial Accident Compensation Insurance aims at protecting laborers by immediately compensating for laborers’ industrial accident, the government is asking for a clearer scientific causal relation from the victims who do not even have information accessibility. Furthermore, it is revealed in a recent inspection of the administration affairs that the government took allowed the Samsung Electronics to actively participate in the administrative lawsuit filed by the laborers. Now it is confusing whether the government serves for employees’ welfare or Samsung’s welfare.

Doing its duty to protect laborers’ life and health, the government should admit the suffering laborers as victims of industrial accident. In order to serve the purpose of the Industrial Accident Compensation Insurance, the government should revise the legislations related to industrial safety and accident and relax the responsibility of the victims to provide scientific evidence in support of occupational disease.

Third, the National Assembly should force the government to conduct a reliable examination and revise the legislations related to industrial accident and chemical management.

In the most recent inspection of the administration affairs, both governing and opposition parties urged the government to solve the case of Samsung laborers’ occupational disease. While there has been a single examination from the government, however, it was suspicious in terms of impartiality and reliability. The current examination conducted by Samsung itself is also far from being impartial.

Accordingly, both governing and opposition parties in the National Assembly should collaborate with each other to conduct a reliable examination at the national-level. In addition, both parties should immediately revise the legislations related to industrial accident and chemical management and provide a prompt and impartial protection for the laborers suffering from industrial accidents.