Item 3: Promotion and Protection of all Human Rights, Civil, Political, Economic, Social and Cultural Rights, including the Right to Development 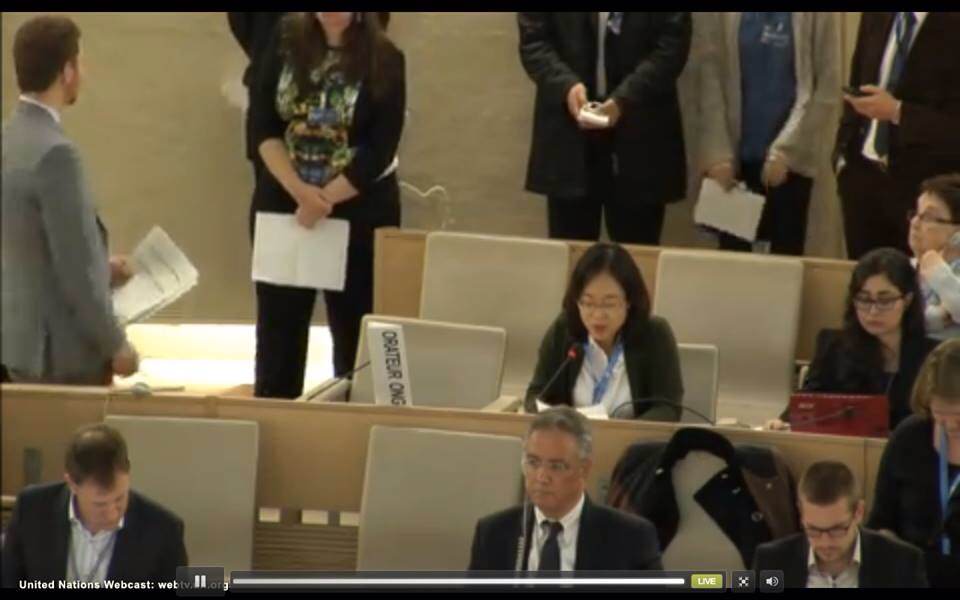 Oral Statement Delivered by Ms. Gayoon Baek on Behalf of

Madam Sekaggya, we appreciate your report following the visit to the Republic of Korea (A/HRC/25/55/Add.1), in particular the emphasis made on judicial harassment against defenders under the charges such as obstruction of business, violation of the National Security Act (NSA) and criminal defamation. We echo your concerns on the impact of strained relations between the two Koreas on the legal, political and institutional frameworks related to the legitimate activities of defenders in the country. We are further disturbed by the government’s tendency to vilify the legitimate work of defenders as “pro-Democratic People’s Republic of Korea” which has been used to restrict civil society space.

We draw this Council’s special attention to the online harassment of individuals and groups holding dissenting views by the National Intelligence Service (NIS). Civil society organisations such as the No Jeju Naval Base campaign, the Korean Confederation of Trade Unions, and the Korean Teachers and Education Workers Union have been among those targeted. The abuses of power by the NIS in stigmatizing dissent in the country have been well documented, including the slander of opposition candidates and human rights defenders during the 2012 presidential election.  We urge the government to seriously address all cases of abuse of power by the NIS through a thorough, transparent and independent investigation.

Madam Sekaggya, we concur your concern that the defenders protesting against large-scale development projects are subjected to excessive use of force by police and private security firms, as well as heavy fines and penalties. In Miryang, where high voltage power transmission towers have been constructed, 83 defenders and villagers were arrested as of February 2014 and two villagers took their own lives out of desperation. The government and the Korea Electric Power Corporation’s (KEPCO) reluctance to engage in inclusive and pluralistic consultations with defenders and Miryang villagers is also cause for concern. We urge the government to immediately engage in a genuine dialogue with defenders and villagers and adopt a human rights-based approach to development policy.

Finally Madam Sekaggya, we value your recommendations on labour rights, which are being seriously undermined in the country. A recent strike by the Korean Railway Workers’ Union against the government’s privatization and restructuring policy was declared an ‘illegal’ strike  and the national court approved provisional seizure of property amounting to 11.6million USD belonging to the union as requested by the company. We urge the government to end the criminalization of the legitimate exercise of the right to strike by defenders through the imposition of excessive and unwarranted financial penalties.