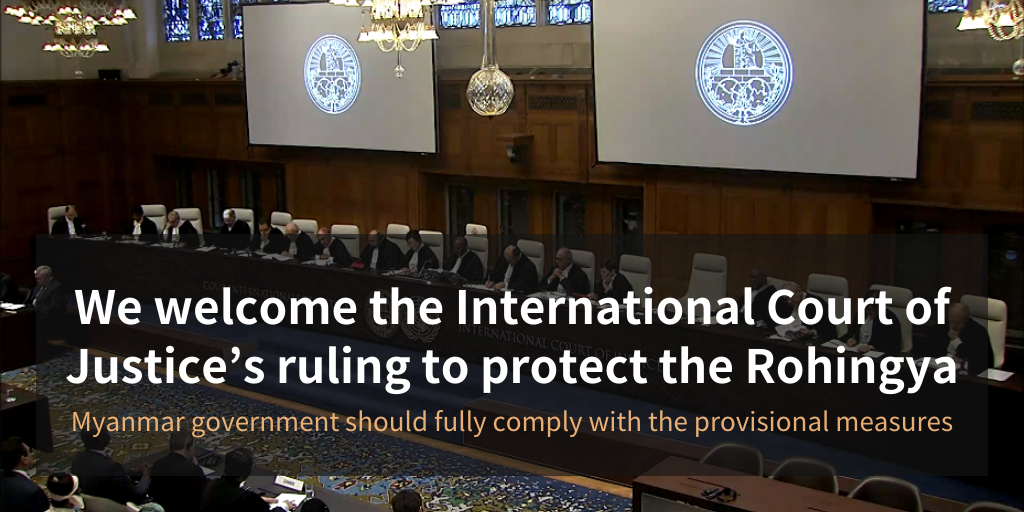 Myanmar government should fully comply with the provisional measures

Punish the ones responsible for genocide, and stop all discrimination and oppression against the Rohingya

On January 23rd, the International Court of Justice (ICJ), the principal judicial organ of the UN, ordered the Myanmar government to take all possible measures to prevent genocide against members of the Rohingya. Specifically, the Court has concluded that it is necessary to indicate provisional measures while pending its final decision.

The Korean Civil Society in Solidarity with the Rohingya welcomes the measures ordered by the ICJ, and further urge the Myanmar government to admit responsibility for the massacre and sincerely act out the emergency measures.

Discrimination and persecution on the Rohingya from the Myanmar government have been continuing for the last forty years. In 2018, the UN Independent International Fact-Finding Mission on Myanmar has stated in a 444-pages report that Myanmar’s Rohingya massacre amounts to ‘war crime’, ‘genocide’ and ‘crime against humanity’.

In 2019, the UN also reported that atrocities to the 600,000 Rohingya people still left in Myanmar are lingering and their lives are at a disastrous state. These provisional measures became significant in that they acknowledged the Rohingya to still be in “serious dangers of genocide”. Moreover, this is also a stern warning from the international community to refrain from further cruelty against the most persecuted people in the world.

It is regrettable that the Myanmar government is denying the responsibility to the atrocity. Last December in the ICJ court, State Counsellor Aung San Suu Kyi has described the situation as “internal armed conflict that frequently happens in countries rich in resources, and there was no intention of ethnic cleansing”, and that independent special investigation procedure already being conducted under the Myanmar military justice system should be respected.

However, the mentioned Independent Commission of Enquiry(ICOE) has released the final report of its own investigation on January 20th that echoes Suu Kyi’s statement at the ICJ. ICOE found that while disproportionate use of physical forces by some soldiers may be considered as war crimes, there is no enough evidence to prove intent of demolishing nation, ethnicity, race, or a religious group nor conducting a genocide.

Since the world concerned with whether ICOE has conducted a fair and independent investigation in accordance with the international standard, this result was predictable. Adding on to that, the ICOE report was disclosed right before the ICJ ruled its decision of provisional measures, which show that this was just another barrier for the Myanmar government to avert from guilt.

The Myanmar government should sincerely acknowledge the ICJ’s ruling and comply with the provisional measures. This is not a matter to repulsive responses such as “there was no genocide against the Rohingya” or “some Rohingya might have exaggerated the level of mistreatment and the international judicial system does not yet have capabilities to filter out false information”.

The Myanmar government should, along with the international community, investigate the genocidal acts and make sure the ones responsible to be punished. Free and safe access to Rohingya villages located in Myanmar for investigation or humanitarian purposes should also be allowed. In addition, it is evident that the Rohingya be acknowledged as a minority group and their citizenship be restored so that the refugees, who have been suffering from all kinds of maltreatment for the last forty years due to their lack of citizenship, can voluntarily, safely and with dignity return to their homes.

Hostility, discrimination, and oppression against the Rohingya must end now. We also urge that the ROK government also, along with the international community, press the Myanmar government for its implementation of the provisional measures.