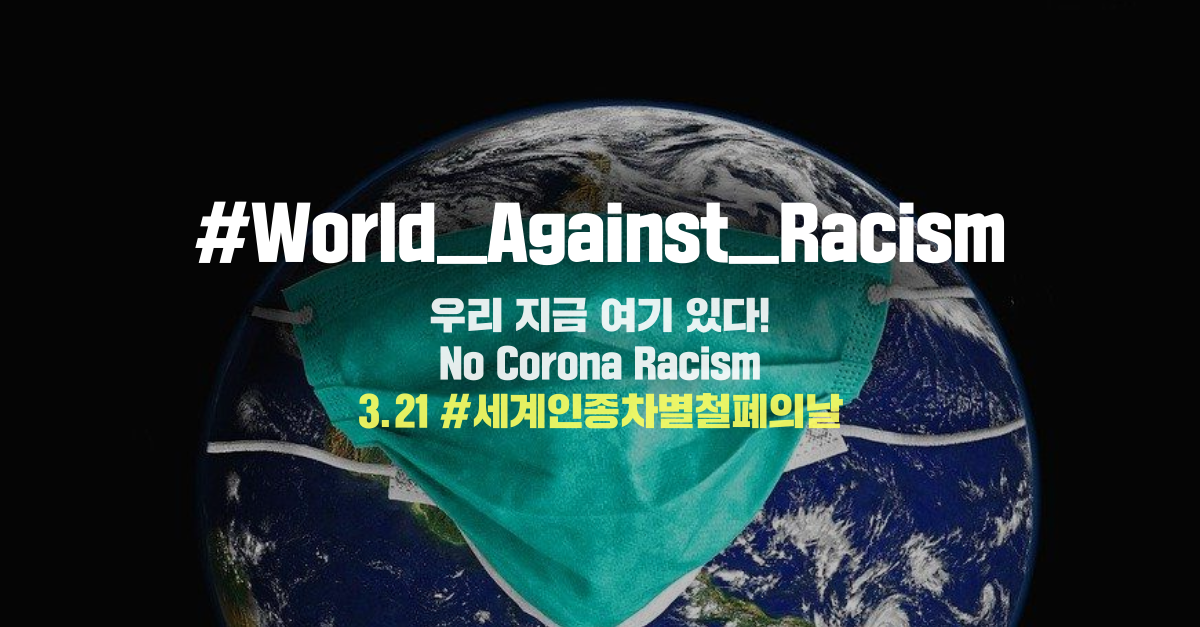 "We Are Here Now!" #World_Against_Racism

March 21 is the 54th anniversary of the United Nations International Day for the Elimination of Racial Discrimination. In commemoration of this day, there are many anti-racial discrimination rallies and marches planned to take place around the world. Due to the current coronavirus(COVID-19) situation, we replace our rally with this statement. We pray for a world without racism and send solidarity to those who are fighting against racism around the world.

More than 2.5 million immigrants live in Korea: yet they suffer from racist policies and misconceptions. Undocumented immigrants are constantly injured and killed during detention and at foreigner "shelters". The government is enforcing a misguided prejudice that paints immigrants with a "dine and dash" attitude towards national health insurance.

Immigrants are more vulnerable to the ongoing COVID-19 situation. Because there is no structural system that translates and efficiently delivers the daily updated health information, it is difficult for immigrants to stay safe and receive resources. Even the province of Daegu has refused to distribute masks to foreigners.

There have been concerns about rising prejudices and discrimination against the immigrant communities caused by the COVID-19 situation. Chinese nationals and Chinese Koreans have been victims of hate, discrimination, exclusion, and unjust layoffs. In the meantime, the ruling political party is trying to introduce the "Foreigner Accommodation Reporting System". The proposed system aims to strengthen control over the immigrant population and reinforce biases against the target community. In the West, COVID-19 has provided people with false justifications to express their explicit racism against Asian immigrants.

Last year, immigrant women set out to protest in response to two cases of racial discrimination: the case of derogatory remarks against children of multicultural families at Iksan market and the case of physical assault on Vietnamese immigrant women. The protests quickly raised social concerns regarding problems faced by immigrant women.

In 2019, the government celebrated the 15th anniversary of the Employment Permit System(EPS), congratulating itself on its work. Yet, the immigrant workers' rallies calling for the abolition of EPS exposed the true agonizing nature of those 15 years. Meanwhile, the Lulendo family, who had been detained for 287 days at Incheon International Airport, was happy to finally enter the country thanks to the support of numerous organizations, lawyers, and individuals.

This allows us to recognize how important the voices and solidarity of the people are in fighting racism. Thus, we shout together to spread this voice and solidarity!