Arroyo government and the military of the Philippines should stop political killings immediately ! 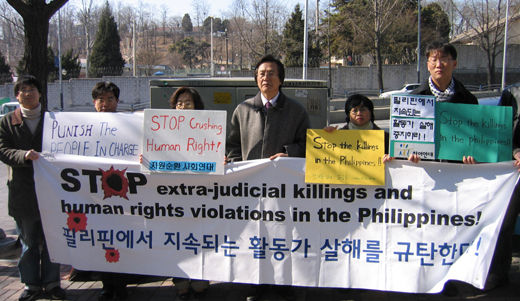 This coming February 25th is the 21st anniversary of ’the ‘People Power’ revolution, when the Philippine people brought down the regime of Dictator Marcos. We, however, regret that it is difficult to celebrate and congratulate this historical day. Since President Gloria Macapagal Arroyo took office five years ago, more than 800 people and 200 people have been killed and remain missing, respectively in the country. The people in the country are suffering more with terrible human rights violations such as killings and enforced disappearances. The situation of human rights violation in the country is more serious now than during the time of Marcos’ dictatorship. The Arroyo Government took political power in 2001 after another wave of protests swept the country in the wake of former President Estrada’s impeachment trials, commonly known as the second “People Power.” Since then she has taken little action to stop the cruel violence and even killings of laborers, farmers, religious leaders, journalists, intellectuals, civil society activists, and community leaders who bravely initiated and brought about the second People Power.

We believe that the Armed Forces of the Philippines and private armed thugs have been involved in the indiscriminate and widespread political killings. We also believe that the background of these political killings is the ongoing “war on terror” in collaboration with the US and the spread of Neo-liberalism. The reason is that most of the victims are against the US military hegemony and the spread of Neo-liberalism. In addition, proper investigation has not been conducted because they were labeled as ‘communists’ or ‘Islamic terrorists’ after their death.

The real problem is not the victims’ political ideology, but the attitude of the Philippine society, which tends to resort to violence and killing to solve social tension and conflicts, as well as the government that turns a blind eye to it.

We had already urged the Philippine government on September 25th of last year to stop political killings and to investigate perpetrators. However, in spite of appeals from international community including South Korea, the political killings and violence in the Philippines are increasing rather than decreasing. In October 3rd of last year, Bishop Ramento of the Philippine Independent Church, known as godfather of Philippine laborers, was assassinated by an unidentified gunman, shocking many people. In February 8th of this year, a leader of farmers, Dalamcio, was gunned down by an unidentified assailant in his home.

Despite the seriousness of the situation, the Philippine government has kept saying that be wait until the Melo Commission, a fact-finding commission-tasked by the government to probe the killings of media workers and activists, has finalized its investigation. The Melo Commission clearly stated that the Armed Forces of the Philippines carried out some of the killings in its report submitted to the President in January this year. However, the government has not been willing to conduct a thorough, independent investigation of the military and bring those responsible to justice.

Therefore, seeing that the political killings are continuing regardless of the investigation of Melo Commission, we can not help but think that the Melo Commission is just an instrument to avoid domestic and international criticism on the killings. For the Philippine people and progressive leaders of various sectors who live under the threat of political killings and violence, we strongly urge the Philippine government as follows: - to stop the human rights violation such as political killings and violence toward people and leaders of various sectors!

- to conduct a thorough and independent investigation of human rights violation such as political killings and violence, come up with the truth and bring those responsible to justice!

- to draw up immediate and effective measures to end political killings and violence!

- to implement the peace agreement signed with National Democratic Front in the Philippines (The NDFP) and with Muslim movement organizations.