China must place a high value on human rights rather than natural resources!

Press Conference: Urging China and UN to Support the Pro-democracy in Burma

The Denunciation for Massacre of Burmese people and the Urgent Action for Pro-Democracy Support (abbreviation: Urgent Action for Burma) had the press conference on 9 October at noon in front of the Chinese embassy and urged the China about the pro-democracy for Burma.

Among neighboring countries, China is the country that is known to have a very close relationship with the Burmese military regime. China is the representative trade country of Burma and in the meantime China supported the Burmese military regime through a close diplomatic relations. Also, China has been objecting the discussion and resolution about human rights in Burma at the international community such as the U.N. On the past January of 2007, China has exercised the veto power with Russia on the resolution of human rights in Burma that was decided by voting at the U.N. Security Council.

Currently, there is an urge from the international community that the U.N. Security Council should step forward to resolve the current incident in Burma. Especially, the international community is urging China to support the pro-democracy in Burma and not stand on the opposing side. There is a movement of boycott against the 2008 Beijing Olympic for the achievements of their goal.

Hence, the ‘Urgent Action for Burma’ also wants the U.N. Security Council to adopt the resolution to solve the current incident in Burma, wants to prevents the China’s supports on Burmese military regime and urge China to supports the pro-democracy. That was why the ‘Urgent Action for Burma’ had the news conference at the front of the Chinese embassy. 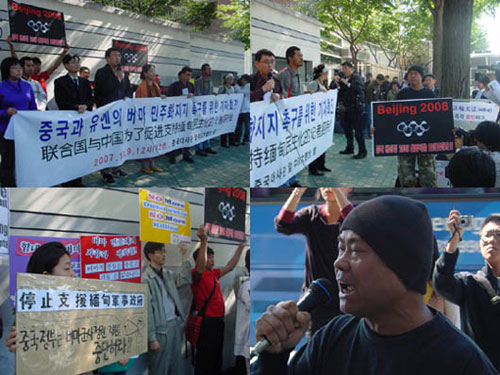