Even though the urgent matters were covered by the request from the civic groups and small business owners, the tenants are still suffering from COVID-19 being prolonged. The major reason for it is an administrative measure for the prohibition of assembly causing a burden of the rental fee for the tenants without any revenue. On October 6, PSPD and the small-middle sized merchant organizations disclosed the actual cases of the commercial tenants suffering from COVID-19 and held the press conference urging the government, the local governments, and the landlords to share the tenants’ hardship. The small business owners, who participated in the press conference, were lamenting that the landlords had increased the rental fee or had told them to leave without any rational reason. And those small business owners have been running their businesses with the loans and the rental fee being overdue. Through the press conference, PSPD demanded a reduction of the rental amount and an extension of the deferment period for the commercial buildings owned by the local governments. In addition, PSPD also demanded a specific legislation revision and an administrative measure that may facilitate the right to claim a reduction of the rental amount for the tenants.

The tenants become anxious by receiving the contents-certified mails notifying that the increase in the rental fee and maintenance fee from the landlords. However, the landlords just do not care about the claim for reducing the rental fee. The tenants argue that they even hardly imagine exercising their rights to claim a reduction of rental fee because it may make the landlords annoyed. Even if the landlords would not accept the claim, the local governments need to activate the dispute mediation committee to appropriately advise the tenants according to the economic situations and appraisal and assessment.

Why Korea has been relatively successful in quarantine against COVID-19 is thanks to the solidarity and participation of citizens trying to overcome the crisis together. The government and society need to make efforts to share the socio-economic pain derived from disease and quarantine. PSPD will continue to work with citizens who are struggling with COVID-19 and come up with countermeasures. 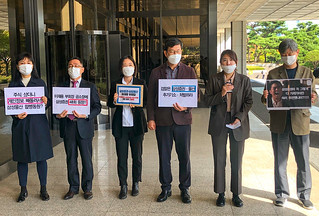 On October 15, PSPD submitted an additional complaint to the prosecution against Samsung Securities Co., Samsung C&T Corp., and vice president Lee Jaeyong. On September 1, the prosecution already charged 11 people without detention, including Lee Jaeyong and former and current executives of Samsung, in connection with the Samsung Group's illegal merger and accounting fraud case. But, PSPD’s indictment contained various criminal acts in addition to the actual criminal cases of them that were already charged.

Those the accused personnel, including Lee Jaeyong, proposed a considerable amount of profit to Ilsung Pharmaceuticals, a major shareholder of Samsung C&T, in hope of merging between Samsung C&T and Cheil Industries. They also tried to attain the votes of approval for the merger. They even promised to offer KCC, a stockholder of Cheil, a certain amount of profit while selling their own shares if KCC gives consent to the merger. What the far more surprising is that Samsung C&T conveyed its shareholders’ personal information to Samsung Securities, and Samsung Securities tried to obtain voting rights of some shareholders with the information. The personal information has been abused without any agreement of shareholders.

During the parliamentary audit the last October, the chairman, Eun Sungsoo, from the Financial Services Commission, and the director, Yoon Seokhun, from the Financial Supervisory Service, announced their plan to investigate whether Samsung Securities had violated capital market law when Samsung C&T merged with Cheil Industries in 2015. Therefore, in addition to the additional complaint against Vice Chairman Lee Jaeyong, PSPD urged the financial authorities to promptly investigate, guide, and supervise Samsung Securities that violated the Personal Information Protection Act and the Capital Market Act by participating in the merger of Samsung C&T.

PSPD also had sent an official letter to the court requesting that the public would attend Lee Jaeyong’s trial, which was held on October 22. If the spectator tickets were distributed by order of arrival, as usual, Samsung would have used the number of people to take all the tickets. Hence, the court clarified that the tickets would be impartially distributed.

This illegal merger between Samsung C&T and Cheil Industries is a crime of financial fraud, which undermines national pension and which cajoles capitalism and the financial consumers, just to seek the interest of the owner family. We will not loosen our surveillance without cease over the illegal activities of the vice president, Lee Jaeyong, and former and current executives of Samsung.

In June, PSPD reported false and exaggerated commercial ads of the telecommunications companies to the Korean Fair Trade Commission (KFTC). However, in August, KFTC announced that those advertisements would be hardly regarded as false and exaggerated ones and turned down the report. On October 7, the Minister of Science and ICT gave a shocking answer at the National Audit Office. It literally expressed that the government does not have any intention to provide a 28GHz frequency of 5G for its citizens. But, the base station of 28GHz has to be constructed in order for a movie of 2GB size to be downloaded in a second just as what the commercial advertisement has introduced.

In fact, the base stations constructed by the telecommunications companies only generate 3.5GHz frequency, and also the mobile phones being sold are only capable of receiving 3.5GHz frequency. Regardless of this situation, the telecommunications companies have spent a considerable amount of cost for commercial advertisements and promotion of 5G services that do not work well. They restricted the rights of choice by allowing the new phones to be subscribed exclusively for 5G services and by financially supporting only for 5G services. The citizens have been paying for the high cost of the 5G fee plan. It can be regarded as the Minister of Science and ICT approved that advertisements have been false or exaggerated.

In October, PSPD argued the reduction in calling plan and introduction of a universal data plan by releasing the prime cost of telecommunications. PSPD demanded that the Ministry of Science and ICT would officially take responsibility for 5G services and that conciliation of the dispute would have to be open to the public. The telecommunications services are analogous to the public goods that anyone generally utilizes. PSPD will continuously work on posing a problem regarding poor services of 5G and make a calling plan of 5G will be adjusted according to its level of quality. 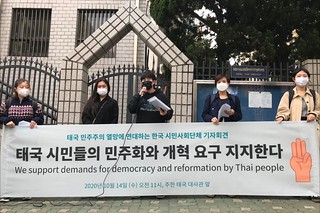 On October 14, twenty civic society organizations, including PSPD, held the press conference in front of the Embassy of Thailand and sent support and solidarity to Thai citizens’ enthusiasm toward democratization. This press conference was also a reply to the message of Thai youth appealing support through SNS saying, “Just like the Democratic Uprising of South Korea in 1987, we will root out dictatorship from Thailand.”

In February of this year, the Constitutional Court of Thailand dispersed the Future Forward Party that had become the third party from the last general election, and therefore, the anti-government protest started with the youth as a pivot. The protest got expanded, on September 19, 100,000 Bangkok citizens rallied downtown. The citizens were extremely furious about the royal family who had been enjoying overseas trips to Europe despite the fact that its people were suffering from the pandemic. Also, they were enraged by the government that had suppressed freedom of expression and retrogressed democracy and by the Establishment’s tyranny.

The protestors continued on a massive rally at the anniversary of the democratization revolution, on October 14. As the citizens’ enthusiasm toward democratization, the Thai government issued a contingency action such as banning the assembly of more than five people. The government strongly took action by hauling the protestors in jail and by using a water cannon.

Like what the citizens of South Korea holding up the candle lights shouted, “All powers stem from the citizens,” Thai citizens also cry, “Thailand does not belong to the King.” From the heart of the citizens in Asia being in unity, we hope you pay attention to what is going on in Thailand.

On October 15, an issues report titled <Rental Business Registration System – too much preferential treatment for the landlords and insufficient protection for the tenants>, pointing out the problem of excess tax benefit, was published.

The Housing Rental Business Registration System introduced in 1994 provides tax incentives to the landlords instead of giving them the obligation as the landlords in order for the tenants to have residence stability. However, from the Lee Myung-bak administration to the current administration, this system’s tax benefit has become excessive to encourage registration of rental housing. It turned out to deviate from its original purpose and instigated speculation and provided a loophole for tax evasion.

As this system was pointed out as the main reason for boosting speculative demand and rising real estate prices, the current government implemented a policy to reduce tax incentives for rental companies in July. However, this decision applies only to new registrants, and the benefits of the existing rental business remain. In addition, there is an inadequate policy that excludes those who own villas and multi-family homes as well.

According to the results of the PSPD's analysis of actual cases, it was found that registered rental companies receive a reduction of more than 90% of the total real estate tax and capital gains tax payment amount. With the enforcement of the Housing Lease Protection Act, guaranteed right to request contract renewal and 5% upper limit on rent, which were the duties of the rental business owner, have been applied to general landlords. Therefore, excessive tax benefit merely applied to the registered rental business owner is not fair.

PSPD urged the government and the National Assembly to immediately abolish excessive tax benefits from the rental business registration system through an issue report. And, we asked them to strengthen supervision over obligations of the landlords.

The Intelligence Police – It Has to Be Dissolved, Which Is an Innovation. 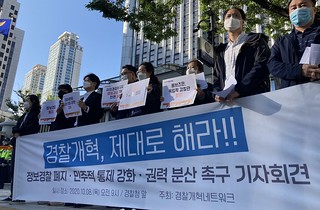 These are what intelligence police did during the administrations of Lee Myung-bak and Park Geun-Hye. Three heads of the government's police officers of the former administration were brought to trial on charges of intervening in politics by using intelligence police organizations. The intelligence police have not been abolished by the police organization, which has a system that is as strict as the prosecution. Therefore, it was pointed out that it would be dangerous to adjust the right to investigate the speculum. Besides, the anti-aircraft investigation rights of the National Intelligence Service will also be transferred to the police, but police reforms that decentralize authority and enable democratic control are too slow.

In 2019, PSPD revealed that the intelligence police had produced 1,000 policy data for reporting to the Blue House and the Prime Minister's Office. However, the management and supervision of how these materials were collected and produced, where they were applied, and how they were used, are not properly conducted.

The government clarified its intention to strengthen penalties if police intelligence activities intervene in politics. However, as long as the intelligence police exist, any time depending on the government, police corruption during the Lee Myung-bak and Park Geunhye governments may reappear. The intelligence police ought to be dissolved and the corrupted police have to be eliminated so that the police may focus on fulfilling its fundamental duty of investigating and securing the public.