Another Step Towards Public Health Care! With the Late Jung Yuyeop

Do you remember Jung Yuyeop, a student of seventeen who died when COVID19 rapidly spread in Daegu, last year in March? A number of hospitals turned him down because he was suspected of the disease, although his fever was over 40 degrees celsius, which soon resulted in his death from acute pneumonia. His father marched 370km on foot from Gyeongsan, Gyeongbuk to the Blue House in Seoul, to discover the cause for Yuyeop’s death that was uncared for and to ask the government to deal with the medical blank and increase public hospitals. Many civilians, PSPD included, walked with Yuyeop’s father to the Blue House with white chrysanthemums and public hospital miniatures made from paper, as this was the first year of memorial for his death. Even though gaps in medical services and the lack of sickbeds were revealed to be serious nationwide, the government and the National Assembly are evading the inquiry to manage it, pointing out preliminary assessment as one of their reasons. We sincerely hope the government would step up any instant for a responsible investigation in the medical gaps from COVID-19 and strengthen the public sector of medical services.

Stop feasting on your public post! Pass The Five Bills

Korean society was a fiasco in March due to the news of speculation of Korea Land and Housing Corporation (LH) employees. Huge reactions followed a press conference on March 2, held by PSPD and Minbyun, the Lawyers for a Democratic Society. After that, the government announced the results from two joint investigations, the National Investigation Headquarters of the National Police Agency dived in and formed a special investigative task force, and the opposing parties are all competing to come up with preventive bills. PSPD organized bills which we have been preparing that could deal with conflict of interests between the public officials and prevent speculation. We announced “The Five Bills to Prevent Conflicts of interest and Speculation of Public Servants” on March 23. 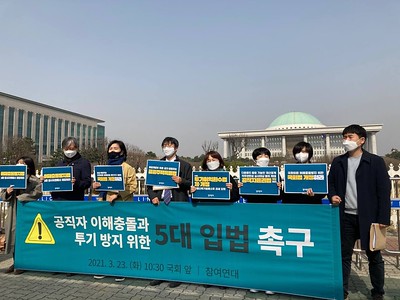 This speculation of LH employees using unrevealed information was a foreseeable disaster, considering how we lack control mechanisms to prevent conflicts of interests. Before this issue was known, companies related to Rep. Park Deok-heum were revealed to have received orders from the very organizations that he was to audit, and the former Vice Land Minister Park Sun-ho was confirmed to have held back reporting his land that was designated to be part of new urban development plans. We will work hard to see proper countermeasures.

Democracy to Myanmar! “Everything will be OK”

Kyal Sin, a 19-year-old youth, was shot dead by the army policy of Myanmar last March 3. The phrase that was emblazoned on her shirt still resonates. Ever since the Myanmar army coup took place, the situations there are only getting more serious, and indiscriminate use of firearms and suppression against the peaceful protestors are escalating the death tolls.

Even though we are located far away, the hearts of the Korean civilians are with them as we support the disobedience act of Myanmar civilians who are on the street trying to defend democracy. Around a thousand civilians here joined in the campaign to show our solidarity with them, a movement which was suggested by Korean civic society groups including PSPD, and other movements to stand with the Myanmar civilians are happening all across the country.

We also shout out a dire call to change to POSCO, Lotte Hotel, and other Korean corporations who are conducting investigations and business connected with the military authorities of Myanmar. Especially the resource development projects including gas are the top business that enriches the Myanmar military. Korean corporations should stop their investments related to the military authorities, and the government should also take necessary actions according to international standards such as the United Nations Guiding Principles on Business and Human Rights. PSPD will be with the persistent and rightful resistance of the Myanmar civilians towards democracy until the very end. 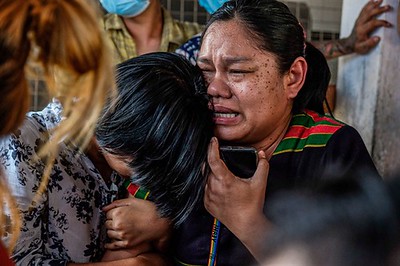 “The largest increase and longest term of validity in history, the worst yearly increase rate and disastrous defense burden share agreement between the US and ROK” is how PSPD assesses the results from the eleventh Security Consultative Meeting settled on March 10. This round of agreements increased the burden-sharing by 13.9% from 1.389 trillion Korean won in 2019, which is the highest record in history. The share has also been agreed to rise on a yearly basis until 2025, matching the total Korean defense budget expansion. According to what has been agreed, the total defense burden share will reach 1.5 trillion won in 2025, which amounts to the 50% increase the Trump administration previously demanded.

Moreover, raising the share despite the current situation of unspent budgets keep being carried over seems not unrelated to Washington’s reinforcement of its Indo-Pacific strategy against China. This is a waste of tax money which even asserts a negative influence on Northeast Asia’s regional peace. Now the ball is in the National Assembly’s court. PSPD will actively ask the Assembly to reject this round of burden-sharing agreement.

60 Years of Illegal Surveillance - Let’s Put an End to the Dark History of the National Intelligence Service!

Reveal of information opened how the National Intelligence Service (NIS) illegally surveilled a wide range of civilians during the Lee Myung-bak era. This was from ‘Give me my files’ information disclosure movement by the victims of NIS’s illegal surveillance in 2017. The inspection documents included details of how to formulate public opinion towards being perceived as groups merely opposing for the sake of blanket opposition, and weaken the voices of the main people who were against the Four Major rivers refurbishment project by finding their corruption. It also laid out how to manage the notable twenty people leading the opposition to the project by assigning them each an official.

The annex of <Four Major Rivers Project Opposite Activity Trends and Considerations>, part of what was revealed through environmental groups’ information disclosure claims, listed PSPD. It contains basic information and our trends of opposing the project, but this cannot be all they have done. As we have been carrying out opposing movements against American beef imports, voiced for cutting college tuition in half, asked for free school meals, and probe the Sewol ferry incident, there should be more that was under surveillance. In March, seven civil society group members including Taeho Lee, the secretary-general of PSPD in 2011-2015, asked for information disclosure on the issue to NIS. Once the facts of the damage are confirmed, we will hold the state responsible. The National Assembly should hurry and legislate a special law to find the truth of NIS’s destruction of constitutional orders.

Now that the market globally slowed down due to the COVID-19 pandemic, the call for strengthening the social safety net is more heated than ever. In the middle of the current crisis, alternative distribution methods other than traditional social insurance are also coming to the table. The Institute for a Participatory Society Center hosted a series of forums on basic income, underlying basic assets, participation basic income, and other topics that have become an issue. We closely examined whether these alternative ways of distribution could alleviate the inequality and polarization that are being accelerated by COVID-19. Three forums are available for watch on the PSPD Youtube channel. ▶Youtu.be/OP3v6fgm42M 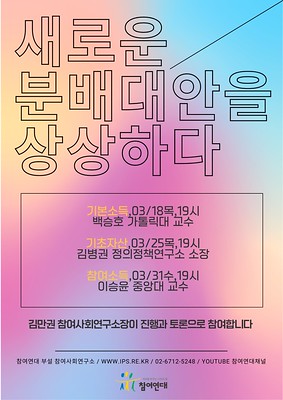