For the Peace Era of Korean Peninsula, seek what civil society has to prepare for 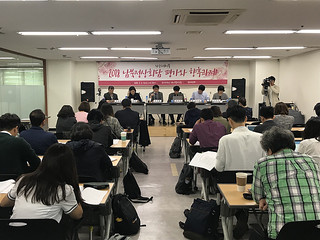 Center for Peace and Disarmament of PSPD organized a roundtable <Evaluation of 2018 Inter-Korean summit and following tasks> on 2 May to assess 4.27 Inter-Korean summit and look out on North Korea-US summit. Civil Peace Forum in which PSPD actively participates also held a forum <Conversion of Korean Peninsula and tasks of civil movement> on 15 May in order to discuss and seek what have to be done for a new chapter of Korean Peninsula in terms of human rights, ecology and environment, peace and reunification. PSPD urged to stop ‘Max Thunder’ ROK-US joint air force exercise because it is totally against Panmunjom Declaration which agreed to completely cease all kinds of hostile acts. For the purpose of raising the issue that THAAD can’t co-exist with Peace era, PSPD held a rally protesting against THAAD deployment on 9 May together with Seongju and Kimcheon residents in front of National Policy Agency and Blue House, and watched THAAD deployment site in Soseong-li in Seongju with local residents. Preparation has to start to suggest milestone for the way to the peace road.

Holds Voters’ Meeting to change my life with local election 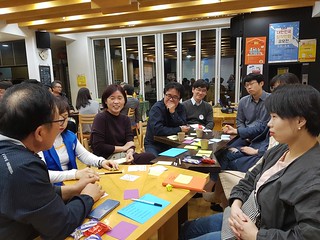 Center for Legislative Watch of PSPD is holding voters’ meeting to change my life with local election and the first meetings were held in Chuncheon on 3 and 10 May. The occasion provided the time to discuss how to cast seven votes in coming local election and participants learned about the Public Official Election Act. Following meetings are scheduled on 18 June in Chuncheon, 7 and 14 June in Seoul, 9 and 19 June in Daegu. Members! Please come and join. 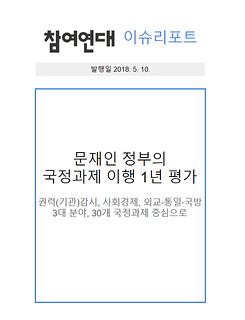 It has been a year since Moon Jae-in administration started its sailing. PSPD and MINBYUN-Lawyers for a Democratic Society jointed organized a conference <Moon administration, how far has it come and where to go?> on 3 May to evaluate the first year of Moon administration. Focusing on 100 national tasks announced by the government, evaluation and discussion dealt with three major areas ▲South and North Korea relation and the Peace in Korean Peninsula ▲Eradication of deep-rooted evils, authority reform and constitutional revision ▲Fair and win-win Social and economic policies. It was a general conference held from 10:00am to 06:00pm so that many experts and citizens have participated and looked back the last one year.

Besides it, PSPD has assessed 30 from 100 national tasks which are related to reform of authorities, anti-corruption, society and economic issues and the peace in Korean Peninsula, and presented an issue report on 10 May 『Assessment of Moon Jae-in administration how many National tasks have been implemented』. Even though Moon administration has received supports from the people in terms of eradicating deep-rooted evils, communication with the people and inter-Korean summit, there are still a lot of works to be done. Direction to reform prosecutors and National Intelligence Service seems positive but there hasn’t been any specific and systematic outcome produced. Social and Economic issues such as Chaebol reform and job creation have not been implemented much. Legislation would not be easy because opposition party does not cooperate but it is expected to mobilize all political ability to make a law by increasing intensity and speed of reform. 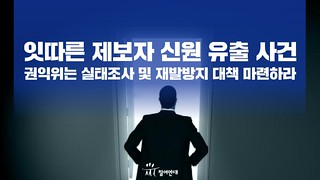 Leak of personal information of whistle blowers for public interest and retaliation acts against them are not new and only within this May, a secretary at Ministry of Education and a supervisor at Ministry of Labor and Employment leaked personal information. Center for whistle blower support of PSPD regards it as very serious violation of security and protection of whistle blowers so that it has submitted a letter of opinion to Anti-Corruption & Civil Rights Commission demanding to investigate the situation and make prevention measures. Furthermore, another letter of opinion was sent requesting to apologize to Hwang Ha-il, Yoon Yoon-kwon, Hwang Hyo-yeol, Seok Myung-han and Cho (deceased) who have received retaliatory punishment for whistleblowing safety problems of KORAIL railways. The letter also asks to prepare for adequate recovery measure and compensation for their pains and disadvantages. On 23 May, another letter of opinion asking to protect a whistleblower who exposed corrupted acts of Blood Bank Jeonbuk branch to the Red Cross was submitted to Court. PSPD will keep trying to stop acts of giving disadvantages to whistle blowers. 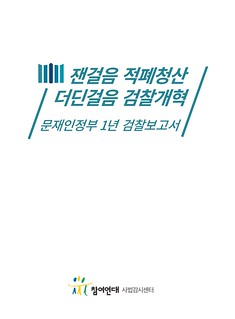 Center for Judicial Watch of PSPD has carried out movement to establish special investigation agency for high ranking public officers and published a report on prosecutors on 15 May around having the first year of Moon administration. It is the 10th annual report and has the subtitle of 『Eradicating deep-rooted evils and reforming prosecutors do not make progress』

Prosecutors have actively investigated illegal acts and corruptions conducted during Park Geun-hye and Lee Myung-bak administration for the last one year but they could not operate internal illegalities and corruptions. Reforming prosecutors is the presidential promise of Moon Jae-in government and one of the national tasks. However, establishing special investigation agency has not been dealt properly at the National Assembly so that system hasn’t set up yet. On the other hand, PSPD expressed the stance that the agency has to be established as soon as possible by commenting that prosecutors do not handle internal investigations fairly such as external pressure given on Kangwon Land recruitment corruption investigation and internal sexual assault. 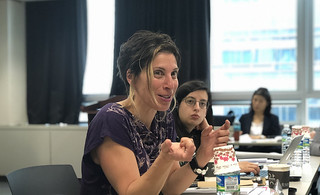 UN Special Rapporteur on adequate housing, Ms. Leilani Farha, has officially visited Korea and carried out study on Korea’s housing status from 14 May. PSPD has joined in the study through ‘the Korean NGOs for realization of Housing Rights’ and guided to visit areas for street homeless, housing poverty, forced displacement and migrants. It also played a role to deliver opinions of people excluded from ‘Housing for all’. UN Special Rapporteur held an official press conference on 23 May and expressed deep concerns stating that status of housing in Korea does not comply with international human rights standard. As PSPD has argued for long, UN recommended Korean Government to have measures of acknowledging the tenant’s right to claim for renewal of a contract in order to activate upper limit of rental fee, mandatory registration of all private lease houses and solution to improve the right to possession of tenants.

Having the Local Election around the corner, PSPD proposes and demands to adopt ‘Good policy’ 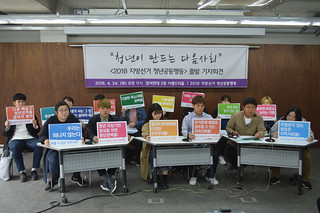 An issue report 『’17 good policies’ proposed for 2018 Local Election』 was released on 3 May, a collection of policies which political parties and candidates for 6.13 local election have to work for. In order to resolve complicated social and economic matters, it is essential for local governments to actively play a role. ’17 good policies’ include housing policy to improve the life of residences, welfare, protection of small and medium business owners, labor-friendly local administration, supporting youth related social economic policy and transparent local governments. Solidarity of Participatory Autonomy Region for which PSPD looks after secretariat office, also proposed measures to reform local governments and local councils. It is publishing a series 『How local government is expected to change』 in cooperation with Ohmynews from 11 May and seven articles in total will be released by PSPD and other organizations before the local election giving suggestions how to change local governments and local councils.

The youth is moving, too. Youth PSPD has organized <Joint Youth Action for 2018 Local Election> on 24 April with other youth organizations and presented joint policy proposals on 17 May in a form of card news. The first proposals are ‘Establishment of youth allowance system including non-monetary support’, ‘Adoption of gap year for the youth to secure the time to search for career’ and ‘Reduce liability by reducing debt and social financial support’. Support for youth housing and promoting co-resident, increasing spaces for the youth, and support communities and youth activities, expanding the right to health by providing youth health check are demanded in the second proposals. Candidates for local governors and council members are expected to listen to these voices.

Raises problems and confronts with Samsung and Hyundai 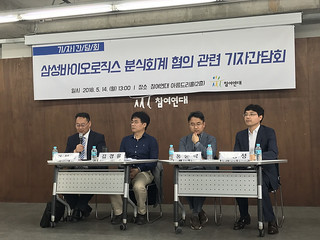 The core point of Samsung C&T-Jeil Industry merger is management succession to Lee Jae-yong. Then, how is it related to Samsung Biologics? Since PSPD has dealt with this matter head to head including making a request of audit and inspection of Samsung Biologics to the Financial Supervisory Service (FSS) last year, it held a press forum on 14 May to organize main issues regarding allegations on window dressing of Samsung Biologics and to refute Samsung’s explanations and arguments. It examined relationship between window dressing of Samsung Biologics and Samsung C&T-Jeil Industry merger and discussed how to guarantee fairness of FSS’s decision, and reports and questions of the press have followed. There is no doubt on the FSS’s decision that violation of accounting process was found. Nevertheless, PSPD keeps urging FSS to make a reasonable final decision and has sent a letter of questions to Samsung Biologics and Biogen in order to make sure that Samsung doesn’t get away this time.

Concerning Hyundai group, PSPD has raised questions in respect to restructuring shareholding structure of Hyundai Motors Group last March and concentrated on making it an issue during this month. It has presented a report questioning adequacy of spin off and merger ratio of Hyundai Glovis and Hyundai Mobis, and released grounds to refute standpoint of Hyundai Motors. The discussion was held on 16 May to diagnose problems with their plan for restructuring Hyundai Motor Group shareholding structure, assess adequacy and suggest improvement measure. At the end of May, Hyundai Motor Group accepted problems indicated by PSPD and civil society, and decided to withdraw the plan previously announced.

Court rules to disclose special activity expenses of lawmakers. Constitutional revision did not happen in June 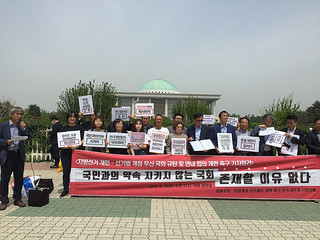 PSPD has earned another victory at the Supreme Court and it is the second time this year. After winning the lawsuit for disclosing operating cost of mobile communication service, the Supreme Court ruled to disclose special activity expenses of lawmakers supporting PSPD and rejecting secretariat office of the National Assembly’s argument that disclosing the expenses would shrink lawmakers’ activities. While the National Assembly is ignoring public welfare, distrust of the people is increasing because even how the national budget is managed is not transparent. PSPD will pay attention and watch how and where special activity budget is spent which lawmakers have used like their pocket money.

Revising the National Referendum Act failed to happen in April and accordingly attempt to vote for constitutional revision at the local election in June also became not possible. The National Assembly has promised constitutional revision but did not take an initiative to prepare a bill and reach an agreement. However, possibility still remains. PSPD and ‘National Network for people led Constitutional Revision’ in which PSPD actively participates and 961 social organizations nationwide held a press conference in front of the National Assembly on 15 May denouncing the failure of passing the constitutional revision in June and urging to do it by the end of the year. Both leading and opposition party have to propose their own revised bill of constitution and the Public Official Election Act together with detailed procedure and measures to discuss, and reach an agreement by the end of the year.

Patience of the people has reached the limit in May. Politic is the only key to solve so many contradictions and problems but that is not functioning properly. The time to correct broken politic is coming. We can prove that our votes can make a change.