“We met on Mt. Kumgang”, North and South Korea Welcome in the New Year Together 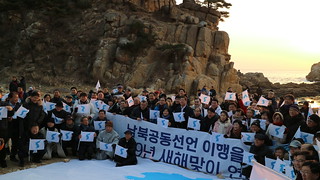 Civilians from both North and South Korea recommenced visits to Mt. Kumgang together. Civilian representatives from the two Koreas, overseas organizations and various civil society organizations, such as the South Korea Operation Committee for 6.15 Joint Declaration, Korean Council for Reconciliation and Cooperation, Civil Society Organizations Network in Korea, Korea Alliance for Progressive Movements, and the Korean Conference of Religion for Peace, joined together for the 2019 New Year’s Conference to Carry Out the Joint Declaration, gathered on Mt. Kumgang from February 12 to 13.

It had been 10 years since the last meeting of civilian representatives in June 2008. PSPD members Lee Tae-ho, Chair of the Policy Committee, and Hwang Soo-young, Manager of the Peace and International Team, joined the meeting representing the Civil Society Organizations Network in Korea and the Citizen’s Peace Forum respectively. Around 400 participants showed their support for the newly developing inter-Korean relations and gathered to push for the implementation of the Panmunjom Declaration and the Pyongyang Joint Declaration. We believe that frequent and diverse inter-Korean activities in the civilian sector will serve as a catalyst for better inter-Korean relations and peace on the peninsula. 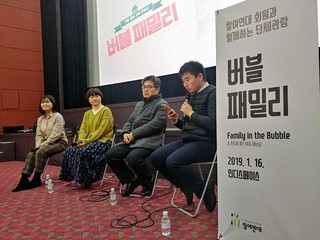 The Center for the Improvement of People’s Livelihoods kicked off with a public viewing of the documentary film, Family in the Bubble, on January 16. Family in the Bubble is a self-portrait documentary about a family where the parents lost everything on the real-estate market but are still living in a fantasy that they will eventually strike it rich. Meanwhile the daughter, in her 20s, struggles to cover her rent and student loans. The documentary shows the reality of real estate bubbles.

The Center put out a statement at the end of January regarding the Ministry of Land, Infrastructure and Transport decision to raise publicly listed prices on individual housing by only 9.13%, with the Center demanded that the listed prices be raised close to 80 to 90% of the actual market prices to restore tax equality.

Last year’s much loved lecture “Knowledge on housing that may become valuable or not” was reborn as a featured article, in partnership with Ohmynews, to share great tips for tenants. Four articles had been published by the end of February including “Afraid of not getting your deposit back from your landlord? Just remember these 4 things.” A book talk with Professor Jeon Kang-soo, the author of The Economic history of the Real estate Republic was held at Café Tongin on February 14. On February 18, “A dialogue with tenants in reconstruction housing development areas?” took place with members of the Seoul City Planning and Management Committee. We hope that the Center for the Improvement of People’s Livelihoods will provide hope for those who need residential stability.

Marching on the National Assembly for Political and Governmental Reform 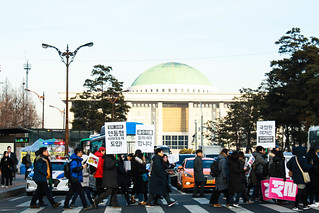 Around 60 activities from PSPD, Minbyun and YMCA Korea gathered early on the morning of February 18 in front of the Korea Liberty Party headquarters. We were there to condemn the party for hindering the passage of reform bills that the public demands, such as a bill to establish an Investigation Agency for High-ranking Public Officials, and a bill to reign in the powers of the National Intelligence Service.

The march made a stop at the Democratic Party of Korea headquarters to urge the governing party to submit a proper political reform bill, rather than being so hesitant and so preoccupied with the next elections. The journey passed by the offices of the Bareunmirae Party and made a final stop in front of the National Assembly to hold a press briefing to urge the National Assembly to resume an extraordinary parliamentary session scheduled for February and pass the political reform bills in a swift manner. The next morning we started daily marches from Yeouido station to National Assembly Gate.

On January 24, the appellate court passed its ruling on a lawsuit filed by 7 PSPD against the Korea government, regarding police attempts to stop their one-man protests in 2016. The appellate court upheld a previous ruling that the government pay damages, ranging from 500,000 KRW to 1.5 million KRW, in compensation to the complainants. The court again ruled in favor of the complainants that their freedom of speech was violated when one-man protests were stopped due to the use of the phrase “President’s resignation” on the picket signs. Back then, the police prevented the one-man protests, because the protest was demanding the resignation of ex-president Park Geun-hye, even though other types of one man protests were allowed. It was an arbitrary action by the police to appease their superiors. We expect that this ruling sends a clear message to the police and puts a stop to illegal police activities that violate freedom of speech. Moreover, actions against the police leadership who made such decisions will be undertaken. 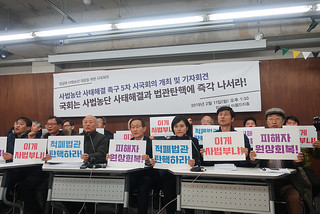 The fifth committee meeting was held on February 8 to push the National Assembly for immediate action to resolve this scandal and move forward with impeachment. A candlelight gathering was held on the stairs of the Sejong Culture Center in Gwanghwamun on February 15 to demand impeachment of these judges, and a signature campaign will continue to get citizens’ support.

Meanwhile, the Justice Monitoring Center won a court ruling against the court administration’s decision to not disclose documents related to corruption. The ruling represents an important example of judicial independence. PSPD will continue to do its best to ensure that the truth of the judiciary scandal is revealed, those judges responsible are impeached, and bills concerning democratic control of the judicial system are put in place in the future.

The floor leaders of five political parties from both sides of the aisle agreed on December 15, 2018, that they would prepare an electoral system reform bill that included proportional representation, by the end of January 2019. However, both the Liberty Korea Party and the Democratic Party raised their voices in dissent and wasted much of January on political fighting, instead of working towards progress on political reform bills.

The following day, on January 29, a letter on the electoral reform was delivered to every single representative of the National Assembly, urging the speaker, floor leaders of all parties, and members of the Political Reform Committee to restart the talks. On day three, a candlelight cultural festival was held to continue the cause. The 72-hour emergency action concluded with a press briefing at 2 pm, on January 31, on the stairs of National Assembly main building. PSPD will not take a break until political reform that reflects the will of the people is achieved.

The Center for Economic and Financial Justice, alongside the Korean Air Pilots Union and the Korean Air workers union, paid a visit to the fund management committee of the National Pension Service (NPS) to hold a picket-protest demanding the ‘Normalization of Korean Air by exercising NPS’s shareholder rights’ on January 16 and February 1.

Ever since the Ministry of Health and Welfare introduced a stewardship code (Principles on institutional investors) to NPS in July 2018, Hanjin Group, a Korean conglomerate which operates Korean Air, was identified as one of the businesses which NPS should actively apply the stewardship code to. Chairman Cho Yang-ho, of Hanjin group, has been accused of embezzlement and abuse of power which enabled him personally profit from company assets, damaging the company’s value as a result. This should disqualify him as a leader of this business. Specifically, PSPD urged NPS to exercise its voting rights to oppose the reappointment of chairman Cho as a member of the board, at the shareholders’ meeting. In the end, NPS exercised its shareholder rights over Hanjin KAL only, and voted for an amendment of articles of association with ‘minimum’ rights exercised to intervene in the company’s management.

Even though the active application of the stewardship code to Korean Air did not materialize, this is a remarkable outcome considering that it showed that a stewardship code will be applied to problematic corporations.  A good beginning is half the battle.  ‘The Citizen’s movement for the normalization of Korean Air by exercising NPS’s shareholder rights’ will be leading the way to bring a solution to the issues faced at Korean Air.

The Center for Tax Reform published an analysis report on changes in the latest publicly listed prices of real estate on January 17. After reviewing price changes from the year 2006 to July 2018, our findings show that only 80.9% of the actual market price increase was reflected in the latest public figures.