Calling for support and cooperation for the peace process on the Korean peninsula from the United Nations and the international community.

The second US-North Korea summit in Hanoi at the end of February failed to reach an agreement and the recent progress towards peace on the Korean peninsula seems to have stalled. However, we cannot let such progress to be halted so easily. Support from the international community, including the United Nations Security Council, is critical in re-opening US-North Korea negotiations.

On March 18, the Center for Peace and Disarmament at PSPD sent an open letter entitled, “The Peace Process on the Korean Peninsula Must Go On”, which was prepared together with 55 other domestic civil society groups. The letter was sent to members of the UN Security Council, the UN Resolution 1718 Committee, the UN delegations from South Korea, North Korea, and Japan, international media and global NGOs. Through this letter, the Center for Peace and Disarmament requested that the UN Security Council member states express their support for reopening talks between the US and North Korea and restarting negotiations for peace on the peninsula. At the same time, the Center appealed to the UN 1718 Committee: the Security Council committee established pursuant to resolution 1718, related to North Korea sanctions and the lifting of all restrictions on humanitarian aid. The center also emphasized the importance of discussing all issues in a comprehensive manner, as the denuclearization of the Korean peninsula is related to normalization of US-North Korea relations as well as a peace treaty.

Since the inter-Korean summit last year, the two Koreas have stopped any hostile activities against each other and Korea has experienced the most peaceful period since the Korean Armistice agreement was signed. We cannot afford to go back to the past situation of military tension and the risk of nuclear war. PSPD will continue its international campaigns until peace on the Korean peninsula is realized.

Withdraw the approval of the Jeju for-profit hospital and turn it into a public facility.

When the deadline was missed on March 4, a press conference was held in front of the Blue House demanding the Moon Administration and Governor Won, Hee-ryong, annul the approval of the for-profit hospital and convert it to a public hospital. On March 13, after an analysis of the 400 page long business plan for the hospital, as well as information revealed by the Jeju provincial government, PSPD raised the issue that the Greenland business plan clearly states that it will service ‘foreign patients’ only. It also states that the “filing of an administrative lawsuit claiming that it is illegal to ban treating local patients is not justified.”

Another finding showed that Greenland’s business plan included a memorandum that “a for-profit hospital network in China or Japan, which a Korean national or a Korean medical institution is involved with, will take charge of the operation of Greenland hospital in Jeju.” This violated the provincial ordinance prohibiting indirect investment by domestic medical services. PSPD urged the cancellation of the operation license, as well as the revocation of the business plan’s approval, based on these findings. Our campaign to stop for-profit hospitals that will undermine public medical services and national health care will continue. 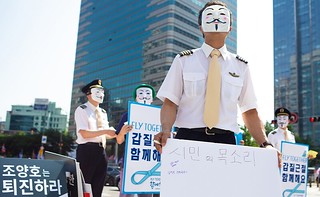 The Center for Economic and Financial Justice announced a campaign on March 5 opposing the reappointment of Chairman Cho Yang-ho as a board member at Korean Air, prior to the shareholder’s meeting scheduled for March 27. Right after the annual shareholder’s meeting schedule was announced, PSPD, MINBYUN and Attorney Lee Sang-hoon, a member of the Council of Expertise for the National Pension Trust, signed up as proxy with the Financial Supervisory Service and formally started taking power of attorney and voting instructions from shareholders.

A request to vote against the reappointment of Cho as in-house board member, was sent to both local and foreign investors including the Korean National Pension Service (11 million shares), the Korea Teachers’ Pension fund (270,000 shares) and the Korean Government Employee Pension Service (18,000 shares). A local proxy adviser Sustainvest, as well as the world’s largest proxy adviser, ISS (Institutional Shareholder Services), recommended opposition to the reappointment of Cho as a board member.

The company even pressured employees to hand over their power of attorney and voting rights. PSPD held a press briefing with the Korean Air Pilots’ Union and the Korean Air Union calling for an investigation by the prosecutor’s office. Support has come in from both domestic and foreign shareholders. Some such shareholders mentioned that they had never exercised their minority shareholder rights until they got this chance thanks to PSPD. Our work will go on until board meetings fulfill their role as supervisors of company management, rather than a mere vehicle for furthering the interests of the family owners.

Urging the establishment of an Investigation Agency for high-ranking public officials to investigate prosecutors and high-ranking police officers. 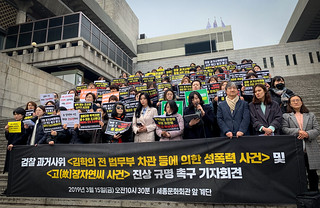 The ‘Burning Sun Club’ scandal revealed evidence of close relations between alleged sex criminals and the police. The re-opening of investigations by a special panel at the Justice Ministry into allegations against former Vice Justice Minister Kim Hak-ui in 2013, and the death of Jang Ja-yeon in 2009, shed light on alleged sexual violence by people in authority.

There is cause for concern regarding the re-investigation as it will again be handled by the police, who have come under scrutiny for corruption, and the prosecutor’s office, who manipulated the previous investigations. An investigation agency for high-ranking public officials, if established, would allow an independent investigation of either the National Police Agency Commissioner or the former Vice Justice Minister. This is why the establishment of such an investigative agency cannot be postponed further.

Lawmakers, however, have proven unable to make progress on legislation, despite civil society groups and almost 80% of the public demanding such the establishment of such an agency. The Liberty Korea Party is causing a legislative bottleneck due to its firm opposition to the legislation, while Bareun Mirae party, which supports such an agency, has caused a legislative roadblock with its demand that such an agency have investigative powers, but not the power to indict criminal suspects. With this troubling development, the proper establishment of an investigative agency may suffer a setback. Establishment of such an agency has been on PSPD’s reform agenda for 20 years. The situation at the National Assembly is chaotic, but our efforts to put pressure on lawmakers, with citizen’s support, will continue until a proper investigative body is established.

The people of Korea speak of national pension reform.

The National Pension Reform Special Committee for securing retirement benefits at the Economic, Social and Labor Council, an advisory body to the President, has been discussing the matter of pension reform for over 3 months, ever since the national pension reform proposal was announced by the administration last December. Once their final recommendation is ready and handed over to the National Assembly, the process of drafting a bill will begin. On March 13, the Committee for Social Welfare at PSPD co-hosted a large discussion session with civil society groups, labor unions and lawmakers, inviting all stakeholders, such as workplace-based insured persons, individually insured persons, beneficiaries, non-beneficiaries, youth, women, senior citizens, and irregular workers to hear what people want from national pension reform. It was pointed out that some irregular workers and minimum wage workers did not get to even claim their benefits as their employers did not pay their contribution. Among small private business owners, some claimed that the 50% contribution rate, which applies the same to big corporations, is unfair as small businesses already struggle with rents and wages. This large discussion session was meaningful as beneficiaries of the national pension offered their opinions and demands. The Committee for Social Welfare will continue to speak up so the national pension system plays the right role in ensuring an income stream for all senior citizens.

It is a demand from the people of Korea. Lawmakers must make a resolution on electoral reform. 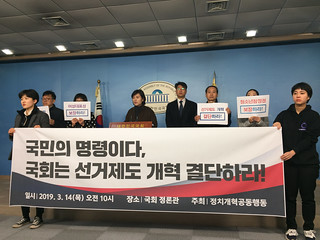 “Joint Action for Political Reform,” which PSPD is part of, conducted a full survey from the end of February with each and every member of the National Assembly about their stance on proportional representation. The aim was to encourage the completion of political reform before March 15, as the draft bill to redraw electoral precincts for the 21st National Assembly election will have to be submitted by then. Across the country civil society organizations phoned lawmakers in their regions and paid visits to urge an answer.

Replies from lawmakers were shared online real-time, and simultaneously a campaign continued to send a protest email to those who ignored the survey or were against political reform, resulting in the support of over 1,800 people. Only 57 lawmakers replied due to noncooperation from the two major parties, but the campaign proved again that there is a demand for electoral reform from the people.

While four parties are discussing fast-tracking the reform bill, the Liberty Korea party is firmly against the introduction of any changes. We will not let all the hard work be in vain due to the vested interests of certain parties.