We can’t stand it anymore! The complete inaction of the National Assembly

June’s provisional session of the National Assembly had only commenced on June 20 -- 20 days late. The opening of the session was very unproductive due to the Korea Liberty Party’s boycott, which caused a delay in the assembly working on bills and reforms that would help the public. Additionally, the National Assembly didn’t make any progress redrawing the electoral districts for the 2020 election and the deadline has already passed, which puts its current status as illegal. PSPD urged both the ruling and opposing parties to extend the period of the Political Reform Committee which is supposed to adjourn at the end of June, and complete redrawing of the electoral precincts as soon as possible.

The recent inaction of the National Assembly explains why so many citizens are asking for political reform as well as National Assembly reform. Citizens who were once on the streets with candles to mass protest now impeached President Park Geun-hye, want politicians to do their job as opposed to just looking out for their vested interests. PSPD and NGOs held a press conference on June 17 to demand electoral reform, the freezing of the National Assembly budget, and the establishment of an independent body to assess lawmaker's annual salary. All of these are intended to abolish the privileges of lawmakers. The National Assembly has been called ‘inanimate’ and we asked them to return their paychecks if they aren’t going to work.

Public anger at the National Assembly has led to calls for the introduction of a recall system. Despite the controversy of having a recall system, there is no doubt that we need a system of checks and balances to keep an eye on the National Assembly. PSPD proposed starting a discussion of tools that would keep lawmakers in check during their terms, including a recall.

June 3rd marks the 27th year anniversary since the ‘Day for the Homeless’ was declared. In June 1992, tenants who could not endure the pains of rising rents made this day hoping to create a society where ordinary homeless people didn’t have to suffer in pain and despair.

It has been almost 40 years since the Housing Lease Protection Act was written into law, but there hasn’t been much progress with means to protect tenants, such as a right to demand a renewal of the contract or rent control. PSPD has covered this in detail in the June issue of Tongin News with a story entitled ’30 Years of Unchanged Tenant Rights.’ The Center for People’s Livelihood Improvement campaigned in various activities to communicate the rights of tenants in the month of June to celebrate the ‘Day for the Homeless.’

Firstly, a debate was held at the National Assembly with tenants, rep. Joomin Park, and rep. Hongken Park to demand an amendment of the Housing Lease Protection Act. To make sure tenants do not continue to suffer, the amendment must be done within the 20th Republic, which will only be in session for 10 more months. Debaters from the Ministry of Justice, Ministry of Land, Infrastructure & Transport, and from the city of Seoul had agreed on introducing the right to demand a renewal of the contract and promised to work on amending the bill.

PSPD held a joint press conference to press both leading and opposing parties on June 18th with 10 representatives of the Democratic Party, Party for Democracy and Peace, and the Justice Party, who proposed a revision to the Housing Lease Protection Act. The Center for People’s Livelihood Improvement will work even harder through the rest of the 20th parliamentary session on the bill amendment to protect tenants, which is one of our top priorities. 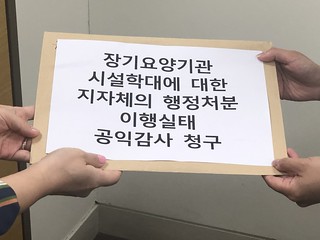 On June 15, to commemorate World Elder Abuse Awareness Day, the Committee for Social Welfare demanded a public audit on how the Ministry of Health and Welfare are conducting their duties to handle abuses found in the long-term nursing facilities and how local governments are disciplining those facilities.

According to a report issued by the Ministry of Health and Welfare, a majority of abuse cases happened in elderly health care facilities covered by the Long Term Care Insurance Act, with serious abuses such as physical abuse, neglect, and sexual abuse occurring frequently. Considering many cases of elderly abuse are concealed, there could be more cases we don’t know about.

Local governments are responsible to determine whether such abuse is in accordance with Article 37 of the Long-term Care Insurance Act (Cancellation of Designation as Long-Term Care Institutions) or Article 39-9 of Welfare of Older Person Act. However, some local governments say that even though the CCTV video evidence of the abuse of caregivers is clear, there are cases where simple warnings are given under the administrative order of the Social Welfare Business Act, which is much more lenient than the Long-Term Care Insurance Act.

Even cases that were proven abusive after months of inspection and committee meetings were not properly disciplined, so it is hardly expected that such abuses will be stopped or prevented in the future. PSPD will see if actions taken against these abuses by the Ministry of Health and Welfare were proper or if the Ministry neglected its supervision duties. 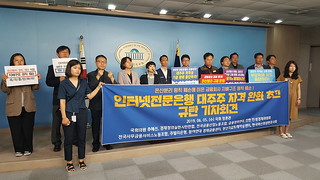 For a non-financial corporation, such as an Information & Communication Technology (ICT) company, to qualify to become a major shareholder of a financial institute, the company must not have had been found guilty of any violation of laws and regulations, such as the Fair Trade Act, over the past five years.  KT and Kakao, who decided to become the major shareholders of K Bank and Kakao Bank, respectively, are no longer eligible for major shareholder eligibility.

The Moon administration and the ruling party made it public that they are open to the possibility of amending the bill to loosen the qualification of becoming a major shareholder for online-only banks. It is absurd for the government to consider lowering the threshold for unqualified individuals at a time when a penalty was imposed on KT for collusion, and the prosecution has brought a case against them which put the qualification evaluation on hold. Both Kiwoom Bank and Toss Bank were determined to be "inappropriate" during the 3rd Online Bank Accreditation Review.

The Banking Act, the Internet Banking Act, and the Financial Investment Service and Capital Markets Act require major shareholders to meet the social credit requirements, including financial laws and fair trade laws, as well as financial factors such as investment capacities and financial status. The reason is that financial firms manage the wealth of financial consumers and provide funds to economic players. The Majority Shareholder Eligibility Test is a common principle across financial institutions, and should also apply to online-only banks.

The Center for Economic Finance held a press conference with financial consumers to denounce and urge the government and the ruling party to stop their push to ease of gaining the status of a majority shareholder at online banks. In 2018, the government and the National Assembly enacted the "Special Act on the Establishment and Operation of Online-only banks" with more haste than caution despite all the controversies and objections. 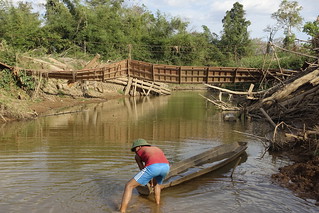 Almost 100 people are either confirmed dead or missing and over 6,000 people lost their homes back in July 2018 from the Xe-Pian Xe Namnoy Dam collapse which was being constructed with funding from the Official Development Assistance of South Korea. People who were living in peace lost their beloved ones, were displaced from their homes, and have been living in a camp without a proper apology or compensation.
SK E&C was building the dam with the Korean government, and SK’s position was that they would not take any action until the Laotian government announced their official inspection results. At the end of May, the National Investigation Committee of the Laotian government stated that the collapse was caused by human error. The Korean government has been silent ever since, and SK E&C criticized the investigation of the Laotian government, stating it lacks scientific evidence and data, and how it was based on inference.
On June 17, the Center for International Solidarity, who has been working with the Korea Civil Society Task Force Team for the Xe-pian Xe-Namnoy Dam collapse, co-presented a petition to the National Contact Point of OECD against SK E&C, the export-import bank of Korea, and Korea Western Power for violating guidelines for multinational corporations. The taskforce also demanded a swift and responsible response from the related parties for a thorough investigation, appropriate recovery of the damage, and official compensation. Transparency was also demanded regarding whether or not a study on environmental influences on development was properly conducted, whether safeguards were in compliance, etc.
As a contributing member state of the ODA, South Korea must be held accountable for the tragedy. SK E&C and other business partners must take all necessary actions to properly restore the damages, compensation individuals, and ensure that this kind of tragedy doesn’t repeat itself. The Center for International Solidarity of PSPD will push forward a systematic improvement campaign to make sure safeguards are mandated.

2019 Social Dialogue for Peace and Unification of the Korean peninsula 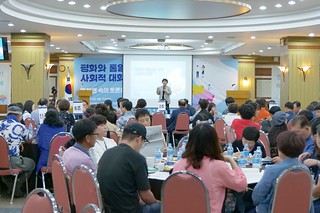 The Citizens' Conference on Peace, Unification, Vision and Social Dialogue, which kicked off on April 30, started its social dialogue at four locations in Korea and two in North America, starting in Honam on June 1, Chungcheong on June 15, Youngnam on June 29, the metropolitan area on July 6, Seattle on June 21, and Los Angeles on June 25.
The Citizens' Conference on Unification Vision, which is joined by the Center for Peace and Disarmament of PSPD, is an organization founded by citizens from all walks of life across the political spectrum to promote and form agreements for peace and unification on the Korean Peninsula. Last year, 17 metropolitan cities and provinces held public discussions to confirm the possibility of national unity and peaceful unification.
In order to exclude ideological bias and increase credibility in social dialogue in the Honam region and Chungcheong region, around 200 representatives were selected based on sex and age groups from the conservative, moderate, and the progressive parties in the Honam and Chungcheong regions. There were thoughtful discussions about ▲ The future of the peninsula after a peaceful reunification ▲ The priority of denuclearization ▲ How to overcome North-South conflicts and consensus development ▲Conditions of humanitarian aid to the North
Thoughtful discussions were rather new to the majority of the participants. They presented themselves with mutual respect, proving a mature sense of humility. Some found the discussion process very interesting and expressed their willingness to continue to take part in the dialogues.
The sessions in Seattle and LA were the first discussions between the conservative and the progressive parties, and were represented together in the Korean-American community with representative Moo-Sung Kim participating and debating ‘the future of the Korean peninsula’ and ‘conditions of humanitarian aid.’ The Korean-American Community in Seattle and LA have experienced internal conflicts in ideology for a long time, so we hope that this public discussion provides a means to solve the internal conflicts and move forward together.
The Citizens' Conference on Unification Vision will begin with social discussions in 4 regions and will gather opinions through discussions held in 17 cities and provinces, and discussions with ethnic Koreans in the United States and Japan. Based on the results derived through the discussions, we plan to hold a comprehensive meeting between September and October to draw up a final agreement for next year. We ask for your interest and participation.