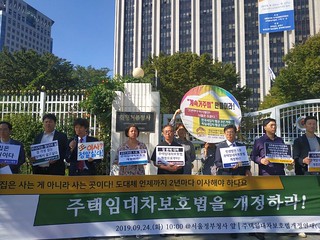 The last regular session of the 20th National Assembly opened late. PSPD presented 25 goals for the people's livelihood in six categories that must be addressed by the National Assembly, and selected and presented three objections.

First of all, before the general election begins, the amendments to the election law must be handled, including the linked proportional representation system, which should be fast tracked. The reform of the prosecution and the National Intelligence Serivce(NIS) is an timely challenge. The government should set up an agency that guarantees full indictment rights, and the National Assembly should step-up to reform the NIS by reorganizing its functions and strengthening control. The National Assembly should impeach judges involved in judiciary power abuse in the name of the people, and proceed legislative discussions to prevent a recurrence.

The revision of the Housing Lease Protection Act to stabilize the common people's residential price and the establishment of an institutional system to reduce the burden of household communication costs (internet and phone bills) are also cited as urgent tasks. The PSPD will also work hard to ensure that bills that can prevent illegal behavior of conglomerate owners can be legislated.

If the Hormuz dispatch which is unconstitutional is discussed, the National Assembly should oppose it clearly and propose alternative service proposals that meet reasonable and human rights standards, depending on the purpose of the Constitutional Court's decision. Meanwhile, PSPD called on the National Assembly to urge the government to put a brake on the reckless deregulation it is pushing. In particular, the Personal Information Protection Act, Credit Information Use and Protection Act, Promotion of Information and Communications Network Utilization Act, and the Information Protection Act which allows the reckless commercial sale of personal information should be withdrawn. PSPD also urged the government to stop discussing the extension of the flexible work unit period and the revision of the Minimum Wage Act, which would further delay working conditions and pay to be improved.

A Campaign to Revise the Housing Lease Protection Act

The government and the ruling party agreed to extend the lease period to four years if tenants choose. Better late than never considering half of the people living in the country as tenants. Some worry that the right to renew a contract will increase the deposit amount and monthly rent, but we don’t think that will be the case. Last year, under the Commercial Building Lease Protection Act, the contract renewal period was extended from five years to ten years, and the maximum rent increase was lowered to five percent, but there was no significant increase in rent for new tenants.

In addition to the introduction of the right to renew contracts for housing rentals, the Center for People’s Livelihood also calls for the revision of the law to expand the ceiling on the 5% rent increase rate to the renewal of contracts. We will work harder to achieve the stability of the people's housing and the protection of tenants through the revision of the Housing Lease Protection Act, including the introduction of the standard rent system and the monthly rent report system.

On September 23, the Center for Judicial Watch of PSPD held a forum titled <Kim Myung-soo's two years in office and how far has the judicial reform come> to diagnose and assess court reform and discuss a strategy.

Looking back on the last two years in terms of judgment, Lim Ji-bong, the Chair of the Center for Judicial Watch, pointed out the importance of diversifying the composition of the Supreme Court justices in his first presentation. After Chief Justice of the Supreme Court Kim Myung-soo's term began, the Supreme Court Justices were comprised more of than just male SNU graduates in their 50s. This resulted in diversification of the composition of the Supreme Court and a change in their rulings. There were rulings to correct the past, including the ruling to win compensation suits for victims of forced labor in Nippon Steel Company. And notable rulings have been made in terms of the protection of the rights of the minority and the weak and economic democratization. It is also positive that the 'balance of liberals and conservatives' has greatly reduced the percentage of unanimous rulings in the supreme court decision, and that there are intense debates among the justices.

On the other hand, criticism continued when it came to the punishment of those responsible for judiciary power abuse scandal and judicial administrative reform. Professor Han Sang-hee(Konkuk Univ. law school) of the Center for Judicial Watch said there is no noticeable improvement in the current state of the judicial administration system reform. In particular, he pointed out that given the composition and role of Supreme Court Chief Justice, Kim Myung-soo, there is little possibility of decentralizing or checking the ‘imperial’ power of the Supreme Court chief justice, as it is only an advisory council that deals with matters that are subordinate to the chief justice. He said that efforts should be made to embrace the judicial needs of civil society democratically and effectively to reform the judiciary that captures the will of the candlelight vigil.

Finally, Kim Ji-mi, a lawyer and chairman of Law Commission of MINBYUN- Lawyers For Democratic Society Law Commission, pointed out that discussions on judicial reform have disappeared from the National Assembly and the government. She emphasized that the unification of judicial officers, the establishment of law schools, and the trial of public participation proposed by the judiciary reform committee of the participatory government are in place, but still need to be developed and expanded. She stressed that discussions on the appeal system being pushed by Chief Justice Kim Myung-soo should be carried out transparently and that it is time to discuss concrete measures on the introduction of the national litigation systems, the reform of the military legal system, and the activation of public interest litigation.

Panel Discussion on the Regulation of Conglomerate Families' Private Interests 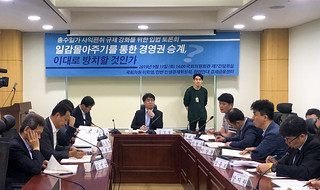 The conglomerate owners, who control the entire group with a small share, are creating various illegal and expedient laws to succeed the management rights with a small amount of money. The method of increasing the size of a small affiliated company owned by the second and third generation of the family members by giving work to them and avoiding regulation through mergers and acquisitions has become the formula for expedient management succession. The more serious problem is that the laws and systems that need to regulate private interests are not keeping up with reality. In response, the Center for Economic and Financial Justice held a panel discussion to introduce examples of private interest and an expedient management control succession of the conglomerate family members of Hanwha, Taeyoung and Hoban groups and seek legislative alternatives to control them.

To prevent the repetition of such cases, related regulations such as the Monopoly Regulation and Fair Trade Act, and the Commercial Act should be strengthened. Currently, under the Monopoly Regulation and Fair Trade Act, the regulation on private interest is applied only to conglomerates over a certain size, and companies that are indirectly controlled by family members are not subject to the regulation on private interest, and it is difficult to prove "injustice" in the court. Therefore, these should be revised. Besides, we need to revise the enforcement ordinance of the Monopoly Regulation and Fair Trade Act, which will lower the equity ratio of a listed company to 20% from the current 30%. To strengthen the independence of the board of directors, separate selection of audit committee members, independent outside directors, intensive voting, a step-by-step electronic voting system, and multi-representative litigation should also be introduced. 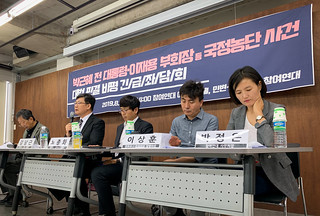 The Supreme Court has set aside the verdict of the Appeal Court on Park Geun-Hye, Choi Seo-Won(Choi Soon-Sil), and Lee Jae-Yong. It also outlined conflicting decisions by the second court trial. The Supreme Court has ruled a guilty verdict to major criminal charges, including Park Geun-Hye's bribery. It also recognized the existence of Samsung's ownership succession scheme, what was given in exchange of providing bribes, the additional 5 billion won from Chung Yoo-Ra's three horses, and the funds for the gifted center. A day after the Supreme Court ruling, the Center for Economic and Financial Justice quickly held a forum to review the Supreme Court's ruling on Choi Soon-sil’s state monopoly administration.

The Supreme Court's ruling is significant in that Lee Jae-Yong admitted to charges of collusion between politics and business, reversing an appeal which saw Lee Jae-Yong as failing to reject the regime's cowardice. A felony must be sentenced by the Appeal court following the intent of the Supreme Court ruling. Also, since the ruling recognized the existence of the ownership succession scheme, the Samsung Biologics’ accounting fraud, which had been claimed to be an unrelated issue, should be reevaluated as part of the succession process.

We clearly remember that the judiciary has given lenient sentences, including suspended sentences, to conglomerate owners who are living economic powers. The core of the Park Geun-hye, Choi Soon-sil scandal is a collusion between politics and business. To restore constitutional order and break off the ties between politics and business, such a process must be carried out in a fairer and more just manner than any other trial. The PSPD will continue to monitor the trial of this scandal.

The PSPD has long called for expanding information disclosure and increasing transparency in the defense and foreign affairs sectors. On September 17, the Center for Peace and Disarmament filed an administrative lawsuit against the Board of Audit and Inspection (“BAI”) for canceling a decision which withheld the results of an audit of a project to introduce next-generation fighter jets (F-X). The F-X project is the largest arms acquisition project in the country’, costing about 7.7 trillion won in taxes to buy 40 Lockheed Martin F-35A fighter jets.

Previously, the BAI conducted audits on ‘the selection of next-generation fighter jets’ and ‘the progress of the F-X business trade practices’. And although it found that there were problems related to illegal and false reports, it didn't disclose them. When the PSPD requested information to be disclosed, the report's 'table of contents' and 'problem' were all closed for 'national interest'. The inspection of the weapons procurement project, which has been under constant suspicion in the selection process, revealed problems, but the related data was not disclosed at all. This seriously violates citizens' basic right to know and denies the purpose of inspection. For democratic control over the defense and foreign affairs sectors, it is essential to fix chronic information privacy practices. Starting with this lawsuit, we will do our best from beginning to end to figure out the problem of the project to introduce next-generation fighter jets, which has been criticized as 'of the F-35, by the F-35, for the F-35'.