The government’s plan to legislate the National Employment Support System is just the legislated version of the Employment Support Package and it has not fully supplemented the problems of the current measures. PSPD Committee for Social Welfare will further request as well as monitor the further steps taken for redesigning of the measure that would truly become an unemployment assistance and further guarantee the minimum income in response to the unemployment and closure of workers hired under the instable conditions and small business owners that are excluded from the employment insurance.

ISDS (Investor-State Dispute Settlement) is a measure when the interest of a foreign investor has been harmed by the change in the policy of a country that one invested in and in such cases, one can file for a private arbitration against the country concerned. Since Korea-US FTA negotiation from 2006 to 2007, civil society organizations have initiated ISDS as an opposition movement for invading judicial sovereignty and disrupting the public policy. And during this period, the South Korean government has dismissed the concerns from the civil society organizations, saying that there will not be any dispute.

However, after the Lone Star in 2012, the investment disputes against the South Korean government are occurring frequently such as Elliott, Hanocal, Mason, Schindler. And according to the World Investment Report at the UN Trade Development Conference in 2019, the US-Korea FTA is the third most ISDS dispute-evoking in the world. In this context, the international community has reached a consensus on the need to improve ISDS has spread and the UN International Commission on International Commerce Law has initiated a working group to reform the ISDS mechanism since 2017. This year has reached the final stage to receive submissions from all the member states for suggestions in reforms.

Since the Lone Star in 2012, the SK government has been involved in arbitration of 10 cases and accumulated arbitration claims exceeded 13 trillion won, including money spent for both arbitrators, lawyers as such which are all from the national tax. In response, PSPD has formed <ISDS measure reform taskforce> and began the activities against the government and the national assembly. Before the South Korean government submit the suggestions for reforms to the International Commission on International Commerce Law, civil society organization has drafted “ISDS mechanism reform suggestion” and presented it to the National Assembly as well as circulated to the relevant ministries like the Ministry of Justice and Ministry of Foreign Affairs.

Against the Unreasonable and Unconstitutional Dispatch to the Hormuz Strait

As it was reported that the Korean Cheonghae Navy dispatched to Operation ATALANTA has sailed to the Aden Sea with military equipment on the 13th of August, there are growing concerns over the South Korean navy being dispatched to the US-led military coalition. This is clearly the violation against the Constitution. PSPD Center for Peace and Disarmament criticizes the United States’ pressure to dispatch the Korean Force and called for the South Korean government to firmly deny the unreasonable demand by the United States. We have pointed out that the dispatch of Korean force is a clear violation against the principle of international peace as written in the constitution through presenting the position against the dispatch, holding a press conference with other civil society organizations and the national assembly with Kim Jong Dae from the Justice Party and delivering a statement.

As we are sending troops to ‘ensure the safety of our ships,’ diplomatic efforts and peaceful means must always be the utmost priority in seeking resolutions. In addition, the relocation or expansion of the operation area of the Chung Hae Unit is beyond the scope to dispatch to the Aden Sea to combat piracy in the protection of the Korean ships and therefore requires a distinguished consent from the National Assembly.

So far, Iran has never presented any hostile positions or measures against South Korea and there were not any reported threats to the Korean ships in the Hormuz Sea. Recently, the Iranian government has requested the South Korean government to ‘not stand in any position and stay neutral regarding the dispute around the Hormuz’ and ‘not participate in the military alliance.’ As the State Parties to the Iranian Nuclear Agreement concentrating on remaining diplomatic arbitration, there is no reason for South Korea to unilaterally nullify the nuclear agreement with Iran and to take sides with the United States in exuberating its forces who blocked all Iranian oil exports. 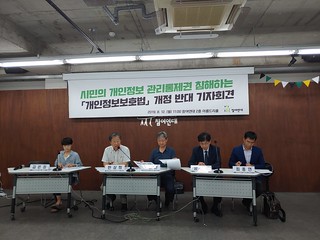 These amendments commonly contain contents that are intended to restrict or eliminate the control of information subjects so that personal data can be accessed by companies without consent from the subject of the information. Moreover, there is a clearly procedural problem for omitting the legislative notice and processing comments from the public despite being a comprehensive amendment to change the overall information system. Before initiating the standing committee, the Information Human Rights Project issued a statement indicating problems of these amendments and delivered to the National Assembly, the Blue House and the Ministry of Public Administration and Security. In addition, there was an encounter with Chun Hye-Sook, the chairperson of the National Assembly’s Administrative Safety Committee, who examines the bill and to whom the clear message delivered that the amendment is procedurally and substantively problematic.

The amendment of the Personal Information Protection Act for the promotion of the data industry is an extremely risky attempt that may undermine the foundation of the personal information protection system. PSPD will continue to participate actively by meeting with committee members of the Administrative Safety Committee and holding debates over the risk of amendments.

‘Expensive and yet Not Working 5G’ Registration for the Dispute Mediation 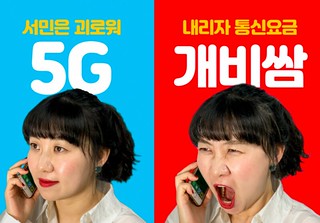 The utilization of 5G has passed 100 days but citizens’ complaints in using LTE have been increasing despite paying expensive fees due to lack of base stations. Many have registered due to its fast availability but it is not working within facilities and inside subways and there are no 5G stations except in the metropolitan and in the transition to LTE, cellphones are often not working so some set the LTE in priority mode. The problem is that many 5G registers had registered such expensive plans only with the bright sides of the explanation such as giving more disclosure grants and not enough information on the problems. PSPD stepped in response to the situation where phone companies are only responding to the complaints by saying that it is inevitable until more base stations are established.

The Center for People’s Livelihood Improvement gathered citizens to file for dispute settlement as a group of Korea Consumer Association Council’s Autonomous Dispute Resolution Committee on unstable sales of 5G services. If you apply for the group reconciliation in early September, we expect that the investigation process will take about three months.

Furthermore, PSPD filed a lawsuit on the 13th of August against the decision on the request in last April for the disclosure of 5G authorization and declaration as well as partial and nondisclosure over the list of the Terms of Use Advisory Committee. Until the Ministry of Science and ICT discloses the data transparently and introduce the universal plan to reduce the communication costs, Center for People’s Livelihood Improvement will continue to work hard to address this issue. 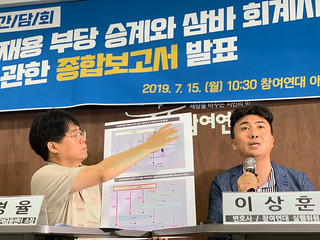 Ever since PSPD has requested the Financial Supervisory Service to undertake a special investigation over the Samsung Biologics fraudulent accounting in February of 2017, there were continuing activities to inform that the merger ratio between Cheil Industries and the former Samsung C & T has been distorted and there are negative influences from the distortion.

The Center for Economic and Financial Justice released the comprehensive report on the unfair succession of Lee Jae Yong and Samba Accounting Incident to supplement the report on the alleged proper merger ratio issued in May. With the additional evidence, the optimal merger ratio between Cheil Industries and the former Samsung C & T was 1: 1.0 ~ 1: 1.36. And as a result, the vice-president Lee Jae-yong's unfair gains amounts to 3.1 trillion to 4.1 trillion won, and as playing the decisive role in the former Samsung C &T ’s merge with its stake of 11.21 %, the National Pension’s loss range from 520 billion to 655 billion won. The succession to Lee Jae-Yong is not a legitimate inheritance but an illegal one to avoid inheritance tax burden. PSPD will not stop the monitoring until the day when the truth of this matter is thoroughly revealed and the corresponding punishments take place.