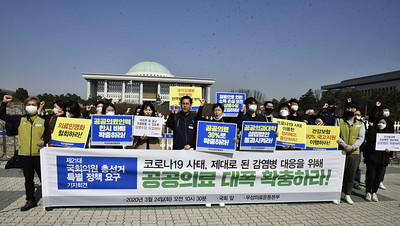 While the citizens, facing financial hardship due to continuously prevailing COVID-19, have been increasing, the government began implementing the several supporting plans. However, those contingency plans hardly suffice the needs of impoverished people. Therefore, PSPD and other Labor-Citizen organizations have been urging the government to design the more progressive policies that focus on supporting those who are vulnerable to social risks such as the irregular workers, small business owners, and marginalized people from the support.

What the possible solutions that have been suggested are: 1) securing employment by expanding the target group for employment maintenance fund, job stabilization fund, emergent business stabilization fund. 2) creating funds by conglomerates and general contractors to lower the commission fee and to financially support the firms that may be shut down.

The tenants are especially in desperate need of help. Therefore, the government and the municipality are urged to allow the tenants to exercise the right to claim for a reduction in the lease of a loan on the commercial law, instead of just hoping the landlords’ goodwill.

Sociopolitical discussion regarding financial support has already been in full swing. Some municipalities have started providing financial support without hesitation. PSPD will continuously make efforts to put together knowledge and to represent marginalized citizens who may not be able to speak out so we, all citizens, can wisely overcome an unprecedented outbreak.

No more money for the US: joint action opposing to agreement

Negotiation on defense cost-sharing has resumed after two months. In fact, delayed negotiation is due to the U.S. that demanded $5 billion (6 trillion Korean won) of an annual defense cost-sharing from ROK. This is nothing but the intention of the U.S. to let ROK take full responsibility for the total cost of the U.S. forces in Korea (USFK), including Indo-Pacific strategic cost.

The center for peace and disarmament and 60 civil society organizations held a joint news conference in front of the Blue House, denouncing the U.S. that intends to receive $5 billion of defense cost and holds the relationship between North and South Korea, and clarified our position of which the Moon Jae-in administration must not succumb to the pressure from the U.S.

The cost-sharing increased by 10% - 30%, which is known as Korea’s proposal to the U.S, is the largest growth, and it is not what the citizens expected. There is even a considerable amount of budget more than a trillion Korean won that has not been executed yet. South Korea is one of those nations being on the top of importing the U.S. weaponry.

Misappropriation of the budget for the defense cost-sharing that has been spent to construct the THAAD site and the problems of the U.S. plan for upgrading THAAD has been raised. The degree of contribution to the site and environmental effects evaluation has not been progressed. Hence, there is no such reason for which ROK has to share the cost in order to make sure of deploying THAAD that is still in temporary placement.

The U.S. must stop excessively demanding. What the U.S. wants have deviated from the range of agreement, Korean employees under USFK unpaid leave for instance. PSPD will ceaselessly be in unity with the civil society organizations to keep taking actions of opposing a settlement of humiliating agreement on the defense cost-sharing.

Despite the fact that MERS prevailed in 2015, the manpower of public health has not been expanded. Rather, the sanatoriums in poor condition and the elderly care hospitals, which have been established throughout the nation only for the means of making money, are revealed to be fragile from infectious diseases. The dominating two major parties, however, have not said even a single word yet about a pledge for expansion of the public health and about a policy for the guarantee of livelihood in this pandemic. Thus, PSPD Committee for Social Welfare and the Headquarters of Movement for Preventing Medical Civilization and Realizing Free Medical Care have released the proposal for the general election policy in order to properly cope with infectious disease and also sent out the questionnaires to each political party.

After COVID-19 having been spread out in the city of Daegu, about 2,300 confirmed cases waited for hospitalization in their houses, and 23% of the confirmed cases lost their lives before hospitalization. The ratio of the public hospital is just 10%, and as a matter of urgency, it should be increased to 30% at least. Then the public health care center should be established in the city of Daejeon, Gwangju, Ulsan, and in the western part of the province of KyungNam. In addition, the government should buy off the Cheongdo Daenam hospital and the Busan Baptist hospital and nationalize the Daegu Dongsan hospital.

From the beginning stage of the COVID-19 outbreak, some seats for the professional personnel in the public health centers and hospitals were vacant. The city of Daegu and the province of KyungBuk especially would not be able to cope with the pandemic without mobilization from the military medical corps and the contribution of individuals. △The manpower in the public health and skilled nursing workforce should be fostered enough to prevent the capacity of the healthcare system to be insufficient. △A national hospital for infectious disease needs to be constructed at least one in each region as it was pledged after MERS. Just like the case of mass infection in the call center, some laborers are in the working condition that does not have them a day off in spite of being sick. This kind of specific working environment causes infectious diseases to hardly be prevented.

The majority of countries in OECD secure citizens’ income if medical treatment happens through health insurance. △The sickness allowance should be introduced. And the plans for supporting livelihood in a disaster situation, such a reduction of medical expenses, should be suggested. △It is also important to restore privatization and commercialization that have been processed under the Lee Myung-bak, Park Guen-hye, and Moon Jae-in administrations. △The establishment of the public pharmaceutical company has been suggested in order to secure the medicines and vaccines for infectious diseases, regardless of being profitable and meeting the break-even point. 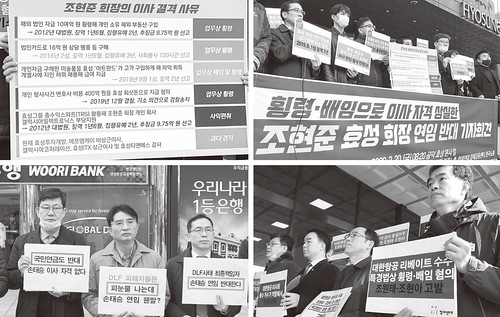 Most of the listed companies have the annual meeting of shareholders (AMS) within two weeks from the middle of March. The Center for Economy and Finance has been urging the National Pension Service (NPS), which is the major shareholder of the listed companies after introduction of the stewardship code – National Pension Fund Trustee Responsibility Principles, to fulfill their duties of improving the anachronistic corporate governance, as NPS is the trustee of citizens’ retirement funds. PSPD and the labor civil society organizations proclaimed dealing with AMS in the year 2020 and focused on urging some corporates that may damage the company value to improve their governance structures.

Of those presented agendas on the AMS 2020, the proposals about the consecutive appointment of HyoSung Group chairman Cho HyunJun, Hanjin KAL chairman Cho WonTae, and Woori Finance Holdings chairman Son TaeSueng have been selected as the one that should be rejected. Accordingly, PSPD announced its position and contributed to the press so we can urge NPS and investors for pension funds to exercise their rights to vote.

Even though HyoSung Group chairman Cho HyunJun had already been judged by the judicial authority due to suspicion of embezzlement, he unrepentantly committed the analogous suspicions of embezzlement and malpractice. Chairman Cho was sentenced the two years in prison at the first trial. Hanjin KAL chairman Cho WonTae was sent to the prosecution due to violation of the Labor Standards Act such as unpaid 24.4 billion Korean won of the annual vacation allowance and unsecured menstrual leave for more than 3,000 employees. Since 2012 when he was appointed as chairman, he also neglected his duty of monitoring as chairman by overlooking the former chairman Cho YangHo’s embezzlement and malpractice. He is completely unqualified. In March 2020, Woori Bank was charged the fine of 197.1 billion Korean won and was sentenced partial suspension of business on mis-selling the Derivative Linked Fund (DLF) that was linked to the foreign interest rate. Besides, due to mis-selling DLF, chairman Son TaeSueng who was responsible for management would be restricted to work in the field of finance for the next three years. He has already been disqualified.

Early in the morning on each day of AMS for HyoSung, Hanjin KAL, and Woori Finance Holdings, PSPD held a press conference in front of the AMS place and urged NPS to exercise the right to dissent against unqualified chairmen.