The Launch of the Network for Reforming the Police

Despite the power of citizens that has been newly writing a history of democracy, the authorities such as the prosecution, the police, and the national intelligence service still reign over people. Dispersion and reduction of those authorities’ rights and consolidation of democratic regulation have been the agenda for Korean society and civic movement. Fortunately, in the final phase of the 20th national assembly, the installation of the Senior Civil Servant Corruption Investigation Unit and adjustment of prosecution and police investigation rights were achieved thanks to the efforts of civil society and citizens’ support. However, the police ended up holding great power in this process, and therefore, the need for regulation on its organization and function became obvious. As the police are in direct contact with the citizens’ daily lives, they might restrict and intrude on the basic rights of people.

Reforming the prosecution just begun, now it is time for the police to be reformed. As the police are hardly expected to reform themselves, PSPD is going to speak out the voices of citizens and make what the civil community wants reflecting on the process of reforming. 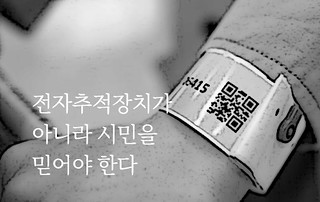 The reason of the world paid attention to South Korea’s COVID-19 response was how its government coped with the pandemic. South Korean government swiftly checked-up the cases and transparently shared information instead of locked up the society and isolated each individual. The citizens supported one another and also cooperated with the government. In addition to the candlelight revolution, the global society appreciates South Korea coping with the pandemic and simultaneously keeping democracy.

Yet, some moments tumbled down our efforts. An electronic anklet had to be a contingency plan for some self-quarantining people due to those who violated the regulation and absconded their places. There was no legal basis to implement the plan. Above all, more than 99% of self-quarantining people were following the rules. It is purely administrative expedient to set a rule for the entire quarantining group, which might intrude the fundamental human rights, only because of few violated the rules. Accordingly, PSPD announced opposition against the introduction of the electronic anklets and stated with human rights organizations. Fortunately, the government set a boundary that only regulates the violators.

Even though the COVID-19 pandemic is an emergency, it does not necessarily mean that every kind of regulation can be justified. When everything is justified, our society would be defeated by a fear of infection, not by a virus itself. Then broken democracy and social trust would be hardly recovered, compared to the wound from COVID-19. The more tough situation we face, the more we will follow the principles of democracy and solidarity. PSPD will be part of civil society to overcome this hardship. 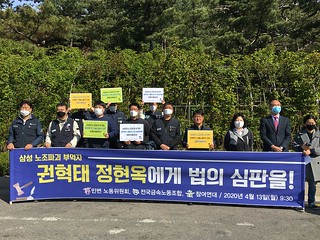 It is ridiculous that a public servant, who was supposed to take care of the labor rights in the industrial environment, led the laborers to the end of the rope. The year 2013, since the MEL had condoned an unlawful action of Samsung, the Samsung group began the program disintegrating its labor union. As a result, a lot of workers suffered, and some of them even committed suicide. Based on the result of which illegal worker dispatch was not illegal, Samsung was enabled not to directly hire the laborers. Besides, it could protect its anti-constitutional management policy that does not embrace the labor union.

The court of the first instance acknowledged both that the service center of Samsung Electronics had been running with illegal dispatching and that occasional labor supervision had been wrong, which had started with an indulgence of the MEL on Samsung’s disintegrating the labor union. The board members and the employees of Samsung, who had involved in disintegration, were imprisoned. However, the former and incumbent executives of the MEL, who had condoned the change of the supervision results, became acquitted. The former director of the Seoul Regional Employment and Labor Administration, Kwon HyukTae, is still on a top position in the MEL.

PSPD raised an issue of employment of those public servants and opened the press conference on the 13th of April when the appeal trial was in progress. PSPD will continue to monitor the results of trials and raise the issues. 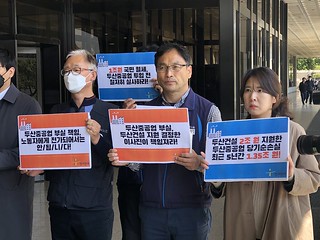 On March 27, Industrial Bank of Korea and the Export-Import Bank of Korea announced bailing out Doosan Heavy Industries (DHI) with one trillion won as a loan ceiling. The blame game kept going on during the process. The opposition parties and some media severely condemned that the crisis of Doosan was all because of the anti-nuclear energy policy. However, a failure of Doosan was due to obtaining orders that lower the costs and the financial aid for its subsidiaries such a Doosan Construction.

Doosan Construction became fail to manage since Doosan We’ve Zenith apartments had considerably been unsold. Hence, the Doosan group started pouring lots of finance into Doosan Construction. Nonetheless, its financial situation did not recover. It finally led the company to delist and be a 100% subsidiary of DHI. Doosan Heavy Industries also could not create the net income earned during a period from the year of 2014. The net loss during the terms from 2014 to the end of 2019 is almost 1.94 trillion won. This is a typical case of corporate group management failure derived from irrational financial aid to a collapsed subsidiary.

It would be also irrational if public finance fluxed into it without clarifying who responsible for failed management is. Just like the case of Daewoo Shipbuilding, bailing out Doosan will become a waste of one trillion-won public finance. Therefore, it should be prior to making sure both who are responsible for the crisis of DHI and how they try to solve a problem.

This is why PSPD prosecuted DHI and its board members. We will keep an eye on them whether they are going to take a bailout without being responsible for the failure and to play innocent.