No Budget to Set Up Public Hospitals In COVID-19 Situation?

Even though the country is in the COVID-19 crisis, there is no fund allocated for establishing public hospitals out of 555 trillion won of the national budget. Moreover, budgets to reinforce local medical centers and Red Cross Hospitals and the budget for training personnel in medically fragile regions were reduced. This budget bill shames the governmental projects the ruling party claimed to achieve, such as the expansion of public medical facilities and closing the regional gap of medical services. From November 3 to 6, we carried on with press conferences and one-person demonstrations to urge the strengthening of public health care overall, such as budget allocation for the nationwide establishment of public hospitals and extending public sickbed, building public hospitals specifically for dealing with infectious disease, and arranging policies for founding public school of medicine. Along with them, we brought the demands of the civil society to hold a meeting with congress members of the health and welfare committee and pressed on the extension of public health care.

It is not just a problem in the health care budget. In the middle of a crisis such as COVID-19, the government should increase its expenditures to provide a social safety net to protect the civilians in need. However, the fiscal rule of the Ministry of Economy and Finance recently announced to adopt was designed around the fiscal health of the nation, such as the government debt ratio. We hosted a forum to indicate the problems in it.

On the other hand, the government had suggested the “Korean New Deal” as a method to get out of the COVID-19 economic crisis. However, the Korean New Deal largely consisted of developmental projects decorated with titles such as “digital” and “green”. We pointed out the problem of the budget of the Korean New Deal through reports and press conferences, of how the quota for strengthening the social safety net was set trivial or worse, decreased in amount. Adding on to that, we demanded the project to encompass revitalization of the domestic economy, protection of the vulnerable social group, and action against the climate crisis.

The priorities in the budget would shift according to the situation Korea is put in. While the budget for public health decreased, the 2021 defense budget increased by 5.5%. The need for adopting weapons on the allocated funds for light aircraft carriers and nuclear-powered submarine development is debated, and neither do they help establish trust with North Korea. The Center for Peace and Disarmament expressed this through a written report on the 2021 defense budget.

Laborers, Retailers, and Consumers Should Live Too! 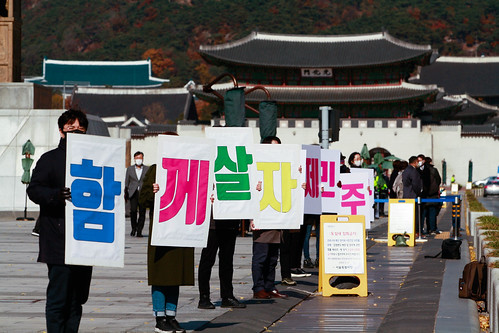 The net profit of the listed firms in the third quarter is known to have increased by 81%, despite COVID. However, the National Statistical Office announced that the labor income decreased, especially for those in the lowest 20% income group, due to the employment shock COVID-19 has brought. This phenomenon stands to present an even more intensified “K-polarization”. COVID-19 crisis is further deepening inequality and disparity.

Under this situation, the Commercial Act, Fair Trade Act, and Financial Corporations Monitoring Act, together commonly known as the “Three Laws for Fair Economy”, along with Class Action Act for remedies of consumer damage and recurrence prevention, and punitive damage reimbursements are emerging to be discussed and adopted. Along with these topics, the Distribution Industry Development Act that guards against the monopoly of distribution corporations and the Subcontracting Act for coexistence with the subcontracting and resolving the wage gap are also necessary.

However, the legislation prospects are dim. Among the three acts for the fair economy the government suggested, the revised bill for the Commercial Act was initially a retrogressed version from the revised bill the Democratic Party of Korea in the 20th Congress adopted as a party platform, and what the Ministry of Justice announced prior to legislation in 2013, but it backstepped even further considering the proposal the executive secretary of the related standing committee suggested, saying “it shouldn’t go in the direction of trapping the firms”. In order to prevent the recurrence of various consumer damage accidents such as the Humidifier Disinfectant Case, DLF, LIME, Optimus Investment Scam, Series of BMW engine fire accidents, and personal information extrusion in financial institutions, credit card providers, and internet portals, the Ministry of Justice issued a prior announcement of legislation of Class Action Act and punitive damage reimbursements, but the ruling party is not confirming its will to pass the bills within the year.

We declared November 9th the day of democratization of the economy, matching Article 119 of the Constitution Law on the topic, in order to press for the legislation of Three Laws for Fair Economy, etc. We hosted press conferences, discussion forums, and petitions for the legislation of democratization of the economy. Along with it, we are continually contributing to the press and make various content for more friendly access to the information, concerning a quality delivery of the content and the purpose of the law, which may be difficult to grasp.

Against the Backsliding Reform of the Police and NIS 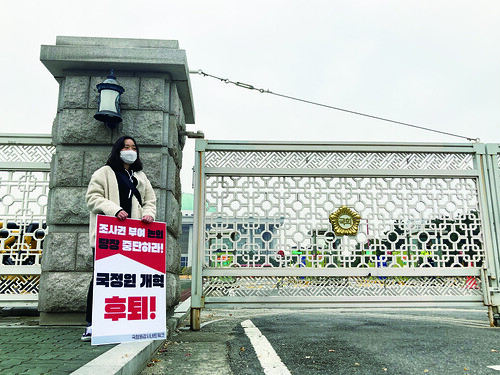 The reform of the authorities that the civilians of the candlelight expected of the police, National Intelligence Service (NIS), and establishment of the Corruption Investigation Office for High-ranking Officials (CIO), are very slow-footed. Not only the speed is problematic, but regressed versions from what the government and the ruling party initially promised are now being discussed in Congress. We voiced its opposition against the backsliding reform of the authorized agencies and pressed Congress. While the government and the ruling party pledged the abolition of the anti-communist investigation authority and the transfer of investigative power, the Democratic Party recently suggested a “compromise” of delaying the transfer of anti-communist investigation authorities and leaving them to the NIS. This traverses the purpose of the NIS reform. The anti-communist investigation authorities that are not clear in concept are apt for bringing even bigger controversies of human rights violations.

The amendment of the Police Act is a necessary reform legislation project for the police reform, whose authorities are getting excessive gearing with the investigation rights adjustment between the police and the prosecution, and the transfer of NIS anticommunist investigation authorities. However, the government and the ruling party are trying to legislate the proposal of Kim Young-Bae (Democratic Party), a recreated version of what the Reforming Committee of the Police suggested. What is coming forth is the “Local Police System in name only”, since the reform of the National Police Commission for democratic control over police and independent ombudsperson or inspector is not reflected at all, while the Local Police System is adopted on a limited -- city and province-level with the reason of budget.

Especially regarding the downsize and the repeal of the intelligence police that was never free from political intervention, no practical content was endorsed. The candidate recommendations for CIO are also being delayed, again marking a retreat without any notable results of the authorities' reform, advocated by the government and the ruling party.

We submitted statements of opposition regarding the retreating bills on the reform of the authorities to the Intelligence Committee and the Public Administration and Security Committee of the Congress and continued with the press conference that calls for an end to backsliding discussions of the reform and one-person demonstrations. Civilians did not raise candlelights last winter for reforms only in name. Their calls were to properly repair the agencies in authority so that they will never again be able to intervene in politics and abuse their power to set back democracy. We will work until the end to defend the purpose of the reform, empowerment of agencies, and democratic control.