Spring again, and we remember the Sewol Ferry

Some hearts are determined to remember the promises of April 16, 2014, and continue on the actions in daily life. Starting from the campaign to “Color the Seochon Yellow” in 2015, the first year after the Sewol Ferry Incident, PSPD has been managing “Seochon Yellow Ribbon Factory” so that the people can make the yellow ribbon themselves and share them, all to keep remembering the disaster in our daily lives.

This year is already the seventh year since it happened. Since it is now difficult to see face-to-face due to the COVID-19 situations, we prepared Yellow Ribbon DIY kits that include the needed materials and instructions, so that the people can make them on their own and share them with their family and friends. The kit was a huge blow and applications rushed in, and we sent 500 people DIY kits that altogether could make 28 thousand ribbons. The funds were provided through donations through “Kakao Together”, through which over 3,500 people participated in small donations.

We shared the yellow ribbons with the small stores in the Seochon area, near Gyeongbokgung station, in which the PSPD office is located. We remember the words of the bereaved family from the accident that they are soothed by the yellow ribbons on people’s bags and purses on the street, by the fact that people have not yet forgotten. PSPD will continue to act in our lives with the people until all are safe in this society. 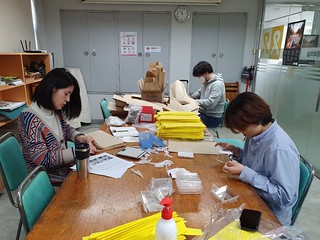 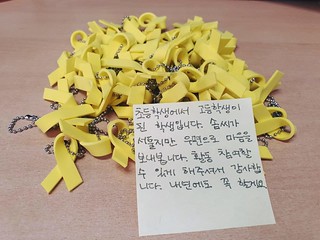 The Amendment on the Special Act on Public Housing has passed the plenary session. This happened in 22 days since PSPD and Minbyun brought up the prior real-estate speculation issue of the employees of Korea Land and Housing Corporation(LH) on Gwangmyeong and Siheung, the cities going through the third round of development plans, and 14 days since the two civic groups submitted legislative petitions by the introduction of Rep. Sim Sang Jung. The amendment widened the range of the people subject to punishment to include the ‘employees of a public housing project operator’, the ‘former workers’, and the ones who obtain the information from the employees, etc.’ when they engage in real estate transactions using undisclosed insider information. Moreover, to prevent speculation using insider information before it happens, the Minister of Land, Infrastructure, and Transport has been made responsible to carry out frequent checks and fact-finding missions. If an official is caught using insider information, the official will be fined three to five times the profit (or one’s avoided loss), and new provisions are in place for confiscation and additional collection. These changes are important in that the revision implemented an effective monitoring system over the illegitimate property transactions of the government officials and a thorough punishment and restitution mechanism on the profits they pocketed.
The revision to the Public Service Ethics Act also made its way through the session. Now the officials engaged in real-estate-related assignments will be obliged to declare their assets and be restricted in obtaining new real properties. Since this round of revision was focused on countering future LH scandals, the subject assignment was restricted to the real estate section. The compulsory asset declaration requirement and the range of the public objects should be expanded further for more transparency, and the subjects to be examined for the ‘relevancy to duty’ to include real estate as well as stocks so that once the property is found to be relevant to the duty, it could either be sold or the applicable official could be excluded or their position to be changed - so that measures could be taken to resolve the conflict of interests.

Although only farmers can own farmland as per the Constitution, numerous loopholes within the Farmland Act permit the misuse of farmland as a mode of speculation and allow insufficient supervision of falsely registered farmland. PSPD and Minbyn have thus investigated farmland transactions in Gwarim-dong, Siheung-si—a city within the imminent third new town project---of the last three years. 1/3 of the 130 cases investigated had violated the Farmland Act. During a press conference on April 8th, PSPD emphasized the need for an intensive survey of all domestic farmland and a drastic reduction of exceptional clauses to the Farmland Act that sanction farmland solely for agricultural use while allowing their ownership by non-farmers.
Revival of the Excessively Increased Valuable Land Tax Law is also an essential part to terminate real estate speculation. The law would tax idle lands such as illegally converted farmland or empty land according to its excessive appreciation relative to normal land prices. This law was deemed unconstitutional during its initial introduction in 1990 for reasons such as neglecting to deduct its imposed amount from following transfer taxes. Yet, after supplementary legislations, the Excessively Increased Valuable Land Tax Law was decided constitutional in four subsequent unconstitutionality suits. Intensive land speculation has been identified in pre-development areas such as new town housing areas and their surrounding regions. Its prevention requires a taxation plan confiscating profits that exceed increased value from normally increased land prices. The PSPD plans to file a petition for legislation to the National Assembly regarding the Excessively Increased Valuable Land Tax Law and will continue its publicization.

The situation in Myanmar is exacerbating after the military coup as citizens continue their civil disobedience movement despite the military’s violent crackdowns. Oil and gas are the Myanmar army’s biggest sources of income—and the Korean company, POSCO, is behind this tragic situation.

POSCO International, a subsidiary of POSCO, is running a gas field business in Shwe, Myanmar with Korea Gas Corporation(KOGAS). POSCO and KOGAS have 51% and 8.5% shares in this joint venture, respectively. MOGE(Myanmar Oil and Gas Enterprise) is a key source of funding for Myanmar’s military—so much so that Thomas Andrews, the United Nations Special Rapporteur on the Situation of Human Rights in Myanmar, has pressed for sanctions against the company. 15% of POSCO’s profits are allocated to the MOGE, which amounted to over 200 billion won in 2018. Serious human rights abuses have been reported against the conduct of this joint project, including forced migration of residents, land confiscation, and forced labor. The Korean Civil Society in Support of Democracy in Myanmar in association with PSPD has collected 10,000 signatures from people demanding that POSCO sever ties with Myanmar’s military and its slaughter of innocent citizens. 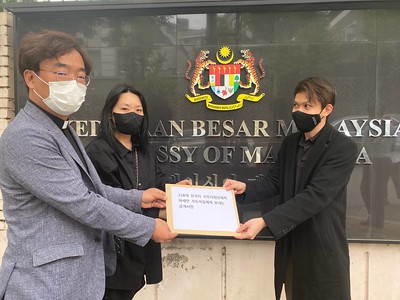 On April 24th, an ASEAN Leader's Meeting was held in Indonesia to address the crisis in Myanmar. The Korean Civil Society in Support of Democracy in Myanmar and 328 CSOs have called upon ASEAN leaders to deny Myanmar’s Commander-in-Chief’s attendance as Myanmar’s representative, to recognize the National Unity Government of Myanmar which has been established by Myanmar’s democratic forces, and to collectively support Myanmar’s democratic forces while imposing sanctions upon its military.
Translated by Hyewon Yoon  (Volunteer of PSPD)
Korean Version>>
이 게시물을